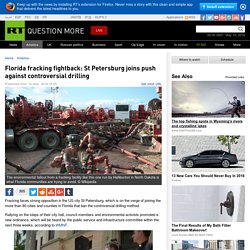 Rallying on the steps of their city hall, council members and environmental activists promoted a new ordinance, which will be heard by the public service and infrastructure committee within the next three weeks, according to WMNF. New research from Environmental Florida unveiled during the event says “fracking laws created as much global warming pollution as 22 coal fired power plants in a single year, and at least 14 billion gallons of wastewater in 2014,” said Jennifer Rubiello, director of the advocacy group. ‘Climate crime scene’: Eco-activists block coal mine, power plant in Germany (PHOTOS, VIDEO) Scientists in a race to learn the origin of man’s best friend. The scientists travelled hundreds of kilometres along the ancient Chinese rivers, looking for dogs. 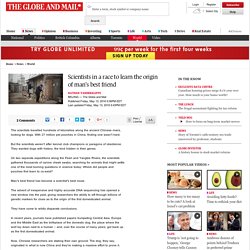 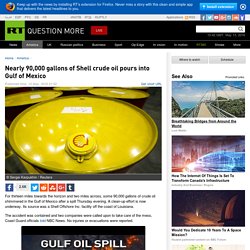 A clean-up effort is now underway. Its source was a Shell Offshore Inc. facility off the coast of Louisiana. The accident was contained and two companies were called upon to take care of the mess, Coast Guard officials told NBC News. Monsanto weedkiller relabeled by activists to expose alleged cancer-causing properties. Activists relabeled bottles of Monsanto weedkiller in hardware stores across Britain on Wednesday in a bid to raise concerns over the product’s health implications. 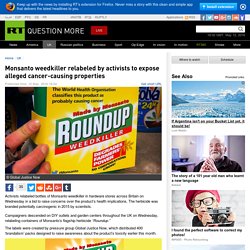 The herbicide was branded potentially carcinogenic in 2015 by scientists. Campaigners descended on DIY outlets and garden centers throughout the UK on Wednesday, relabeling containers of Monsanto’s flagship herbicide “Roundup.” Gentle giant attacked: Rare whale shark hunted, strung up in China (PHOTOS) — RT Viral. Uk.businessinsider. ‘People should be terrified fracking is spreading’ – Australian MP who set river on fire to RT. A Protest That Set a River on Fire. 1985: Inside Brazil's massive Serra Pelada gold mine. Koch Brothers Look West, Set Sights on Mining the Grand Canyon. Get short URL. 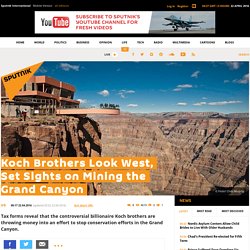 ‘Catastrophic’: Up to 3,500 gallons of nuclear waste leak at Washington State storage site — RT America. Thousands of gallons of radioactive waste are estimated to have leaked at a Manhattan Project-era nuclear storage tank in Washington State over the weekend, triggering an alarm and causing one former worker to label it as “catastrophic. 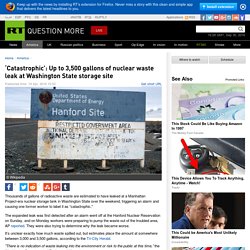 " The expanded leak was first detected after an alarm went off at the Hanford Nuclear Reservation on Sunday, and on Monday workers were preparing to pump the waste out of the troubled area, AP reported. Swifter pace of universe expansion baffles physicists — RT Viral. Japan to Dump Tritium Waste From Fukushima Plant. Asia & Pacific Get short URL The challenge here is how difficult it is to remove radioactive material from the huge quantities of water required to keep melted-down reactors at the Fukushima Dai-ichi plant chilled. 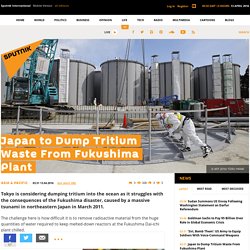 Wild radioactive Fukushima boars breed like rabbits, ravage local countryside. Northern Japan is raising an alarm, as the area surrounding the Fukushima Nuclear disaster zone has been overwhelmed by radioactive wild boars, whose population has increased dramatically over the past 4 years, as they breed freely in the exclusion zone. 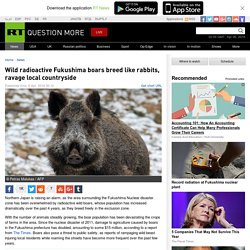 With the number of animals steadily growing, the boar population has been devastating the crops of farms in the area. Since the nuclear disaster of 2011, damage to agriculture caused by boars in the Fukushima prefecture has doubled, amounting to some $15 million, according to a report from The Times. See How Oil Drilling Created an Earthquake Crisis in Oklahoma. In the last few years, Oklahoma has become one of the most seismic places on the planet. 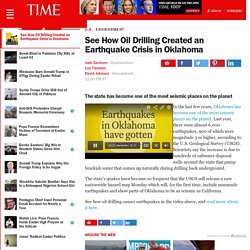 Last year, there were almost 6,000 earthquakes, 900 of which were magnitude 3 or higher, according to the U.S. Geological Survey (USGS). Bad news for bots: Fukushima cleanup robots overpowered by radiation (VIDEOS) — RT Viral. The Fukushima Daiichi nuclear plant is still so toxic that even the robots tasked with cleaning up the site after three catastrophic meltdowns are struggling to ‘survive’. 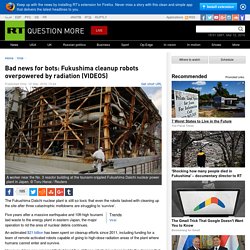 Five years after a massive earthquake and 10ft-high tsunami laid waste to the energy plant in eastern Japan, the major operation to rid the area of nuclear debris continues. An estimated $21 billion has been spent on cleanup efforts since 2011, including funding for a team of remote activated robots capable of going to high-dose radiation areas of the plant where humans cannot enter and survive. However, it has now emerged that at least five of these robots have been lost to the dangers that lurk in Fukushima Daiichi’s severely damaged nuclear reactors and waste treatment buildings. The machines were overpowered by the sheer scale of radiation during an effort to remove melted fuel rods, Reuters reports. READ MORE: Fukushima 5yrs on: Botched response, radiation danger, murky prospects.

Monstrous gas cloud to smash into Milky Way Galaxy with ‘spectacular burst’ A monstrous cloud is now heading to our Milky Way galaxy with enormous speed and is ready to collide with it, scientists said, adding that when it plows into our galaxy, the reaction will trigger star formation and provide gas for 2 million new stars. The Smith Cloud, a high-velocity cloud of hydrogen gas “is plummeting toward our galaxy at nearly 700,000 miles per hour,” said the team of astronomers who have been working with the Hubble Space Telescope. 99-million-year-old fossilized lizard found in Asia, may be ‘missing link’ to ‘lost world’ A fossilized lizard preserved in amber and found in Southeast Asia is 99 million years old scientists have determined. That makes it the oldest ever specimen of its kind and could hold the key to a ‘lost ecosystem’.

Read more The fossil is about 75 million years older than the previous oldest lizard discovered, researchers at Florida Museum of Natural History said. Fukushima causes mutations & DNA damage with ‘no end in sight’ – Greenpeace. Greenpeace has released a new report outlining the environmental and health impacts of the Fukushima nuclear disaster, and warning of long-term consequences lasting decades to even centuries. Stressing there is “no end in sight” to the ecological fallout, the NGO says the impact in a number of areas will continue, which will include but not be limited to mutations in trees, DNA-damaged worms and butterflies, as well as radiation-contaminated mountain water tables.

“The government’s massive decontamination program will have almost no impact on reducing the ecological threat from the enormous amount of radiation from the Fukushima nuclear disaster. Already, over 9 million cubic meters of nuclear waste are scattered over at least 113,000 locations across Fukushima prefecture,” said Kendra Ulrich, Senior nuclear campaigner at Greenpeace Japan. READ MORE: Fukushima medical survey confirms 16 new child thyroid cancer cases. Mercury from Asia rains in Rocky Mountains – study. Rainfall samples show increased levels of mercury are showing up in the Rocky Mountains to the Midwest but continuing to drop along the East Coast, according to a new study.

The culprit is consistent with emissions from coal-burning power plants in Asia. Scientists from University of California Santa Cruz and University of Illinois at Urbana–Champaign analyzed data from a network of monitoring sites in the US and Canada that collected rainwater samples to test them for mercury, sulfate, nitrate and others pollutants going back to 1997. When researchers looked at 71 sites in the Midwest, Rocky Mountain and West Coast regions over the period of 2007 and 2013, they found many sites showed increased mercury concentrations, as much as 2 percent rise per year.

“It’s a surprising result,” David Gay from the University of Illinois at Urbana–Champaign, who is a co-author on the new study, told Scientific American. “Everybody expected [mercury levels] to continue going down. Radioactive honey found near nuclear power station. Newsletter Content » Alex Jones' Infowars: There's a war on for your mind! Russia’s food safety regulator Rosselkhoznadzor just announced a complete ban starting February 15 on all US corn and soy imports. This is a huge blow to organic and GM farmers alike, though the ban will be instated due to genetically modified crop and microbial contamination.

‘We proved Einstein right!’ 100 years on, gravitational waves confirmed in breakthrough research. Why Recycling Plastic Bottles Doesn't Help The Problem (Video) Photo by stephendepolo via Flickr CC. BOTTLED WATER: Pouring Resources Down the Drain. Bee virus pandemic is human made, started with European bees - study. Uk.businessinsider. Welcome. What has the U.S. government been hiding about the Fukushima nuclear disaster? A massive ongoing gas leak in southern California is being compared to the 2011 Fukushima disaster. A recently declassified US government report found that the Fukushima catastrophe was far worse than had been originally reported, prompting many to wonder how severe the California gas leak really is. Methane, a greenhouse gas 70 times stronger than carbon dioxide, has been spewing into the air from a natural storage gas site in southern California for almost two months, and it isn’t expected to be fixed until this spring.

Planet Nine. Planet Nine is a hypothetical large planet in the far outer Solar System, which would explain the unusual orbital configuration of a group of trans-Neptunian objects (TNOs)[3][4][5] whose orbits lie mostly beyond the Kuiper belt.[6] On 20 January 2016, researchers Konstantin Batygin and Michael E. How to Make Your Own Worm Farm - Vermiculture. Problem loading page. Object Graveyards: The Afterlife of Everyday Things. Energy Storage - The Next Big Thing. ‘From another planet’: Waves of strange ‘snowballs’ found in Maine lake (VIDEO)