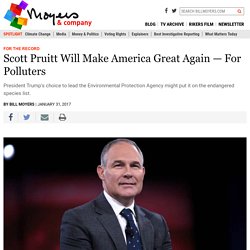 Oklahoma Attorney General Scott Pruitt has a track record of putting the business interests of the energy sector before the environmental and health interests of the public. He has spent his career fighting the rules and regulations of the agency he is now being nominated to lead. His expected confirmation threatens to make America great for polluters again. Update: Republican senators on the Environment and Public Works Committee suspended rules that required at least one Democratic senator be in attendance and voted 11-0 to approve Pruitt’s nomination on Thursday. Yesterday, Democrats on the committee walked out and sent a letter to the Oklahoma Attorney General’s office demanding more complete information about his potential conflicts of interest.

Minnesota appears on the cusp of new era of loon conservation. The moon over Lower Hay Lake set just before midnight, adding welcome darkness for a team of researchers on a mission to capture loons. 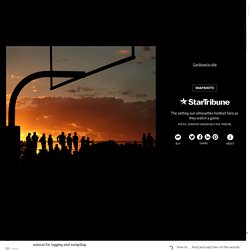 From the rear of their meandering skiff, a crew member sounded a device that mimicked a crying baby loon. The wail echoed into the night with no response. Up front, wildlife biologist Kevin Kenow raked a spotlight across the black water. Hours passed. If the strategy worked, an adult loon would answer the distress call and swim blindly into the beam. “Birds are tough tonight,” he whispered to everyone on board. Minnesota’s beloved loon population — the largest in the U.S. — is stable at about 12,000 breeding adults. Loons stopped reproducing on lakes when shoreline development exceeded 25 buildings per kilometer, or about six-tenths of a mile, a study in Wisconsin has found. The state’s share of the global settlement money is projected to be in the range of $5 million to $10 million, far less than originally thought, Henderson said. 140-foot dives.

Loons rescued from Lake Champlain. In late February, while venturing out on Lake Champlain, a fellow Nordic skater and I were troubled to find nine juvenile loons trapped in a small hole of open water between the Sandbar and Cedar Island. 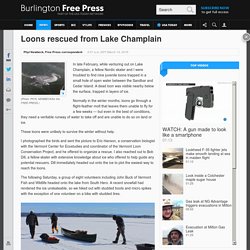 A dead loon was visible nearby below the surface, trapped in layers of ice. Normally in the winter months, loons go through a flight-feather molt that leaves them unable to fly for a few weeks — but even in the best of conditions, they need a veritable runway of water to take off and are unable to do so on land or ice. These loons were unlikely to survive the winter without help.

I photographed the birds and sent the picture to Eric Hanson, a conservation biologist with the Vermont Center for Ecostudies and coordinator of the Vermont Loon Conservation Project, and he offered to organize a rescue. I also reached out to Bob Dill, a fellow skater with extensive knowledge about ice who offered to help guide any potential rescuers. Where the Loons Call - Maine Loons - Down East Magazine. Three decades ago, Maine’s loon population was in free fall. 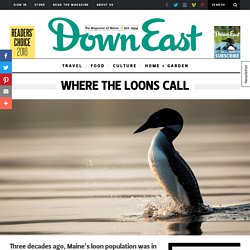 Now, the birds are doing so well that we’re about to start exporting them. Virginia M. Wright went peenting to learn more. Photographed by Paul Tessier If you’ve ever been on a lake in Maine, you know loons can be elusive. Just after sundown on a warm evening in mid-July, a small convoy of cars slides away from the stream of traffic on Route 302 in Windham and threads through a quiet residential neighborhood to the western shore of Little Sebago Lake.

Rest assured, we’re not looking for cruel entertainment. If you’ve ever been out on a lake in Maine, you know loons can be elusive. Evers is the boyishly handsome 50-something founder, executive director, and chief scientist of the Biodiversity Research Institute (BRI), a Portland-based organization that assesses threats to wildlife and ecosystems around the world — everything from evaluating DNA damage in Virginia’s brown bats to monitoring mercury levels in Russia’s seabirds. Minnesota loons closely watched as they head to Gulf of Mexico - StarTribune.com. Minnesota’s loons have begun to migrate south, and as they do scientists and citizens are tracking migration routes and wintering locations with pinpoint precision. 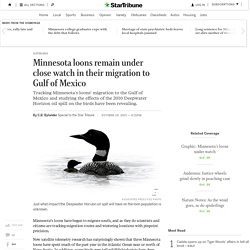 New satellite telemetry research has surprisingly shown that three Minnesota loons have spent much of the past year in the Atlantic Ocean near or north of Nova Scotia. In addition, some birds even tell wildlife biologists how deep and often they dive, which is up to 150 feet deep in the south end of Lake Michigan.

Deeper still — and worrisome — is what researchers are learning about the effects of the massive Deepwater Horizon oil spill in 2010 on some of the loons that spend winter in the Gulf of Mexico. Between April 22 and July 15, 2010, a U.S. government-estimated 4.9 million barrels of oil spewed from the ocean floor. Another 800,000 to a million gallons of toxic dispersant was used to manage the spill, in part, by sinking it. Minnesota loons closely watched as they head to Gulf of Mexico - StarTribune.com.