Here is the idea! 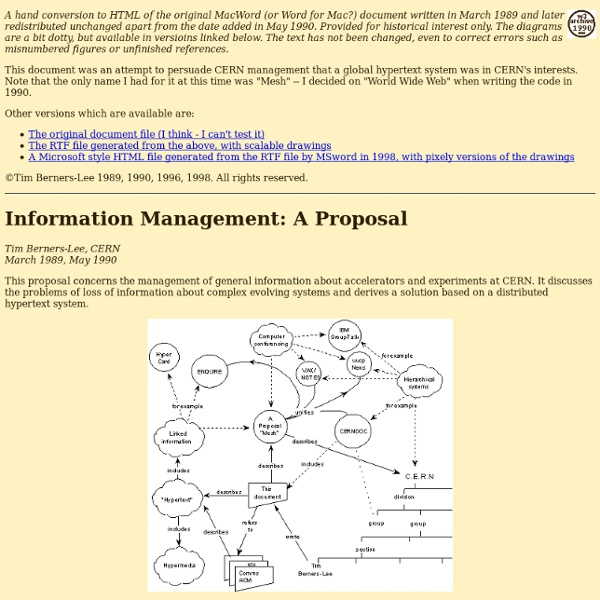 A hand conversion to HTML of the original MacWord (or Word for Mac?) document written in March 1989 and later redistributed unchanged apart from the date added in May 1990. Provided for historical interest only. The diagrams are a bit dotty, but available in versioins linked below. The text has not been changed, even to correct errors such as misnumbered figures or unfinished references. This document was an attempt to persuade CERN management that a global hypertext system was in CERN's interests. Other versions which are available are: ©Tim Berners-Lee 1989, 1990, 1996, 1998. This proposal concerns the management of general information about accelerators and experiments at CERN. Overview Many of the discussions of the future at CERN and the LHC era end with the question - ªYes, but how will we ever keep track of such a large project? Losing Information at CERN CERN is a wonderful organisation. A problem, however, is the high turnover of people. Where is this module used? Fig 1. Fig 2.

The project The WorldWideWeb (W3) is a wide-area hypermedia information retrieval initiative aiming to give universal access to a large universe of documents. Everything there is online about W3 is linked directly or indirectly to this document, including an executive summary of the project, Mailing lists , Policy , November's W3 news , Frequently Asked Questions . What's out there? Pointers to the world's online information, subjects , W3 servers, etc. The Semantic Web: An Introduction This document is designed as being a simple but comprehensive introductory publication for anybody trying to get into the Semantic Web: from beginners through to long time hackers. Recommended pre-reading: the Semantic Web in Breadth. Table Of Contents What Is The Semantic Web?

Media richness theory Background[edit] Media richness theory was introduced in 1984 by Richard L. Daft and Robert H. Lengel. Wikipedia by Wikipedia For Wikipedia's non-encyclopedic visitor introduction, see Wikipedia:About. Wikipedia ( i/ˌwɪkɨˈpiːdiə/ or i/ˌwɪkiˈpiːdiə/ WIK-i-PEE-dee-ə) is a free-access, free content Internet encyclopedia, supported and hosted by the non-profit Wikimedia Foundation. Those who can access the site can edit most of its articles.

The Pitfalls of Prediction Prognostication is a multi-billion dollar industry. We have weathermen, Wall Street Analysts, political pundits and futurologists. They all claim some expertise. These people exist because there is strong demand for their services. Businesses need to create budgets. People have to decide what to wear. Media Richness Theory Burke, K., Aytes, K., and Chidambaram L. “Media effects on the development of cohesion and process satisfaction in computer-supported workgroups: An analysis of results from two longitudinal studies,” Information Technology and People (14:2), 2001, pp. 122-142. D'Ambra, J. R., Ronald, E., and O'Connor, M. “Computer-mediated communication and media preference: an investigation of the dimensionality of perceived task equivocality and media richness,” Behaviour and Information Technology (17:3), May 1998, pp. 164-174. Dennis, A.

How two scientists are using the New York Times archives to predict the future ? Tech News and Analysis Researchers at Microsoft and the Technion-Israel Institute of Technology are creating software that analyzes 22 years of New York Times archives, Wikipedia and about 90 other web resources to predict future disease outbreaks, riots and deaths — and hopefully prevent them. The new research is the latest in a number of similar initiatives that seek to mine web data to predict all kinds of events. Recorded Future, for instance, analyzes news, blogs and social media to “help identify predictive signals” for a variety of industries, including financial services and defense. Researchers are also using Twitter and Google to track flu outbreaks. Eric Horvitz of Microsoft Research and Kira Radinsky of the Technion-Israel Institute describe their work in a newly released paper, “Mining the Web to Predict Future Events” (PDF).

The future is here – AlphaZero learns chess About three years ago, DeepMind, a company owned by Google that specializes in AI development, turned its attention to the ancient game of Go. Go had been the one game that had eluded all computer efforts to become world class, and even up until the announcement was deemed a goal that would not be attained for another decade! This was how large the difference was.

Education Theory/Epistemology and Learning Theories - UCD - CTAG Epistemology basic is a branch of philosophy that investigates the origin, nature, methods, and limits of human knowledge. Such beliefs influence the development of knowledge because they are considered to be the central values or theories that are functionally connected to most other beliefs and knowledge (Hofer & Pintrich, 1997). Our own personal epistemology influences our own theories of learning, and consequently, how we approach, design, and delivery our classes. The terms used to describe epistemological positions vary, depending on whether it’s describing the origin or the acquisition of knowledge. A brief overview of the key terms is presented in Figure 1. Figure 1. Introduction to Epistemology « Finding Knowledge This post discusses epistemology – first the sorts of questions we might ask when applying epistemology to education, and then a general taster of the areas epistemology covers (which is by no means comprehensive). If you want to comment, click on a paragraph and use the `comment` box to the right. Comments can also be viewed in this way. For a more detailed story re: relationship between epistemology, pedagogy and assessment (and learning analytics) see our paper (Knight, Buckingham Shum, Littleton, 2013), or my SoLAR talk and the citations within them. If you are here from the #lak13 mooc… I would definitely suggest reading the first section to get a flavour for the issues we`ll tackle.Some of you may also want to read the rest of the postFinally, if you`re still interested, there are a few further references on epistemology (generally), and the references from the whole post at the bottom – you could follow up with those.

When Google got flu wrong JOHN ANGELILLO/UPI/Newscom The latest US influenza season is more severe and has caused more deaths than usual. When influenza hit early and hard in the United States this year, it quietly claimed an unacknowledged victim: one of the cutting-edge techniques being used to monitor the outbreak. A comparison with traditional surveillance data showed that Google Flu Trends, which estimates prevalence from flu-related Internet searches, had drastically overestimated peak flu levels. The glitch is no more than a temporary setback for a promising strategy, experts say, and Google is sure to refine its algorithms. Epistemology, pedagogy, assessment and learning analytics Knight, Simon; Buckingham Shum, Simon and Littleton, Karen (2013). In: Third Conference on Learning Analytics and Knowledge (LAK 2013), 8-12 April 2013, Leuven, Belgium, pp. 75–84. Full text available as: There is a well-established literature examining the relationships between epistemology (the nature of knowledge), pedagogy (the nature of learning and teaching), and assessment. Learning Analytics (LA) is a new assessment technology and should engage with this literature since it has implications for when and why different LA tools might be deployed.

Happy everytime is see someone pearling this document. In every respect an amazing one. by Patrice May 31