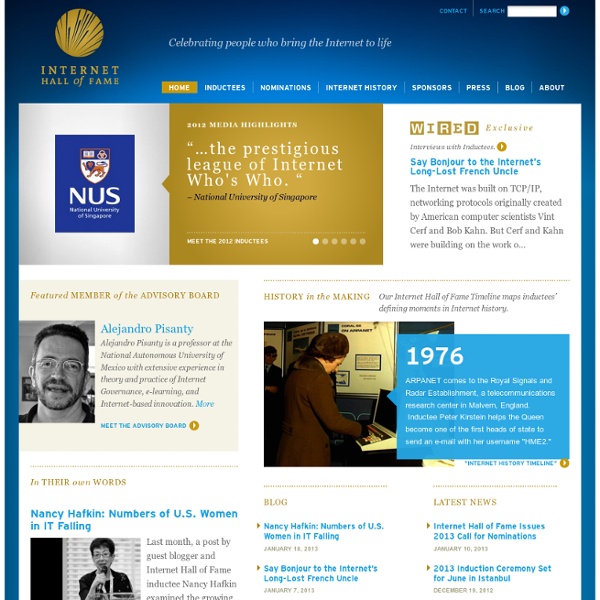 History | Internet Architecture Board A Brief History of the Internet Advisory / Activities / Architecture Board The origin of today’s IAB lies in the Internet Configuration Control Board (ICCB), which was created in 1979 by Vint Cerf, at that time program manager at DARPA, to advise him on technical issues. The ICCB was chaired by David Clark, MIT. In September 1984, after the ICCB meeting held at RSRE in Malvern, UK, the ICCB was disbanded and replaced by the Internet Advisory Board (IAB). In 1984, there were 10 Research Task Forces [Braden 1998]: In 1986 Dennis Perry, the program manager at DARPA, decided that DARPA should divide its efforts into the areas of Internet-related activities and distributed systems. In May 1986, the IAB become the Internet Activities Board (RFC 985). NSF also elected to support DARPA’s existing Internet organizational infrastructure, hierarchically arranged under the (then) Internet Activities Board (IAB). In January 1989, there were the following task forces: IAB Members IAB Chairs ISOC Liaison

Prelude to ARPANET In 1957, the Soviets launched the first artificial satellite Sputnik into orbit. This scared the United States to the core. President Eisenhower had a firm grasp of how advances in technology helped lead the allies to victory during World War II; he had a keen interest in not permitting the Soviets to gain the technological upper-hand during the Cold War. He immediately ordered the establishment of the Department of Defense Advanced Research Projects Agency (ARPA) with two broad missions: missile research (work taken over by NASA) and information technology (what would become the Internet). Science - The Endless Frontier A report to the President by Vannevar Bush, Director of the Office of Scientific Research and Development, July 1945. 1947 Cold War Begins National Science Foundation established. "One leading science spokesman was Vannevar Bush, a respected engineer and science administrator who headed the government's wartime Office of Scientific Research and Development. . . . L.

Where Did the Internet Really Come From? Steve Crocker is chairman of the Internet Corporation for Assigned Names and Numbers. In the late 1960s, he was a UCLA graduate student who helped create the ARPANET, a precursor to the Internet. During the early and mid 1960s – about a half a century ago – computers were physically very big. Only big companies, universities and governments had computers, storing them in special air-conditioned rooms. And they were expensive. On IBM’s flagship mainframe computer, the IBM 7094, the memory unit – what you would now call the RAM – held one megabit, i.e. about 128KB, and cost about one million dollars in the early 1960s. Here’s how the government changed all of that. Advertisement By the mid-1960s IPTO was funding a few dozen projects at UCLA, MIT, Harvard, Carnegie-Mellon, Stanford and similar universities and research laboratories. From their central vantage point in DARPA, key people could see the value of connecting these laboratories together.

The Greatest Internet Pioneers You Never Heard Of: The Story of Erwise and Four Finns Who Showed the Way to the Web Browser Juha-Pekka Tikka3/3/09 Three quiet and unknown Finnish engineers in their late thirties, Kim Nyberg, Kari Sydänmaanlakka, and Teemu Rantanen, have spent their working careers at the engineering software company Tekla in Finland. Their clients have used the software they created to model several well-known buildings, including Frank Gehry’s Walt Disney Concert Hall in Los Angeles, New York’s Hearst Tower, the famous ‘Bird’s Nest’ that is Beijing’s Olympic Stadium, and the world’s tallest building, Burj Dubai. But if matters had turned out a little differently, these men—and a former colleague named Kati Suominen (now Kati Borgers) who could not be present at the interview—might have become known as the Fathers and Mother of the World Wide Web browser. [Editor's note: This article is our first from Juha-Pekka Tikka, Xconomy's new Fellow from Stanford University's Innovation Journalism program. “Our 1991 X Window system browser, ‘Erwise,’ showed that a net browser was possible.

History of the Internet This timeline was researched by Kristina Redgrave, Diane Chang, Becky Kazansky, Andrew Seo and Micah Sifry, and edited by Micah Sifry. It is a work-in-progress. If you would like to suggest an important development that we may have missed, or make a correction to the record, please [use this form]( Facebook founded Facebook was founded originally as an intra-Harvard social networking site by Mark Zuckerberg and several of his classmates. Egyptian protesters launch #Jan25 revolution After the brutal police beating of 28 year-old businessman Khaled Said in Cairo, an anonymous Facebook user cerated the page "We are all Khaled Said" to express brewing dissatisfaction with police corruption and state repression at large. Introduction of electronic voting machines The direct recording electronic (DRE) voting machine is patented in 1974 and is first used in elections in 1975. "The Streisand Effect" is born 4Chan Launched The World Wide Web is Born

The Internet - The Launch of NSFNET While CSNET was growing in the early 1980s, NSF began funding improvements in the academic computing infrastructure. Providing access to computers with increasing speed became essential for certain kinds of research. NSF's supercomputing program, launched in 1984, was designed to make high performance computers accessible to researchers around the country. The first stage was to fund the purchase of supercomputer access at Purdue University, the University of Minnesota, Boeing Computer Services, AT&T Bell Laboratories, Colorado State University, and Digital Productions. In 1985, four new supercomputer centers were established with NSF support—the John von Neumann Center at Princeton University, the San Diego Supercomputer Center on the campus of the University of California at San Diego, the National Center for Supercomputing Applications at the University of Illinois, and the Cornell Theory Center, a production and experimental supercomputer center. support and information services.

Online public access catalog An online public access catalog (often abbreviated as OPAC or simply library catalog) is an online database of materials held by a library or group of libraries. Users search a library catalog principally to locate books and other material available at a library. History[edit] Early online catalogs[edit] Although a handful of experimental systems existed as early as the 1960s, the first large-scale online catalogs were developed at Ohio State University in 1975 and the Dallas Public Library in 1978.[1] These and other early online catalog systems tended to closely reflect the card catalogs that they were intended to replace.[2] Using a dedicated terminal or telnet client, users could search a handful of pre-coordinate indexes and browse the resulting display in much the same way they had previously navigated the card catalog. Throughout the 1980s, the number and sophistication of online catalogs grew. Stagnation and dissatisfaction[edit] Next-generation catalogs[edit] Union catalogs[edit]

Dynix (software) The Dynix Automated Library System was a popular integrated library system, with a heydey from the mid-1980s to the late-1990s. It was used by libraries to replace the paper-based card catalog, and track lending of materials from the library to patrons.[2] First developed in 1983, it eventually became the most popular library automation software ever released, and was once near-ubiquitous in libraries boasting an electronic card catalog, peaking at over 5,000 installations worldwide in the late 1990s, with a market share of nearly 80%,[3] including the United States' Library of Congress. Typical of 1980s software technology, Dynix had a character-based user interface, involving no graphics except ASCII art/ANSI art boxes. The first installation, in 1983, was at a public library in South Carolina. The library actually contracted for the system before the software was written. Dynix use grew quickly in the early-and-mid 1990s.

The origins of the Internet in Europe - Google Cultural Institute Brussels, Belgium, Europe, 1895: two men shared a dream of « indexing and classifying the world’s information ». Paul Otlet and Henri La Fontaine’s work foreshadowed the network of knowledge that a century later became the Internet with its search engines! Otlet and La Fontaine aimed to preserve peace by assembling knowledge and making it accessible to the entire world. They built an international documentation center called Mundaneum. By 1935, their Mundaneum grew to a staggering 16 million cards covering subjects ranging from the history of hunting dogs to finance! World War II and the death of both founders slowed down the project.

Marc Andreesen Beginnings at the University of Illinois Marc Andreesen was a student and part-time assistant at the National Center for Supercomputing Applications (NCSA) at the University of Illinois when the World Wide Web began to take off. His position at NCSA allowed him to become very familiar with the Internet. Like just about everyone else who was involved with the Internet, he also became familiar with the Web. By December 1993, Mosaic's growth was so great that it made the front page of the New York Times business section. "That was the way to get the company jump-started, because that just gives you essentially a broad platform to build off of. They decided to adopt a "free but not free" price structure for the browser.

Paul Mockapetris Dr. Paul V. Mockapetris proposed a Domain Name System (DNS) architecture in 1983 in RFCs 882 and 883 while at the Information Sciences Institute (ISI) of the University of Southern California. He had recognised the problem in the early Internet (then ARPAnet) of holding name to address translations in a single table on a single host, and instead proposed a distributed and dynamic DNS database: essentially DNS as we have it today. Mockapetris received two bachelor's degrees (in Physics and in Electrical Engineering) from the Massachusetts Institute of Technology (MIT) in 1971, and his PhD in Information and Computer Science from the University of California, Irvine in 1982. In 1978, Mockapetris joined ISI, where he later created the first SMTP email server. After writing RFCs 882 and 883, he wrote the first DNS implementation (called "Jeeves") for the TOPS-20 operating system in 1983. Mockapetris received the 1997 John C. References "ISI Names Dr. External links Page about Dr.

Diffie-Hellman key exchange TCP/IP Security TCP/IP Security CHRIS CHAMBERS, JUSTIN DOLSKE, and JAYARAMAN IYER Department of Computer and Information Science, Ohio State University, Columbus, Ohio 43210 The TCP/IP protocols, the basis for today's Internet, lack even the most basic mechanisms for security, such as authentication or encryption. Introduction In the early 1980's, specifications were finished for the TCP and IP protocols. 1. TCP/IP is the backbone of the internet today. 1.1. The Internet Protocol (or IP as it generally known), is the network layer of the Internet. Figure 1. The IP Header is shown in Figure 1. 1.2. Transmission Control Protocol (TCP) runs on top of IP, and provides a connection oriented service between the sender and the receiver. A TCP connection is identified by the 4-tuple ((destination-ip-address, destination-port), (source-ip-address, source-port)). In order to understand the security problems associated with TCP, it is necessary that we look at the state-machine in detail. 1.3. 1.4.TCP Header 1.5. 2.