Feed Validator for Atom and RSS 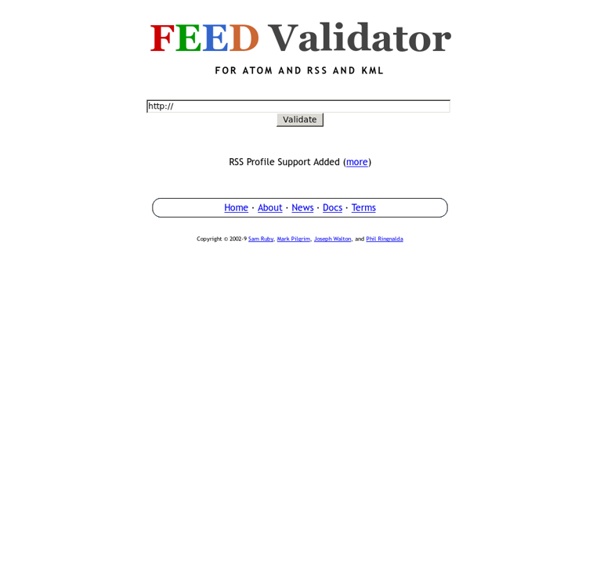 Micro Persuasion: 35 Ways You Can Use RSS Today The Clip Report: An eBook on the Future of Media In the early 1990s when I began my career in PR there were clip reports. These were physical books that contained press clips. It seems downright archaic now but that’s how I learned about the press - by cutting, pasting up and photocopying clippings. My fascination with the media never abated.

RSS 2.0 Specification (RSS 2.0 at Harvard Law) Internet technology hosted by Berkman Center Tuesday, July 15, 2003 Contents What is RSS? Badger: Badge Any RSS Feed With Yahoo! Pipes The Badger uses Yahoo! Pipes and JavaScript to create Web badges out of any RSS feed. Edit colors, change feeds, pages, and headlines, and pick up your source code at the bottom of the page. Boing Boing, TechCrunch, Slashdot, Digg News, and ProgrammableWeb all have examples ready to look at ... if you're looking for interesting feeds, check out Technorati Search or FeedFlinger. If The Progress Indicator is Spinning Forever And Not Loading.... The default Badger pipe is probably getting rate-limited.

Research Tools Skip to main content Create interactive lessons using any digital content including wikis with our free sister product TES Teach. Get it on the web or iPad! guest Join | Help | Sign In Tracking Packages with RSS March 16, 2005 With the increasing popularity of RSS and Atom, syndication is beginning to be used for many more innovative purposes than simply distributing website updates. In this article I want to show how to simplify such mundane tasks as tracking packages by converting tracking data into an RSS 2.0 feed. Why RSS? The first obvious question that comes to mind is why bother with RSS? After all, major U.S. package carriers, including the old-fashioned United States Postal Service, already provide free tracking systems on their websites.

Web / Authoring / Languages / XML / RSS - WebReference.com RSS Links and Resources Defined in XML, the Rich Site Summary (RSS) format (aka "Really Simple Syndication"), previously known as the RDF Site Summary, has quietly become a dominant format for distributing news headlines on the Web. WebRef maintains its own RSS feeds, including our our front page, and JavaScript Tip of the Day. Here are some top resources for more info on RSS.