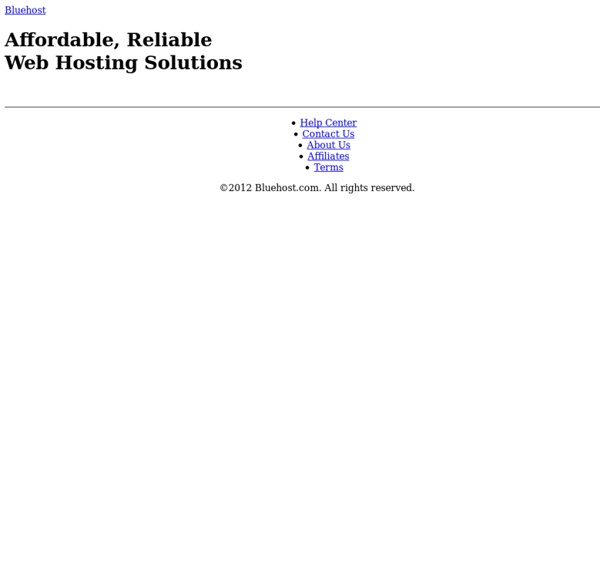 Ink: A Responsive Email Framework from ZURB We know building HTML emails is hard, especially responsive emails. That's why we created Foundation for Emails. Get away from complex table markup and inconsistent results. Remember Everything with Evernote: 30+ of the Best Tips and Tricks You just had a brilliant idea, discovered a great article, or have been put in charge of your team's meeting notes. You need a place to save it all. Evernote might be the perfect app for the job. With more than 150 million users, Evernote is one of the most popular note-taking apps because it lets you keep track of just about any kind of information you want to remember later. It's actually much more than just a note-taking app, too. In this guide, you'll learn about Evernote's best features, shortcuts that will help you save time, and tips to better organize your notes and make the most of this powerful productivity tool.

Website speed test Nobody Likes a Slow Website We built this Website Speed Test to help you analyze the load speed of your websites and learn how to make them faster. It lets you identify what about a web page is fast, slow, too big, what best practices you’re not following, and so on. We have tried to make it useful both to experts and novices alike. How to Build a Responsive WordPress Theme with Bootstrap In this tutorial, we will learn how to make our own responsive WordPress theme using Bootstrap. Bootstrap is a responsive framework for building web sites and applications, and it’s a great starting point for building a responsive WordPress theme. Check out Zac’s other WordPress courses and enjoy a free, two-week trial of Treehouse. You don’t have to have built a theme from scratch before to successfully follow along. However, we do assume that you are comfortable doing things like adding and editing posts in the admin area or installing plugins.

The 100 Best Android Apps of 2017 The Google Play app store is a little bit like a galaxy of software. From a distance, the sheer number of apps is staggering, and it's hard to take them all in at once. But zoom in on any one of those apps, and the distance between them, in terms of features and quality, is vast. 50+ incredible freebies for web designers, May 2015 We’re constantly amazed at the generosity of designers and developers who release exciting, inspiring products out to the web design community on a daily basis. Not only do these impressive designers speed up our work with more free resources than we can use, but they drive us on to more and more ambitious work of our own. Every month we collect together the best free resources for web designers and developers, and this month there truly is something for everyone; we’ve got great icons, UI kits, and mockups; as well as scripts, tools, and extensions. So free up some hard drive space, then browse through these downloads, enjoy!

Calendrier en JS How does it work? CLNDR takes your template and injects some data into it. The data contains everything you need to create a calendar. Here's what you get: Most notable is the days array, which contains an entire grid. 50 CSS and JavaScript Tools, Frameworks and Libraries Keeping up with the new releases in web design is not easy. There are new tools, libraries and frameworks seemingly released every other day. The good news is we’re here to summarize everything up for you. In total, we have trimmed this CSS and JavaScript resource collection down to our 50 favorites, just to make things easier for you. All of the tools, libraries and frameworks have been categorized into the following categories: CSS Libraries & Toolkits, Flexbox Tools, Responsive Web Frameworks, Material Design Frameworks, Random CSS Stuff, JavaScript Libraries & Frameworks and finally a bunch of Web-Based Apps. CSS Libraries & Toolkits

CSS Get the lowdown on the key pieces of Bootstrap's infrastructure, including our approach to better, faster, stronger web development. HTML5 doctype Bootstrap makes use of certain HTML elements and CSS properties that require the use of the HTML5 doctype.