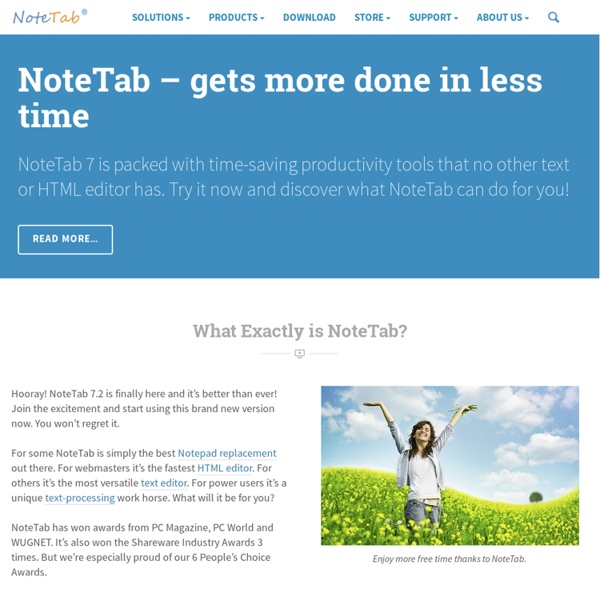 MyFav.es: Create Minimalist Start Page With Favorite Website Ico Bowser startpage users who like to keep it simple will instantly fall in love with MyFav.es. MyFav.es (derived from “my favorites”) is a minimalist start page website that delivers great functionality in its simple design. If you do not know what a startpage is, it is a collection of web shortcuts shown in a thumbnail view. When it comes to startpage websites, many of them give you unlimited shortcuts options; this causes a clutter which is counterproductive ““ it makes it harder to reach your desired web shortcut. Features: Check out MyFav.es @ www.myfav.es

Sort My List - Alphabetize, Remove Line Breaks, Add Labels, Prune Text Using Dean Edwards IE7 Script The issue When Internet Explorer version 6 (IE6) was introduced in 2001 it was a groundbreaking product but browsers were then being developed so fast that it was soon overtaken by others which conformed better with web standards. IE6 quickly became the butt of authors' humour but, in spite of this, ten years later it is still widel y deployed and, although numbers are reducing, its final demise may well be some way off. Consequentially authors still need to design sites that will give visitors using IE6 an acceptable experience. IE7 script In the recent past authors have usually worked around the problem by writing a specific style sheet and targeting it at this browser [Ref 10] – a process that has often been very time-consuming. You seem to have scripts switched off. Dean Edwards' objective is to make IE6 behave like IE7. IE7 is a JavaScript library to make Microsoft Internet Explorer behave like a standards-compliant browser. The library has been made freely available for use. or

HippoEDIT - Windows text editor for programmers IE5/6 Doubled Float-Margin Bug - CSS fixes and workarounds What Goes Wrong With Float Margins in IE6 A coder innocently places a left float into a container box, and uses a left margin on the float to push it away from the left side of the container. Seems pretty simple, right? Well it is until it's viewed in IE6. In that browser the left float margin has mysteriously been doubled in length! Thankfully, IE7 does not show this bug. The Way It Oughta Be The graphic below shows a simple div (tan box) containing a left-floated div (green box) . The Old IE "Doubletake" That exact same code when viewed in IE/Win is displayed in a slightly different way. Why is this happening? Important Points This bug only occurs when the float margin goes in the same direction as the float and is trapped directly between the float and the inside edge of the container box. At Last, A Fix! Steve Clason has discovered a fix, outlined in his Guest Demo, that fixes both this doubled margin bug and a weird text indent bug as well. So What Is It Already? Serendipity Well!

EditPlus - Text Editor, HTML Editor, PHP Editor and Java Editor for Windows The R programming language for programmers coming from other programming languages IntroductionAssignment and underscoreVariable name gotchasVectorsSequencesTypesBoolean operatorsListsMatricesMissing values and NaNsCommentsFunctionsScopeMisc.Other resources Ukrainian translation Other languages: Powered by Translate Introduction I have written software professionally in perhaps a dozen programming languages, and the hardest language for me to learn has been R. R is more than a programming language. This document is a work in progress. Assignment and underscore The assignment operator in R is <- as in e <- m*c^2. It is also possible, though uncommon, to reverse the arrow and put the receiving variable on the right, as in m*c^2 -> e. It is sometimes possible to use = for assignment, though I don't understand when this is and is not allowed. However, when supplying default function arguments or calling functions with named arguments, you must use the = operator and cannot use the arrow. At some time in the past R, or its ancestor S, used underscore as assignment. Vectors Sequences

Text To Speech – Listen to your text, just copy paste with more than 20 accents