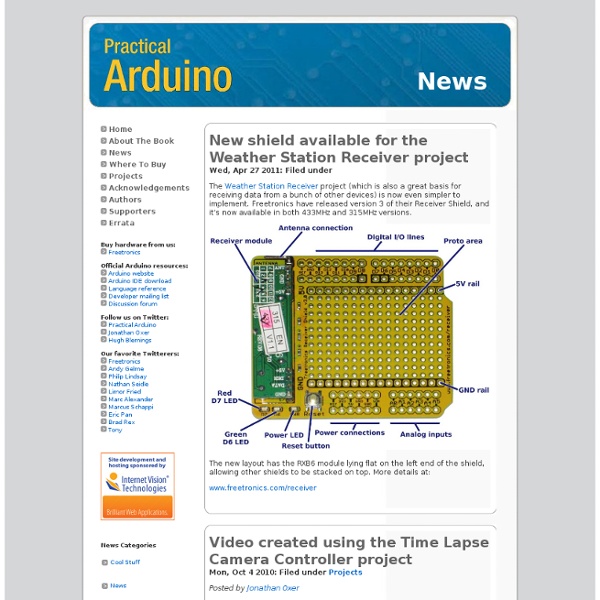 Fri, Apr 9 2010: Filed under Projects Posted by Jonathan Oxer When whittling down the list of projects for Practical Arduino I never expected the Weather Station Receiver project to be one that gained so much attention. To be honest I was dubious about whether enough people would build it to justify its inclusion, but felt that even if it wasn't built very often it was still worthwhile as an example of how to do signal timing analysis and bitstream decoding. I'm glad we put it in, because it seems to be one of the more popular projects! Reader Kelsey Jordahl contacted me yesterday with details of a modified version that reads data from a La Crosse TX4U system, using the circuit from Practical Arduino but with modified software to deal with the different data format.

Arduino « The Rantings of a Techno-Mage I bought an Arduino some time ago, but now I just received an ATMega168 from Daniel Jouiffe in Canada. He’s doing a trust scheme where he burns the boot loader onto an ATMega168, and then posts that and a 16MHz crystal to you, where ever you are. Then you pay him back however much you want. I just put into my Arduino NG board, and it works really nice. I’ve just doubled most specifications of my ATMega8. Build Your First Robot (as seen in Popular Mechanics Magazine) Parts list, FAQ, Templates, and Extra Goodies Welcome to the Build Your First Robot (BYFR) information page! The Build Your First Robot project, or ArdBot II, appears in the February 2012 issue of Popular Mechanics, and an updated version starting with the August 2013 issue of SERO Magazine! BYFR Information Central Parts List and Sources - Where to get parts for your BYFR/ArdBot II.

Secret-Knock Gumball Machine One of the best things about exhibiting at Maker Faire is giving attendees a challenge. For the 2010 Maker Faire Bay Area, I decided to combine a past project of mine, a door lock that opens only when you give a secret knock, with a standard crowd pleaser: candy. The result was this Secret-Knock Gumball Machine, which tempted and tested the crowds at Maker Faire to guess the right rhythm and receive a treat. Since the knock was not terribly secret (I happily handed out hints), it distributed hundreds of gumballs over the event’s two days. The “secret” knock defaults to the famous “Shave and a Haircut” rhythm, but you can program custom knocks by simply pressing a button and knocking a new pattern. The machine only listens for the rhythm, not the tempo, so the correct knock will dispense a treat whether you perform it fast or slow.

arduino meets processing - PUSHBUTTON The Arduino meets Processing project intends to make it as easy as possible for anyone to explore the world of physical computing. All you need is an Arduino board as well as the Arduino and Processing software, which you can download on their project websites. On this website we explain how to: Arduino Based Reflow Oven Controller – Testing & Progress No, this post is not about Megatron looking for energon cubes. We just love labeling all our tools and machines with characters from the show we heart when we were young. Alright, finally there’s some progress on the reflow oven controller. I know many of you guys are asking when they’ll be available, I hope the waiting is going to be over pretty soon! While working on the reflow oven controller firmware, we came across some sample codes from Adafruit (Thanks LadyAda!) posted on GitHub (GitHub rocks!).

Speech Synthesizer Synthesized speech was for a long time the Holy Grail of computing, and back in the 1980s when a 4MHz CPU made your computer the fastest machine in the neighborhood it just wasn't practical for software to create intelligible speech. In those days the only sensible way to generate speech was to offload the task to dedicated hardware because the CPU simply couldn't keep up. The most widely used speech chip through the 80s and early 90s was the famous SPO256A-AL2, the allophone speech processor. It was used in toys, in external speech synthesizer peripherals for desktop computers, in industrial control systems, and all sorts of other unexpected places. Then as CPU power continued to increase rapidly speech synthesis was moved to being a software function, and nowadays of course it is almost always done entirely in software by the main CPU using only a tiny fraction of the available processing power. Parts Required

Charlieplexing LEDs with an AVR ATmega328 (or Arduino) Charlieplexing is an ingenius method for controlling many LEDs without using many microcontroller pins. You can turn on or off one LED at a time. To light more than one LED at a time, you can scan the LEDs by turning a sequence of them on and off really fast. The number of LEDs you can control is determined by this formula: N pins * (N pins – 1). Arduino Arduino is an open-source computer hardware and software company, project and user community that designs and manufactures kits for building digital devices and interactive objects that can sense and control the physical world.[1] Arduino boards may be purchased preassembled, or as do-it-yourself kits; at the same time, the hardware design information is available for those who would like to assemble an Arduino from scratch. The first Arduino was introduced in 2005. The project leaders sought to provide an inexpensive and easy way for hobbyists, students, and professionals to create devices that interact with their environment using sensors and actuators. Common examples for beginner hobbyists include simple robots, thermostats and motion detectors. Adafruit Industries estimated in mid-2011 that over 300,000 official Arduinos had been commercially produced,[3] and in 2013 that 700,000 official boards were in users' hands.[4]

Arduino Robot 2 - Wandering Tank What a busy couple of weeks I have had. Many upgrades for the printer have arrived, and work continues on understanding and possibly building Hexy before my Kickstarter version arrives from Arcbotics. In this post I will cover the upgrades I have made to the printer; why I made the upgrades, their cost; and finally show some updated Hexy prints to show off the new accuracy. First; I was printing the Seej Starter Set, in preparation for taking my printer to work on my last day. While doing so, the printer gave up the ghost. Badly.

RGB Liquid Crystal Display Tutorial Step #2: PrevNext Now we will prepare everything to start connecting to the Arduino. Insert the display into the breadboard with the pot next to it. Then connect 5V and GND to the breadboard rails as I have done. Top 10 DIY Arduino Projects and HOW-TO Tutorials! Arduino has been widely popular among hackers and DIY-addicts out there for modding/hacking things. For those of you just entering the Arduino world, here’s a bunch of great Arduino tutorials/projects that can help you jump-start your next project. 1) Did you know that you can program/flash your Arduino wirelessly? For those of you who are going to be making devices where the Arduino is hidden from easy access, read up on how you can program your Arduino wirelessly using Xigbee modules over at Lady Ada’s site. 2) Arduinome is a project the Monome for audio sequencers.