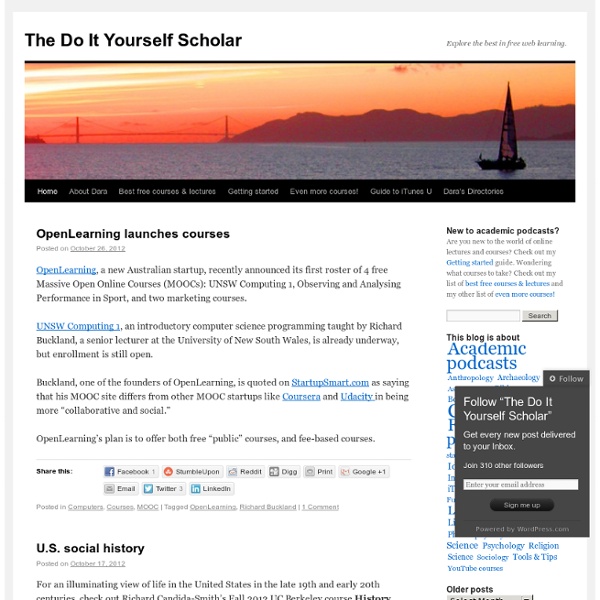 Massachusetts Institute of Technology has been in the free online course business longer than just about everyone else. Its website is chock full of exciting riches, but navigating the site can be a challenge. While MIT groups the courses by subject area, it can be difficult to discern which courses offer more than bare-bones reading lists. So, here is a guide to finding the good stuff. It helps to think of MIT courses as coming in four main varieties, corresponding to different kinds of banana splits. The most basic variety (think naked banana) is a course outline, with a syllabus, a list of readings and maybe some lecture notes.

Building a Celtic Roundhouse The walls of roundhouses were either dry stone filled in with clay and straw, or a ring of support poles weaved with wattling and plastered in daub, or a mixture of both stone and wattling as being built here (left). Wattle and daub is one of the oldest building techniques dating back to the Bronze Age and beyond. Wattling is a way to build walls by weaving long flexible sticks in and out of upright posts. Hazel, which is pliable and grows naturally long, is a good species to use for wattle. It is also the preferred wood used by straw bale builders to pin bales together.

Online Computer Science Courses In its purest form, computer science is the research and development of technology that solves specific problems. Computer science has brought the world smart phones, GPS systems, the gaming industry and tablet computing, along with technological developments that assist government, industry and medicine. In addition to creating new technology, computer scientists also make improvements to existing technology and study the ways computers can make our lives easier.

Free Lectures Online Whether your goal is to earn a promotion, graduate at the top of your class, or just accelerate your life, lectures can help get you there. Our archives of lectures cover a huge range of topics and have all been handpicked and carefully designed by experienced instructors throughout the world who are dedicated to helping you take the next step toward meeting your career goals. Lifelong learns can turn their free time turn into self-improvement time. The online lectures on this list are more than lecture notes or a slideshow on a topic -- they were designed for audiences like you, with carefully sequenced themes and topics taught by veteran educators, and often with additional resources for your own independent study. The lectures are available to anybody, completely free of charge. Lecture courses are a valid and vital learning tool, and may be one of the best methods of learning available.

Plans ZeroPC offers FREE, Basic and Pro premium accounts. Basic and Pro premium accounts offer users who require additional storage and expanded feature. Below please find the Pricing & Comparison for each account type. How Whole Turmeric Heals The Damaged Brain Long considered impossible to accomplish, new research reveals how a simple spice might contribute to the regeneration of the damaged brain. Turmeric is hands down one of the, if not the, most versatile healing spice in the world with over 600 experimentally confirmed health benefits, and an ancient history filled with deep reverence for its seemingly compassionate power to alleviate human suffering. But, most of the focus over the past decade has been centered on only one of its many hundreds of phytocompounds: namely, the primary polyphenol in turmeric known as curcumin which gives the spice its richly golden hue.

Sugar Harms Your Brain Health, Drives Alzheimer’s Epidemic By Dr. Joseph Mercola Guest Writer for Wake Up World Exploring the Superconscious Interview with Dr Edward Bynum, author of Dark Light Consciousness Author: Jair Robles We are all familiar with its symbolic representations, be it from the caduceus used by modern medicine, the winged serpent of Prehispanic Mesoamerican cultures or the dragons commonly seen at most Asian celebrations. In the Shadow of Hegel: How Does Thought Arise Out of Matter? What's the Big Idea? Before neuroscience and quantum physics, there was Georg Wilhelm Friedrich Hegel. The 19th century German idealist revolutionized Western thought, and every great thinker since has been working in his shadow, says Slavoj Žižek, the Slovenian philosopher and cultural critic.

untitled Introduction Robert Monroe developed and patented a binaural-beat technology called the Hemi-Sync auditory-guidance system. The Monroe Institute, a 501c(3) nonprofit research and educational organization, uses this Hemi-Sync system within an educational process. During this process individuals listen to a combination of multiplexed audio binaural beats that are mixed with music, pink sound, and/or the natural sound of surf. Rosenhan experiment Experiment to determine the validity of psychiatric diagnosis Rosenhan's study was done in eight parts. The first part involved the use of healthy associates or "pseudopatients" (three women and five men, including Rosenhan himself) who briefly feigned auditory hallucinations in an attempt to gain admission to 12 psychiatric hospitals in five states in the United States. All were admitted and diagnosed with psychiatric disorders.