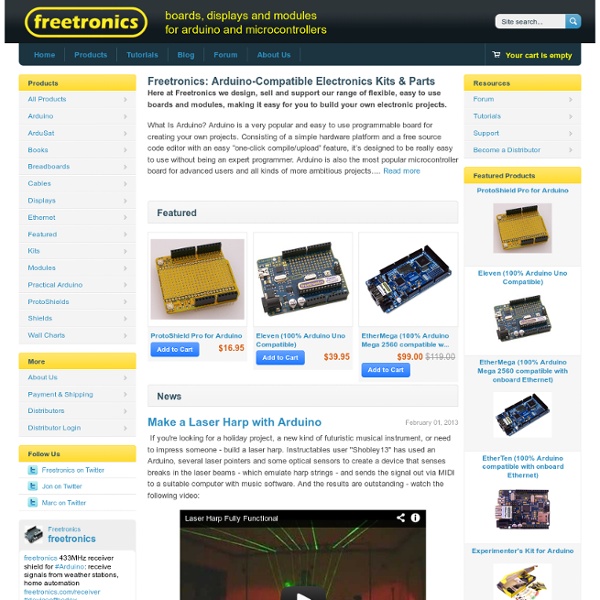 Raspberry Pi Microcomputer Gets Beefed Up — Still Only Costs $35 The Raspberry Pi microcomputer has been a stunning success. More than 2.5 million of the low-cost Linux microcomputers have been sold in the two+ years since the gizmo went on sale, helping to power all manner of homebrew projects. The sales figure is especially impressive when you consider that the not-for-profit UK organization behind the device initially reckoned it would sell maybe a few thousand units over its lifetime. Given the large community that’s built up around the Pi, there have inevitably been calls for tweaks to the design to incorporate improvements that make the board more flexible and capable. In a video introducing the new model B+, the Pi Foundation’s Eben Upton stresses that the B+ is not the next generation of Pi — but rather the final upgrade of the original design. The model B+ Pi is on sale now, via the Foundation’s usual distributors (in the UK that’s element 14 and RS Components).

Secret-Knock Gumball Machine One of the best things about exhibiting at Maker Faire is giving attendees a challenge. For the 2010 Maker Faire Bay Area, I decided to combine a past project of mine, a door lock that opens only when you give a secret knock, with a standard crowd pleaser: candy. The result was this Secret-Knock Gumball Machine, which tempted and tested the crowds at Maker Faire to guess the right rhythm and receive a treat. Since the knock was not terribly secret (I happily handed out hints), it distributed hundreds of gumballs over the event’s two days. The “secret” knock defaults to the famous “Shave and a Haircut” rhythm, but you can program custom knocks by simply pressing a button and knocking a new pattern. Inside the machine, a piezo sensor picks up sounds from the front knock panel, while an Arduino microcontroller recognizes the target pattern and controls a servo-driven gumball-dispensing wheel. Downloadable files MAKE: Amends

Yet another laser cutter When my EPSON 830U decided not to work for me anymore (printing heads clogged) I thought I could make some use of the still working mechanics of the printer. It's based on a couple of stepper motors for both axis of motion (print head and paper feed). So I replaced the original power supply and drive electronics for an arduino board and an stepper motor driver from Adafruit industries. Now I could move the printhead anywhere on a page. Next step was to add a laser on the printhead and to control it using a PWM output from arduino (so laser power could be modulated from the computer). Though it only cut thin back color cardboard, it has may uses. Data format is very simple: each line contains a sequence of integer numbers separated by blank space. If you have an old EPSON printer, you may want to give it a second thought before putting it to the trash. Video was shot by taping an iPod to the printer's head.

Setting up LIRC on the RaspberryPi - alexba.in June 8th 2013 Update: I have completed a soldered circuit prototype, complete with a full parts list and high resolution build pictures. Please read Open Source Universal Remote - Parts & Picturse to learn more. March 9th 2013 Update: I have formalized the schematic and parts list that I’m using and have made it available on Upverter. Please read RaspberryPi IR Schematic for LIRC for more details. March 4th Update: I’ve written a follow up post that describes how to control your RaspberryPi universal remote from the web. Preface In July 2012 I wrote a post called Universal remote experiments about creating a web controlled universal remote from the electronics up. At the end of that post I had decided to rebuild the project on a RaspberryPi. This post will serve as ‘part two’ of that project and cover how to install and configure LIRC on a RaspberryPi. LIRC - Linux Infrared Remote Control Setting up LIRC on the RaspberryPi sudo apt-get install lirc Add this to your /etc/modules file: Success!

Charlieplexing LEDs with an AVR ATmega328 (or Arduino) Charlieplexing is an ingenius method for controlling many LEDs without using many microcontroller pins. You can turn on or off one LED at a time. To light more than one LED at a time, you can scan the LEDs by turning a sequence of them on and off really fast. Here is an ATmega328 on a custom PCB controlling 20 LEDs (the 21st is on its own pins) with just 5 pins: Charlieplexing takes advantage of the fact that LEDs are diodes: Current flows in only one direction through an LED. The ATmega328 pins can source upwards of 40 mA. In this project, we’ll set up a simple Charlieplexing circuit with 12 LEDs controlled by an Arduino that will look like this: I’ll walk you through connecting 12 LEDs to four pins on your Arduino. I wrote the Arduino code to make it easy to add or remove LEDs. On a side note to the above side note… Here is a gist showing code that directly manipulates the DDRx and PORTx registers to save on cycles when switching between LEDs:

Arduino, Arduino Shields, Arduino Sensors, and Arduino Kits KeypadTutorial Matrix Keypad library This page last updated September 04, 2013, at 11:42 AM by gratefulfrog This tutorial is based upon theMatrix Keypad library Navigation What is it? The Keypad library allows your Arduino to read a matrix type keypad. Download latest(This includes four example sketches.) Identifying the keypad pins First you need to get a piece of paper and draw the right hand diagram as you see it below. Procedure Connect your Ohm meter leads to pins 1 and 2. Notes on using the library The library is non-blocking which means you can press and hold the key all day long and your Arduino will continue processing the rest of your code. Example Troubleshooting 1. 2. 3. Modifying the library The library supports user defined pins and keymaps so it should not be necessary to change the library. More information on using and creating libraries

New release: HVAC IR Remote Module for Arduino / Raspberry Pi IR Remote is a small shield that allows you to record any infrared command sent by a remote control and resend it from the Internet. It works connected to Arduino and Raspberry Pi, and let us to control any HVAC system including heating,ventilation, air-conditioning and thermostats from the Cloud. We offer 6 different wireless interfaces to connect Arduino and Raspberry Pi to the Internet: WiFi, 3G, GPRS, Bluetooth and 802.15.4 / ZigBee. With IR Remote you can easily control our home HVAC system from a laptop, a webserver or even from your smartphone. The shield is compatible with both Arduino and Raspberry Pi so you can choose your favourite platform to automate your home. You can find a detailed Tutorial to know how to use IR Remote Module with your favourite HVAC devices, as well as a demonstration video to show a basic example of what it can do.

RGB Liquid Crystal Display Tutorial Step #2: PrevNext Now we will prepare everything to start connecting to the Arduino. Insert the display into the breadboard with the pot next to it. Step #5: Connect pin 15 to 5V and then connect either pin 16, 17, or 18 to GND depending on what color you want for your backlight. Step #8: Now you have connected the display to the Arduino. Step #9: If you got everything right, this is how it should look.