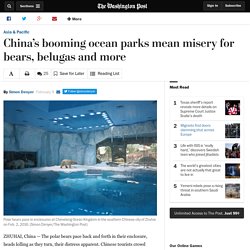 (Simon Denyer/The Washington Post) ZHUHAI, China — The polar bears pace back and forth in their enclosure, heads lolling as they turn, their distress apparent. Chinese tourists crowd around display windows to snap quick close-ups on their phones. Beluga whales nod in time to loud music, “kiss” children or spit plumes of water toward gasping crowds. A walrus blows a trumpet, seals catch Frisbees and dolphins propel their trainers through the water on their beaks. Chimelong Ocean Kingdom here is the largest of China’s 39 ocean theme parks, the flagship of a booming industry that is capturing some of the world’s most magnificent and intelligent animals from the wild and keeping many of them in cramped, inadequate conditions. 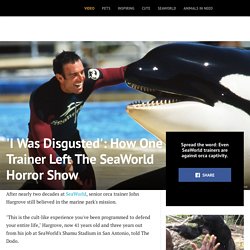 合肥海洋世界海豚馆元旦开放 拟开海豚辅助治疗自闭症项目__万家热线-安徽门户网站. Cruel Dolphinarium Proposed in Poland – Here’s How You Can Stop It! Up till now, there has never been a dolphinarium in Poland. 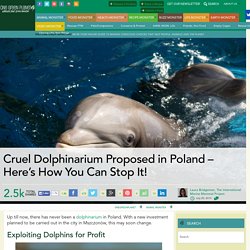 With a new investment planned to be carried out in the city in Mszczonów, this may soon change. The Dolphin Trainer Who Loved Dolphins Too Much. Ashley Guidry with Sandy, a wild-caught bottlenose dolphin, at Gulf World. 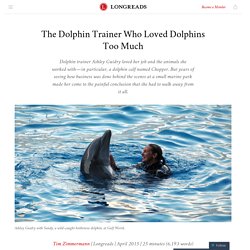 Tim Zimmermann | Longreads | April 2015 | 25 minutes (6,193 words) Panama City Beach, Florida is set on the alluring waters of the Gulf Of Mexico, in northwestern Florida. It’s a town of cookie-cutter condos and sprawling outlet malls, built almost entirely on the idea that blazing sun, a cool sea, white sand beaches, and copious amounts of booze are an irresistible formula for human happiness (or at least a pretty damn good time). Everything about the place—from the ubiquitous fast food, to the endless chain stores, to the Brobdingnagian miniature golf courses—is designed to anticipate and then slake the vast and relentless array of human desires. Prime among the entertainment offerings is Gulf World Marine Park. Marc Bekoff - Here's Proof Orcas Die Young In Captivity. A new study shows captive killer whales don't live as long as wild relatives. 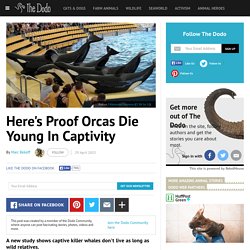 The award-winning documentary "Blackfish" clearly showed that captive killer whales (orcas) live horrific lives. They are routinely mistreated, forced to breed, and forced to perform stupid and unnatural tricks all in the name of money (see for example, "Why SeaWorld Can't Float: Censorship and Business Ethics" and references therein). Often those who profit from keeping orcas and other cetaceans locked up in water zoos claim that the animals have a better life than they would in the wild because they're fed, housed, given veterinary care, and loved by trainers and others who control their lives. 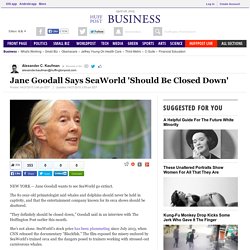 The 81-year-old primatologist said whales and dolphins should never be held in captivity, and that the entertainment company known for its orca shows should be shuttered. Take Action: Support Us on the Frontlines in Japan. We support the new lawsuit sponsored by Earth Island Institute’s International Marine Mammal Project and call on SeaWorld's new CEO Joel Manby to cease and desist from their false and deceptive information dissemination about orcas aimed at misleading members of the public to buy tickets. 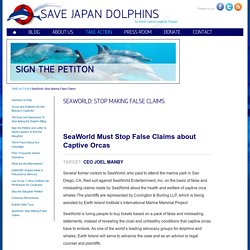 SeaWorld is failing to tell the truth about - the cruel conditions of small sterile pools for large and intelligent orcas which lead to premature deaths of captive orcas, - separation of mother orcas from their calves, - the collapse of dorsal fins in male orcas in captivity that happens only extremely rarely in the wild, and. SeaWorld blasts ex-trainer's character. SeaWorld has gone on the offensive, personally attacking the character of a former trainer who has authored a book critical of the theme parks’ treatment of its killer whales. 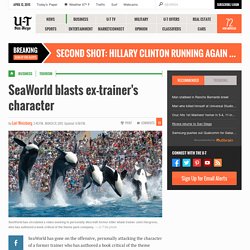 In an email sent Tuesday to media organizations, SeaWorld links to a nearly 5-year-old video provided by an “internal whistleblower” in which the author, John Hargrove, appears to be drunk and is using offensive language. A number of times throughout a nearly 5-minute-long taped cellphone conversation with a female friend, Hargrove, who indicates he’s been drinking, uses a racial slur. The woman was discussing an attack by a group of black men in which she’d allegedly been hit with a rock. Voice of the Orcas: Food Deprivation at SeaWorld. A Statement on Food Deprivation at SeaWorld Recently, the topic of killer whale food rationing & deprivation has made national news as SeaWorld vigorously defends its training practices & launches attacks at critics. 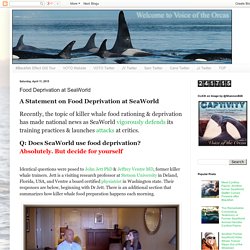 Q: Does SeaWorld use food deprivation? Absolutely. But decide for yourself Identical questions were posed to John Jett PhD & Jeffrey Ventre MD, former killer whale trainers. Miami Seaquarium: Release Lolita! - The Animal Rescue Site. 'I Was Disgusted': How One Trainer Left The SeaWorld Horror Show. Whale arrives from Moscow for shows next month. KARACHI: Notwithstanding concerns of experts against holding shows of marine mammals, a three-metre-long white whale has arrived here from Moscow and is currently being kept at the Maritime Museum where dolphin shows are scheduled early next month, a visit to the facility showed. 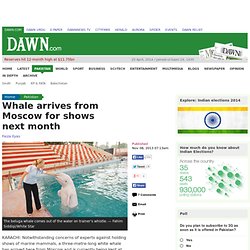 The 10-year-old marine mammal (Delphinapterus leucas) is often called beluga (meaning white one in Russian) and sea canary due to its high pitched twitter. The whale is listed in the IUCN/The World Conservation Union’s vulnerable category (the species faces a high risk of extinction). “It will be the first time that a dolphin show is being held in this part of the world. A foreign expert on water engineering has been with us for seven months to prepare the right living conditions for the cetacean,” said Syed Azfar Abbas representing the Karachi-based Dolphin Show International that he said would organise the show in collaboration with a Dubai-based company, Dolphin and I. Bad press, Harry Potter contributing to SeaWorld’s epic bellyflop - Fortune. Can SeaWorld Really Send Our Killer Whales to China? Will They? - Candace Calloway Whiting. “Ocean Kingdom is the first phase of transforming the last of the undeveloped Pearl River Delta islands into what Mr.

Su describes as the “Orlando of China” which “will become the new benchmark for the theme park industry.” The Chimelong Group. The short answer is yes, they can send the orcas to a foreign country. It is a viable option, and there are no regulations to prevent it. The recent shake-ups at SeaWorld show that this corporate business means business – they are replacing the Chief Operating Executive (CEO), restructuring the company’s Board of Directors, and in a Grinchy move they laid off over 300 employees in the middle of the holidays. Dolphinaria-Free Europe. Takeover of Harderwijk dolphinarium » ENDCAP. Captive Cetaceans Tragically Sad: Cetaceans Released from Captivity. Cetacean Releases compiled by Ken Balcomb As we know it is often said that cetaceans in captivity cannot be released thanks to the research by Ken Balcomb it has been proven that they not only can be released they HAVE been released.See the list below, I have highlighted some points you may find extra interesting too Kenneth C.

Balcomb III Copyright 1995 Center for Whale Research Friday Harbor, WA 98250. PETA est actionnaire SeaWorld, et ils sont ce qui suggère que la société d'investir dans orca sanctuaires. Click to enlarge Our minds were blown when we learned that PETA was a shareholder in SeaWorld, but according to spokesman David Perle, PETA purchased stock in the marine-mammal parks when SeaWorld held its IPO in 2013. "PETA purchased stock in SeaWorld when it first became publicly available, in April of 2013 and PETA currently owns 159 shares," Perle says. "In order to file resolutions, it’s required that we own at least $2,000 worth of common stock continuously, which we do, and have. " And one of those resolutions, which PETA announced today, is that it would like to see SeaWorld invest in orca sanctuaries – sea pens, basically – where it can retire its orcas, dolphins and other marine mammals to live out their lives.

Reimagining SeaWorld: An Open Letter To The New CEO. When news broke last week that SeaWorld CEO Jim Atchison was resigning, a friend emailed and asked if I “was surprised? " I replied: “Yes. Ric O'Barry's Dolphin Project - Let's Protect Dolphins Together. Following the collapse of SeaWorld shares (NYSE: SEAS) which hit an all-time low yesterday of $15.75 a share, SeaWorld Entertainmen\’s Chief Executive Officer — Jim Atchison, is stepping down.

In a press release issued by the company, SeaWorld announced: Effective January 15, 2015, Chairman David F. D’Alessandro will serve as the Company’s interim CEO until the Board of Directors (the “Board”) selects a permanent successor to current CEO and President, Jim Atchison, who will become Vice Chairman of the Board. While the move is not a surprise given SeaWorld’s abysmal stock performance — stock has dropped more than 50 percent, the giant marine park has also been hit with several lawsuits including a shareholder lawsuit accusing it of misleading investors over the impact of the “Blackfish” documentary. Atchison, who took on the role of CEO in 2009, admitted recently that the company should have battled back harder against what has been labeled the “Blackfish Effect.” NPA plans to nix whale and dolphin breeding ban at Vancouver Aquarium. Whales and dolphins will once more be allowed to breed at the Vancouver Aquarium with the blessing of the Non-Partisan Association, which won a majority on the park board in Saturday’s election.

The victory is particularly sweet, given that the facility was recently cited for animal mistreatment over its bottlenose dolphins. Last year, inspectors reported disturbing conditions at the aquarium, including trainers administering tranquilizers and hormonal therapies to the dolphins to reduce aggression and sexual behaviours, improper housing conditions, and a lack of shade for the animals. The facility was fined $24,700 (€18,000) for these offenses. The country’s Ministry for the Environment announced the news this week and the aquarium has been closed since last year. 不讓鯨豚因展演殞落 動團啟動反圈養. Keto: The Other Whale Who Killed His Trainer.