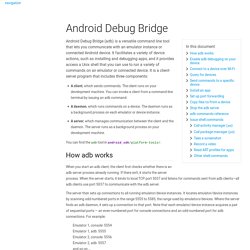 It facilitates a variety of device actions, such as installing and debugging apps, and it provides access a Unix shell that you can use to run a variety of commands on an emulator or connected device. It is a client-server program that includes three components: A client, which sends commands. The client runs on your development machine. You can invoke a client from a command-line terminal by issuing an adb command. You can find the adb tool in /platform-tools/. How adb works When you start an adb client, the client first checks whether there is an adb server process already running. The server then sets up connections to all running emulator/device instances. Emulator 1, console: 5554 Emulator 1, adb: 5555 Emulator 2, console: 5556 Emulator 2, adb: 5557 and so on... Enable adb debugging on your device You can now connect your device with USB. Adb -s am. Cron - How to schedule jobs in Jenkins. Ruby on Rails Tutorial. 7.1 Showing users In this section, we’ll take the first steps toward the final profile by making a page to display a user’s name and profile photo, as indicated by the mockup in Figure 7.1.1 Our eventual goal for the user profile pages is to show the user’s profile image, basic user data, and a list of microposts, as mocked up in Figure 7.2.2 (Figure 7.2 has our first example of lorem ipsum text, which has a fascinating story that you should definitely read about some time.) 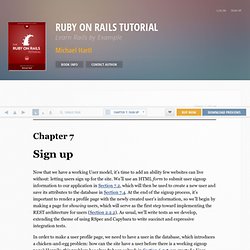 We’ll complete this task, and with it the sample application, in Chapter 11. Figure 7.1: A mockup of the user profile made in this section. Figure 7.2: A mockup of our best guess at the final profile page. 7.1.1 Debug and Rails environments The profiles in this section will be the first truly dynamic pages in our application. Listing 7.1: Adding some debug information to the site layout. app/views/layouts/application.html.erb <! This introduces the Sass mixin facility, in this case called box_sizing. Leerraum blog: Centos - Installing graphical X Window System (Boot Options, startx from command line)

Installing GUI Installing the Graphical Window System (X.org-X11) and the Default Desktop Environment on CentOS 6Performing the default "Minimal" install of CentOS 6 does not install the graphical subsystem (the X.org server) and the desktop environment (e.g. 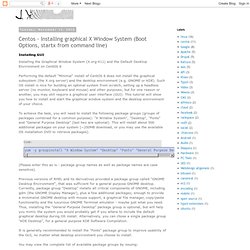 GNOME or KDE). Such OS install is nice for building an optimal system from scratch, setting up a headless server (no monitor, keyboard and mouse) and other purposes; but for one reason or another, you may still require a graphical user interface (GUI). This tutorial will show you how to install and start the graphical window system and the desktop environment of your choice.To achieve the task, you will need to install the following package groups (groups of packages combined for a common purpose): "X Window System", "Desktop", "Fonts" and "General Purpose Desktop" (last two are optional). 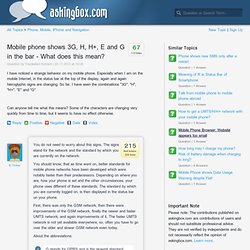 The signs stand for the network and the standard by which you are currently on the network. You should know, that as time went on, better standards for mobile phone networks have been developed which were notably faster than their predecessors. Depending on where you are, how your phone is set and the other circumstances, your phone uses different of these standards. The standard by which you are currently logged on, is then displayed in the status bar on your phone. First, there was only the GSM network, then there were improvements of the GSM network, finally the newer and faster UMTS network, and again improvements of it. About the abbreviations: I wrote a little info on the subject that contrasts the different transmission standards and networks more precisely: Difference between GSM, GPRS, EDGE, UMTS, HSPA and LTE.26.11.2012 at 19:42 ReplyPositive Negative. Epoch Converter - Unix Timestamp Converter.