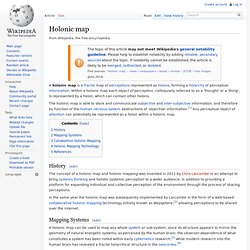 Within a holonic map each object of perception, colloquially referred to as a 'thought' or a 'thing', is represented by a holon, which can contain other holons. The holonic map is able to store and communicate subjective and inter-subjective information, and therefore by function of the human nervous system abstractions of 'objective' information.[1] Any perceptual object of attention can potentially be represented as a holon within a holonic map. History[edit] The concept of a holonic map and holonic mapping was invented in 2011 by Chris Larcombe in an attempt to bring systems thinking and holistic systemic perception to a wider audience, in addition to providing a platform for expanding individual and collective perception of the environment through the process of sharing perceptions. 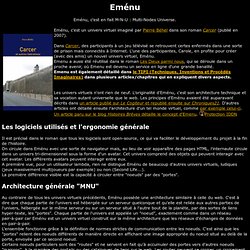 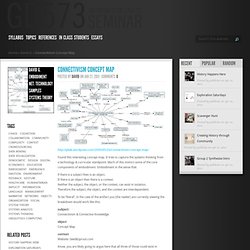 It tries to capture the systems thinking from a technology & curricular standpoint. Much of this mimics some of the core components of embodiment. Embodiment in the sense that: if there is a subject then is an object. If there is an object then there is a context. To be “literal”, in the case of the artifact you (the reader) are currently viewing the breakdown would work like this: subject: Connectivism & Connective Knowledge. WHAT IS YOUR FAVORITE DEEP, ELEGANT, OR BEAUTIFUL EXPLANATION? The Failure of the Occupy Movement or the Emergence of a Living Systems Organization. I got done chatting with a colleague this morning, who went on a bit of a rant about the failures of the Occupy movement. 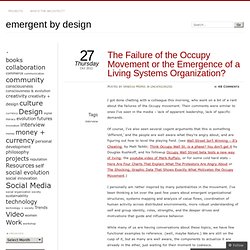 Their comments were similar to ones I’ve seen in the media – lack of apparent leadership, lack of specific demands. Of course, I’ve also seen several cogent arguments that this is something ‘different,’ and the people are well aware what they’re angry about, and are figuring out how to level the playing field. (see Wall Street Isn’t Winning – It’s Cheating, by Matt Taibbi; Think Occupy Wall St. is a phase? You don’t get it by Douglas Rushkoff, and his followup Occupy Wall Street beta tests a new way of living; the youtube video of Mark Ruffalo, or for some cold hard stats – Here Are Four Charts That Explain What The Protestors Are Angry About or The Shocking, Graphic Data That Shows Exactly What Motivates the Occupy Movement.) I personally am rather inspired by many potentialities in the movement. But, what we DO have in the Occupy movement is a petri dish.

Next Big Thing... "what is the next big thing" 27,900,000. Detritus. Big Quotes. Big Picture Small World. BigLinks take you to other sites that will enlarge your perspective, inform your mind and bring peace to the world. 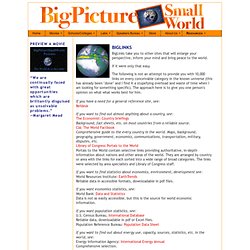 If it were only that easy. The following is not an attempt to provide you with 10,000 links on every conceivable category in the known universe (this has already been "done" and I find it a stupefying overload and waste of time when I am looking for something specific). The approach here is to give you one person's opinion on what what works best for him.

If you have a need for a general reference site, see: Refdesk If you want to find out almost anything about a country, see: The Economist: Country briefings Background, fact sheets, etc. on most countries from a reliable source. If you want to find statistics about economics, environment, development see: World Resources Institute: EarthTrends Reliable data in accessible formats, downloadable in pdf files. If you want population statistics, see: U.S. If you want to convert any number to another unit, see: Online Conversion. "the big picture" 1,920,000 Large.