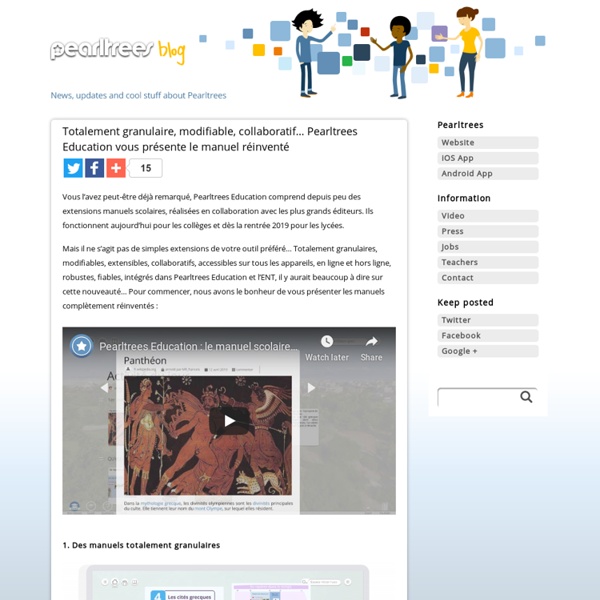 Peartrees: Multi-dimensional Curation A few weeks ago now, I posted an opinion piece on Technorati titled, 'Why Social Media Curation Matters'. Following this I received quite a lot of feedback and it’s thanks to one of these comments – posted by on my blog – that I was led to Pearltrees. In addition to this, I was also motivated to re-evaluate my position on the subject of curation and take a closer look at what I perceived that to be. At first I made the rather naïve assumption that the difference between Pearltrees and the services I’d discussed in my previous articles both here and on my blog, was purely aesthetic – Pearltrees has a beautifully designed Flash interface. However, as I delved further into the service, and further contemplated readers' feedback, I began to realise that there were actually some fundamental differences both in the approach of the developers and in my perception of curation.

survol géolocalisé 'Your own personal helicopter': New version of Maps will let you dive round exact 3D replicas of citiesHi-tech 'Google Planes' amass enough data to recreate buildings, bridges... even treesRe-vamp comes just as Apple 'plans to ditch Google Maps on the iPhone and iPad' By Eddie Wrenn Published: 20:07 GMT, 6 June 2012 | Updated: 16:18 GMT, 7 June 2012 6 reasons to use Pearltrees Pearltrees is the first and largest social curation community on the Internet. It’s a place to organize, discover and share all the cool content you find online. However, beyond this basic definition, a question remains: why would I want to use Pearltrees?

Curation - The Third Web Frontier -SVW Posted by Guest Writer - January 8, 2011 Here is a guest article by Partice Lamothe - CEO of Pearltrees (Pearltrees is a consulting client of SVW.) This is a lightly edited version of "La troisième frontière du Web" that appeared in the magazine OWNI - Digital Journalism - March 2010. The article argues that the founding pricinciples of the Internet are only now being implemented and that the next frontier is in organizing, or curating, the Internet. By Patrice Lamothe Everyone realizes that the web is entering a new phase in its development. graphe3D In an impressive mix of visual sciences and sci-fi, the ICT Graphics Lab at USC has created a low-cost volumetric 3-D display that brings every kid's hologram dreams closer to reality. The process is not simple but can be defined through a few key concepts: spinning mirrors, high-speed DLP Projections, and very precise math that figures out the correct axial perspective needed for a 360-degree image (even taking into account a viewer's positioning.) USC ICT Graphics Lab's Volumetric Display Different companies have been trying to create a viable 3-D technology for years, but have found several barriers in their way: small viewing areas, high costs and the viewer disconnect with blurry optical illusions. The most recent attempts have included Helio Display that recreate 2-D projections into floating 3-D illusions, as well as Jeff Han’s Holodust, which involves infrared lasers 'lighting up' particles in space.

Talmud Name of two works which have been preserved to posterity as the product of the Palestinian and Babylonian schools during the amoraic period, which extended from the third to the fifth century One of these compilations is entitled "Talmud Yerushalmi" (Jerusalem Talmud) and the other "Talmud Babli" (Babylonian Talmud). Used alone, the word "Talmud" generally denotes "Talmud Babli," but it frequently serves as a generic designation for an entire body of literature, since the Talmud marks the culmination of the writings of Jewish tradition, of which it is, from a historical point of view, the most important production. The Name. "Talmud" is an old scholastic term of the Tannaim, and is a noun formed from the verb "limmed" = "to teach." In the second place, the word "talmud"—generally in the phrase "talmud lomar"—is frequently used in tannaitic terminology in order to denote instruction by means of the text of the Bible and of the exegetic deductions therefrom.

merlin101 I'm not susprised google has a larger base to start from than pearltrees. Though I found facebook to be annoying enough. pearltrees keeps me pretty busy now. Altho given a few bucks I'll buy an online 3d world. Then I'll be busy about 20 hrs a day:) lol Happy Pearling L8trs by timepeaces Jul 25

There will be way more differences to anything out there as things get added . Mostly it's about their integration of all that people do . They seem to be trying to steer everyone towards using Chrome , Google+ etc...etc.. all Google products for everything ! They are doing a good job .I think they will succeed in grabbing many many millions into the fold ! The stats coming out are incredible ! It is sky rocketing ! Climbing at a much faster rate then FaceBook or Twitter or anything ! The circles are a huge hit so is the Hang outs ( video chat conferencing ) They broke the record for most people and time on , on one video chat room . It was in the thousands ! by mirlen101 Jul 25

Hi merlin101 I took a look at google+ it looks alot like pearltrees I think the only difference will be the instant chat area. I've been using gmail free phone to call long distance here in the usa to landlines. It works great:) L8trs by timepeaces Jul 25

I think that is a good assessment ! On the overflow issue .I usually just open new more defined pearltrees to split them up or just add one called 1,2,3 respectfully . by mirlen101 Jul 25

Take a look at the transe music section there are 84 pearls there now. If I get close to the 100 pearl limit for that one group I would make a second parent pearl tree called Infected Mushroom 02 here is the link. it's just an example of how I handle the pearl limits. You may have a better way. Happy Pearling l8trs by timepeaces Jul 25

When you pick a pearl or sub pearl from someone. Following activity just means that any new pearls that are added to that persons tree will also show up in the tree you picked. What I understand is,you will not get messages about new pearls unless your the founder of a pearltree team. I hope that answers your question. Tonight I added about 90 more new pearls in the music pearls section. Cont. by timepeaces Jul 25

Reply to pearhu about following pearls. I do not know the answer to your question. I will ask amsika and get back to you in a day or so. Sorry can't earlier real life has me very busy for about 2 days. Happy Pearling L8trs by timepeaces Jul 22

So far I'm just setting up Pearltree connections G+ and CEO's G+ circles . You have to have a Google+ account to get in , which is only on invite now . You can join any of my groups and I can invite you in if you aren't in already . You might want to be on my "peartrees connections " G+ circle so I can put you in the other groups as they are added . Like the Photography group . I'm listed as "Marvin Hayes ( artist ) " most other places I can be found as "mirlen101" So if you want a Google+ invite let me know . The place is really humming ! Big Wigs /CEO's everywhere ! by mirlen101 Jul 21

Thanks for that info, i just noticed that "NEW" tag, What's the url of that group's G+ account? by pearhu Jul 21

BTW I'm an artist and amateur photographer . I have about half a million hit/views on webshots.com ( where my art and photography are ) I just got on Google+ the new social network still being beta tested before it's officially open to the public . Going to be starting some groups on there that link through various sites like pearltrees ,linkedin, FaceBook etc... for people to get info on photography and art etc.. Some of the people who founded this company ( pearltrees.com ) are on there ( Google+ ) already . The head of the company is . by mirlen101 Jul 21

That term is kind of misleading they don't seem to have a way to sift or check for new items ( pearls ). I think it just refers to the fact that any Pearltree you put into yours will be updated with whatever I put in . There are headers that will say "NEW " on the pearltree icon itself if there has been recent additions or activity . I wish they did have more ways of notification of new content . The only real way is to go look in the pearltrees to see if anything has been added ;-/ Really makes it hard to find new content ;-/ They mostly just notify you about what people are saying or if they have added one of your pearls or pearltrees to theirs . by mirlen101 Jul 21

When i picked your root pearl it told me that i'm now following your activity ... how to check your latest pearls!? I didn't follow any other users since i registered. by pearhu Jul 21