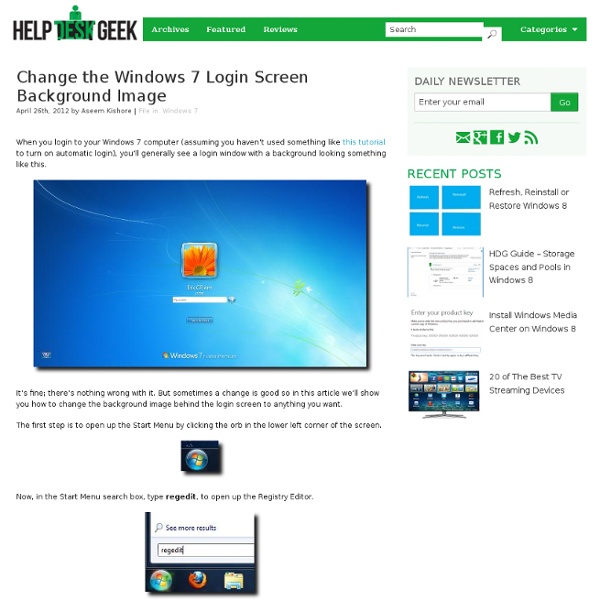 When you login to your Windows 7 computer (assuming you haven’t used something like this tutorial to turn on automatic login), you’ll generally see a login window with a background looking something like this. It’s fine; there’s nothing wrong with it. But sometimes a change is good so in this article we’ll show you how to change the background image behind the login screen to anything you want. The first step is to open up the Start Menu by clicking the orb in the lower left corner of the screen. Now, in the Start Menu search box, type regedit, to open up the Registry Editor. When the Registry Editor appears in the Start Menu, click the Enter key to launch it. Now, right-click on the HKEY_LOCAL_MACHINE folder, and choose the Find option. The search window will appear so perform a search for OEMBackground. Note: it’s possible that OEMBackground doesn’t exist on your system; if this is the case, adding a new DWORD value with the name of OEMBackground will fix things.

64 Things Every Geek Should Know If you consider yourself a geek, or aspire to the honor of geekhood, here’s an essential checklist of must-have geek skills. The term ‘geek’, once used to label a circus freak, has morphed in meaning over the years. What was once an unusual profession transferred into a word indicating social awkwardness. As time has gone on, the word has yet again morphed to indicate a new type of individual: someone who is obsessive over one (or more) particular subjects, whether it be science, photography, electronics, computers, media, or any other field.

ShareMouse – Use One Mouse & One Keyboard Across Multiple Computers Better even than a multiple monitor set-up, is the multiple computer set-up. A familiar phenomenon for the geek with a laptop for on the go and a desktop computer at home or at work. Instead of splitting your computing power over several displays, you’re putting several disjunct systems in parallel. Then again, it’s almost comical how you have to juggle your computer mice and keyboards. An awkward factor that only increases with the number of devices on your desk. 64 Things Every Geek Should Know - laptoplogic.com The term ‘geek’, once used to label a circus freak, has morphed in meaning over the years. What was once an unusual profession transferred into a word indicating social awkwardness. As time has gone on, the word has yet again morphed to indicate a new type of individual: someone who is obsessive over one (or more) particular subjects, whether it be science, photography, electronics, computers, media, or any other field. A geek is one who isn’t satisfied knowing only the surface facts, but instead has a visceral desire to learn everything possible about a particular subject.

10 Gear Items You Need for Any Camping Trip Camping doesn’t need to mean sleeping uncomfortably and dining plainly. Having the right camping equipment can make even the most camping averse person enjoy the great outdoors. Many travelers find that they actually enjoy camping if they are prepared and have all the necessary gear – plus tossing in a few luxury camping items can’t hurt (despite what some campers say, camping doesn’t have to mean roughing it). Camping gear has evolved incredibly through the years, but the essentials remain the same. From having a comfortable place to lay your head to having all the basics for exploring from base camp – here are the top 10 camping items you need to keep safe and comfortable during your next camping trip.

30 Best Room Pictures of the Week - May 04th to May 11th, 2012 1. I really love this pool 2. Five Geek Social Fallacies Within the constellation of allied hobbies and subcultures collectively known as geekdom, one finds many social groups bent under a crushing burden of dysfunction, social drama, and general interpersonal wack-ness. It is my opinion that many of these never-ending crises are sparked off by an assortment of pernicious social fallacies -- ideas about human interaction which spur their holders to do terrible and stupid things to themselves and to each other. Social fallacies are particularly insidious because they tend to be exaggerated versions of notions that are themselves entirely reasonable and unobjectionable. It's difficult to debunk the pathological fallacy without seeming to argue against its reasonable form; therefore, once it establishes itself, a social fallacy is extremely difficult to dislodge. It's my hope that drawing attention to some of them may be a step in the right direction. In any event, here are five geek social fallacies I've identified.

Hacker: #define [originally, someone who makes furniture with an axe] The term `hacker' also tends to connote membership in the global community defined by the net. It also implies that the person described is seen to subscribe to some version of the hacker ethic. It is better to be described as a hacker by others than to describe oneself that way.