Aggregation and curation: two concepts that explain a lot about digital change 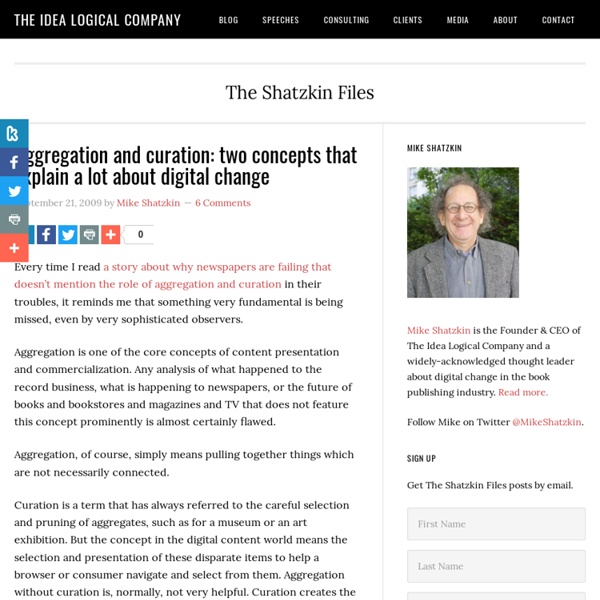 Aggregation and curation: two concepts that explain a lot about digital change Every time I read a story about why newspapers are failing that doesn’t mention the role of aggregation and curation in their troubles, it reminds me that something very fundamental is being missed, even by very sophisticated observers. Aggregation is one of the core concepts of content presentation and commercialization. Any analysis of what happened to the record business, what is happening to newspapers, or the future of books and bookstores and magazines and TV that does not feature this concept prominently is almost certainly flawed. Curation is a term that has always referred to the careful selection and pruning of aggregates, such as for a museum or an art exhibition. NOcontent makes its way from its creator to the public without aggregation. Publishers are aggregators, pulling together lists of books to present a (publisher-) branded offering to bookstores, libraries, and various review media. 1. 2. 3. Related:  Digital Research

APA Formatting and Style Guide Summary: APA (American Psychological Association) style is most commonly used to cite sources within the social sciences. This resource, revised according to the 6th edition, second printing of the APA manual, offers examples for the general format of APA research papers, in-text citations, endnotes/footnotes, and the reference page. Contributors: Joshua M. Please use the example at the bottom of this page to cite the Purdue OWL in APA. To see a side-by-side comparison of the three most widely used citation styles, including a chart of all APA citation guidelines, see the Citation Style Chart. You can also watch our APA vidcast series on the Purdue OWL YouTube Channel. General APA Guidelines Your essay should be typed and double-spaced on standard-sized paper (8.5" x 11"), with 1" margins on all sides. Include a page header (also known as the "running head") at the top of every page. Major Paper Sections Title Page Running head: TITLE OF YOUR PAPER Image Caption: APA Title Page Abstract

Real-Time News Curation - The Complete Guide Part 6: The Tools Universe Real-Time News Curation: Part 6 - The Tools and Technologies In this part of the guide you will find: 1. A Brief History of News Curation Tools 2. 3. 4. 5. "I've spent a good deal of time searching for a word other than "Curation" in part because of the connection to museums (which I feared sounded elitist and historic). 1) A Brief History of News Curation Tools The first news curation tools that I am aware of came out in late 2004 - early 2005, reflecting from the very beginning a growing need for both small publishers as well as for medium and large content publishers to be able to aggregate, filter and manually re-order and select the specific content items to be published in a news channel. MySyndicaat, whose parent company, Kipcast has now grown into a multi-faceted service providing advanced news aggregation and republishing widgets for online brands and media companies, has been the true pioneer of this space. With both tools the hard part is knowing "how to do" things. b. filter and

Curation will beat distribution CTAM EuroSummit ’11. The curation of content is needed if audiences are to be able to cut through the noise of social media, according to the futurologist Gerd Leonhard. In a presentation at the annual cable marketing conference, held this year in Malta, Leonhard said that the current actions of the geeks would be a global standard within five years. “It’s not about a million channels, we have a million channels, and it’s about what you want to watch.” Leonhard claimed that Twitter was already replacing CNN as a global news source. Leonard described the experience of watching the Batman movie The Dark Knight on Facebook as “dreadful”, but said Facebook would ultimately move beyond the eight integrated services slated for imminent announcement, and carry a Netflix service that would in part be funded by the user’s data.

EasyBib Introducing The Curator's Code: A Standard for Honoring Attribution of Discovery Across the Web by Maria Popova UPDATE: Some thoughts on some of the responses, by way of Einstein. UPDATE 2: This segment from NPR’s On the Media articulates the project well — give it a listen. Ours is a culture and a time immensely rich in trash as it is in treasures.” ~ Ray Bradbury You are a mashup of what you let into your life.” ~ Austin Kleon Chance favors the connected mind.” ~ Steven Johnson As both a consumer and curator of information, I spend a great deal of time thinking about the architecture of knowledge. Until today. I’m thrilled to introduce The Curator’s Code — a movement to honor and standardize attribution of discovery across the web. One of the most magical things about the Internet is that it’s a whimsical rabbit hole of discovery — we start somewhere familiar and click our way to a wonderland of curiosity and fascination we never knew existed. In both cases, just like the words “via” and “HT,” the respective unicode character would be followed by the actual hotlink to your source.

Wists-ful thinking: lessons from a prelude to Pinterest Back in 2006, Wists, a visual bookmarking site I had launched a year earlier was gaining traction with women who were into crafts. I showed the website to two whip-smart friends, Shana Fisher and her husband, Jonathan Glick. Like many people, they didn’t buy my argument that collecting thumbnail image links would be a big deal, but they were less skeptical than most. I get too much credit for RSS and for Yelp, but the one thing that I can unashamedly claim to have invented is visual bookmarking, and more specifically the “choose images to thumbnail via a bookmarklet” method that Pinterest is based on. Wists’s service was originally dubbed “visual bookmarks.” To use Wists, you signed up and installed a bookmarklet that you clicked on while browsing other websites. There were several other visual bookmark sites that later appeared, including Kaboodle, Stylehive and later, ThisNext, but each of these was less like Pinterest in terms of flow. Wists was also too early.

EasyBib: Free Bibliography Generator - MLA, APA, Chicago citation styles the curators code The word “curation” in common usage has lost some its meaning. We think of it more in terms of collector, aggregator or disseminator and not as “caretaker” as is its true definition. We future and current archivists and librarians, are all curators of information. We are shepherds and superintendents of data and particularly in the online space, we should be setting the example for proper care. Anyone who tweets, facebooks, blogs, links, writes, or shares in the online space is similarly a curator of information. The new information economy is not based on amassing huge amounts of data but curating and providing context to important, true, interesting, and/or relevant information. I have been ruminating on this idea of late after reading the Curator’s Code by Maria Popova. The idea is that just as you attribute an idea you espouse to a person, book or quote, you should also reference from whom – from what curator – you found your item of information (picture, link, article, post etc).

The Beginner's Guide to Instagram Update: This post was updated November 2013 to reflect current statistics and tools. Even if you don't use Instagram, we're guessing you've encountered an Instagram image somewhere on the web — even if you didn't realize it. Instagram's calling card is the photo filter, a digital layer that, when added to a standard photo, gives it the appearance of professional editing. But while Instagram's filters revolutionized mobile photo editing, they're only a portion of the appeal. Its success caught the eye of the most valuable social network in the world. Instagram has surely come a long way, business-wise, since co-founders Kevin Systrom and Mike Krieger introduced the app in 2010. We're here to share the Instagram basics, whether you're new to the network or need some additional tips. We'd love to learn about your Instagram experiences. 1. Instagram has always been an almost exclusively mobile platform. Instagram accounts are public by default, but you may elect to create a private account.