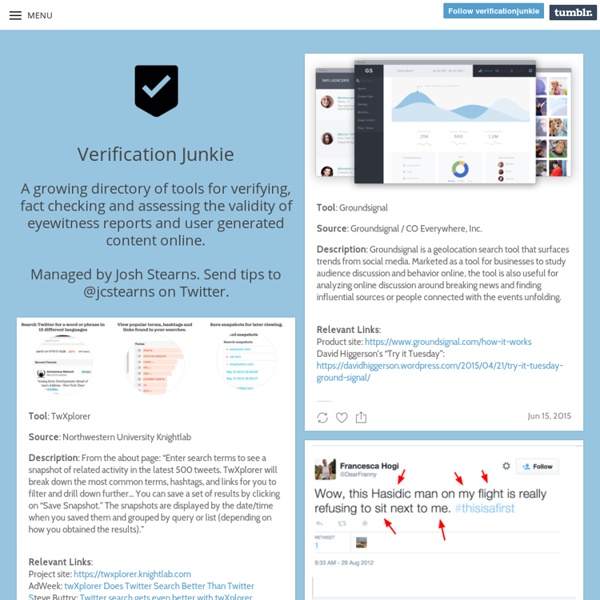 Basic newsgathering and verification tools from Google at #IJF16 Getting to know the tips, techniques and technology now available to journalists can make a big difference in speeding up the job. Speaking at the 10th International Journalism Festival in Perugia, Google media trainer Elisabetta Tola shared her tips for newsgathering and verification using Google tools. Advanced search “The problem we have when we are doing search today is that the amount of information is so huge,” Tola said. “If we’re looking for something specific it might come up on page 14, 15 or 316 [of search results].” But using and combining search operators can help refine searches to drill down to specific results that are more relevant and useful. Identify a Lie with 6 Simple Questions post written by: Marc Chernoff Email We all fall victim to at least a few lies during the course of our lifetime.

How to verify photos and videos on social media networks This image was mistakenly broadcast by one of France’s largest TV channels, France 2. The scene was described as having unfolded in Iran, back in December 2009. A cursory glance reveals a range of details that could allow us to verify its authenticity. Are Iranian police shields the same colour as in this image?

The cult of ignorance in the United States: Anti-intellectualism and the "dumbing down" of America © reddit.com There is a growing and disturbing trend of anti-intellectual elitism in American culture. It's the dismissal of science, the arts, and humanities and their replacement by entertainment, self-righteousness, ignorance, and deliberate gullibility.

Structured Water Pseudoscience and Quackery In the rather long page below, I try to present a critical examination of some of the claims about the nature and action of these fictional structure-altered waters ("SAW") in the context of the science as I believe it is presently known and understood. It is my hope that readers will thus be better equipped to make their own decisions about the value of these products. Any uncertainty that the chemistry community may have about the nature and existence of water clusters is not apparently shared by the various "inventors" who have not only "discovered" these elusive creatures, but who claim findings that science has never even dreamed of! These promoters have spun their half-baked crackpot chemistry into various watery nostrums that they say are essential to your health and able to cure whatever-ails-you. Well, if the water in your body is anything like the ideal shown at the top, then I have bad news: you are dead, and are no doubt residing in a deep-freeze!

6 Best Fact Checking Websites That Help You Distinguish Between Truth and Rumors The Internet has been called “The Information Super Highway” and rightly so. It’s now the epicenter of breaking news and the free flowing information has brought the world and the people closer and made us aware of other cultures and traditions. But all this comes with a flipside. ‘Infosmog’ and the challenge of misinformation - Demos Hillary Clinton’s well documented ties to satanic rituals are back in the headlines. Alarming footage of democrats stuffing ballot boxes is being shared by thousands online. We are even hearing confessions from her former hitman. You may be surprised to hear it might not be all that. Facebook admits it must do more to stop the spread of misinformation on its platform Facebook has responded to widespread criticism of how its Newsfeed algorithm disseminates and amplifies misinformation in the wake of the Trump victory in the US presidential election yesterday. Multiple commentators were quick to point a finger of blame at Facebook’s role in the election campaign, arguing the tech giant has been hugely irresponsible given the role its platform now plays as a major media source, and specifically by enabling bogus stories to proliferate — many examples of which were seen to circulated in the Facebook Newsfeed during the campaign. Last week Buzzfeed reported on an entire cottage industry of web users in Macedonia generating fake news stories related to Trump vs Clinton in order to inject them into Facebook’s Newsfeed as a way to drive viral views and generate ad revenue from lucrative US eyeballs. That’s a pretty hefty economic incentive to game an algorithm.

How to spot a fake Facebook page during a breaking news situation This is fake. Screenshot/Facebook. When the gunman of a mass shooting is named, the Internet rushes to find that person’s digital footprint. Field Guide to Fake News Sites and Hoax Purveyors The sharp increase in popularity of social media networks (primarily Facebook) has created a predatory secondary market among online publishers seeking to profitably exploit the large reach of those networks and their huge customer bases by spreading fake news and outlandish rumors. Competition for social media’s large supply of willing eyeballs is fierce, and a number of frequent offenders regularly fabricate salacious and attention-grabbing tales simply to drive traffic (and revenue) to their sites. Facebook has worked at limiting the reach of hoax-purveying sites in their customers’ news feeds, inhibiting (but not eradicating) the spread of fake news stories.

Related:
Related:  Disinformation   -  Spying and Disinformation to Crush Dissent and Keep Secrets   -  Disinformation & False Flags   -  Information War, Disinformation to Support War   -  Disinformation and Bad Science   -  Gapminder: Unveiling the beauty of statistics for a fact based world view.   -  Zététique — Wikipédia   -  CSI   -  Uncyclopedia | FANDOM powered by Wikia   -  Everything2   -  Principia Discordia | the book of Chaos, Discord and Confusion | Fnord!   -  Untrusted Connection   -  Axolot   -  You Are Not So Smart   -  Identify a Lie with 6 Simple Questions   -  Deception | Psychology Today   -  Literallyunbelievable.org   -  TruthTheory -   -  Think On Your Own   -  This Chart Shows The Bilderberg Group's Connection To Everything In The World   -  The Lesson of the Monkeys | Jason Wells   -  Mysite   -  JESTERS COURT – OFFICIAL BLOG   -  You Are Not So Smart   -  How Covert Agents Infiltrate the Internet to Manipulate, Deceive, and Destroy Reputations   -  He Climbs Down Into a Drain Holding a Carrier. Wait Till You See What’s Hiding in the Shadows - Scribol.com   -  How technology disrupted the truth | Katharine Viner | Media   -  The Anonymous Blacklist Promoted by the Washington Post Has Apparent Ties to Ukrainian Fascism and CIA Spying   -  Why Facts Don’t Change Our Minds | The New Yorker