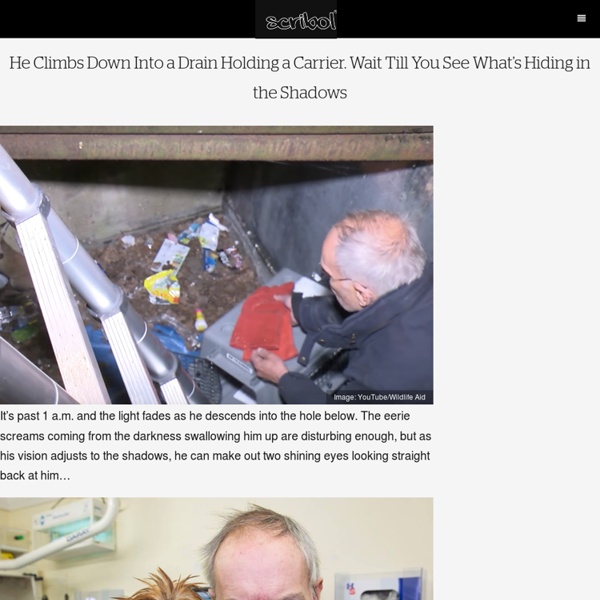 How to verify photos and videos on social media networks This image was mistakenly broadcast by one of France’s largest TV channels, France 2. The scene was described as having unfolded in Iran, back in December 2009. A cursory glance reveals a range of details that could allow us to verify its authenticity. Janis's ESL Home Page - Janis's ESL Links Janis's ESL Links People Work Everyday Activities Home

50 Kick-Ass Websites You Need to Know About It's time to update the entries in your browser's links toolbar. But with recent estimates putting the size of the internet at well more than 100 million distinct websites, it's getting harder and harder to get a handle on all the great stuff that's out there. That's why we've compiled this list. Identify a Lie with 6 Simple Questions post written by: Marc Chernoff Email We all fall victim to at least a few lies during the course of our lifetime. Some lies may be extremely troublesome to our personal wellbeing, while other “white lies” may be far more innocuous. Either way, a lie is meant to deceive. So how can we avoid falling victim to a lie in the future?

6 Best Fact Checking Websites That Help You Distinguish Between Truth and Rumors The Internet has been called “The Information Super Highway” and rightly so. It’s now the epicenter of breaking news and the free flowing information has brought the world and the people closer and made us aware of other cultures and traditions. But all this comes with a flipside. The amount of misinformation that is spread on the web is staggering. It is spread mainly via Websites, Social Networks, and Email. The Hot Topics for such misinformation are Politics, Government Policies, Religion and various Scams and Hoaxes. Field Guide to Fake News Sites and Hoax Purveyors The sharp increase in popularity of social media networks (primarily Facebook) has created a predatory secondary market among online publishers seeking to profitably exploit the large reach of those networks and their huge customer bases by spreading fake news and outlandish rumors. Competition for social media’s large supply of willing eyeballs is fierce, and a number of frequent offenders regularly fabricate salacious and attention-grabbing tales simply to drive traffic (and revenue) to their sites. Facebook has worked at limiting the reach of hoax-purveying sites in their customers’ news feeds, inhibiting (but not eradicating) the spread of fake news stories. Hoaxes and fake news are often little more than annoyances to unsuspecting readers; but sometimes circulating stories negatively affect businesses or localities by spreading false, disruptive claims that are widely believed. National Report World News Daily Report

6 Quick Ways to Spot Fake News The spectrum of less-than-credible links posted to social media sites is vast. In addition to deliberately written fake news stories (often somewhat inaccurately tagged as “satire”), the online world abounds with articles that are based on exaggerated, misconstrued, manipulated, misrepresented, or outright deceptive premises. It’s fair to say that the majority of users on social media sites wish to share interesting, funny, compelling, unique, or otherwise discussion-worthy material without having to run full-scale fact checks on everything. Six Easy Ways To Tell If That Viral Story Is A Hoax “And so it begins … ISIS flag among refugees in Germany fighting the police,” blared the headline on the Conservative Post; “with this new leaked picture, everything seems confirmed”. The image in question purported to show a group of Syrian refugees holding ISIS flags and attacking German police officers. For those resistant to accepting refugees into Europe, this story was a godsend. The photo quickly spread across social media, propelled by far-right groups such as the English Defence League and Pegida UK. At the time of writing, the page claims to have been shared over 300,000 times.

Related:  COMIC
Related:  Disinformation   -  Spying and Disinformation to Crush Dissent and Keep Secrets   -  Disinformation & False Flags   -  Information War, Disinformation to Support War   -  Disinformation and Bad Science   -  Gapminder: Unveiling the beauty of statistics for a fact based world view.   -  Zététique — Wikipédia   -  CSI   -  Uncyclopedia | FANDOM powered by Wikia   -  Everything2   -  Principia Discordia | the book of Chaos, Discord and Confusion | Fnord!   -  Untrusted Connection   -  Axolot   -  You Are Not So Smart   -  Identify a Lie with 6 Simple Questions   -  Deception | Psychology Today   -  Literallyunbelievable.org   -  TruthTheory -   -  Think On Your Own   -  This Chart Shows The Bilderberg Group's Connection To Everything In The World   -  The Lesson of the Monkeys | Jason Wells   -  Mysite   -  JESTERS COURT – OFFICIAL BLOG   -  Verification Junkie   -  You Are Not So Smart   -  How Covert Agents Infiltrate the Internet to Manipulate, Deceive, and Destroy Reputations   -  How technology disrupted the truth | Katharine Viner | Media   -  The Anonymous Blacklist Promoted by the Washington Post Has Apparent Ties to Ukrainian Fascism and CIA Spying   -  Why Facts Don’t Change Our Minds | The New Yorker