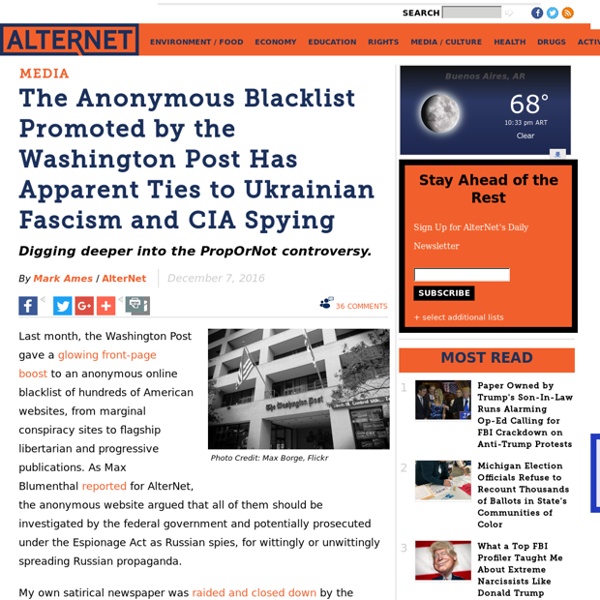 Photo Credit: Max Borge, Flickr Last month, the Washington Post gave a glowing front-page boost to an anonymous online blacklist of hundreds of American websites, from marginal conspiracy sites to flagship libertarian and progressive publications. As Max Blumenthal reported for AlterNet, the anonymous website argued that all of them should be investigated by the federal government and potentially prosecuted under the Espionage Act as Russian spies, for wittingly or unwittingly spreading Russian propaganda. My own satirical newspaper was raided and closed down by the Kremlin in 2008, on charges of “extremism”—akin to terrorism—which I took seriously enough to leave for home for good. What the Washington Post did in boosting an anonymous blacklist of American journalists accused of criminal treason is one of the sleaziest, and most disturbing (in a very familiar Kremlin way) things I’ve seen in this country since I fled for home. Smearing a progressive journalism icon

Related:  Fake News, Satire, Propaganda • Freedom of Speech and Censorship • Fascism and the Security State • Spying and Disinformation to Crush Dissent and Keep Secrets • Spying in and out of the U.S., Cover Stories, Sheep-Dipping, NSA

Corporate Media Admits Its Own 'Russian Propaganda' Story May Be 'Fake News' Washington, D.C. – In what amounts to the Washington Post attempting to maintain a semblance of credibility after running a propaganda piece labeling numerous websites, including The Free Thought Project, as “Russian propaganda,” Post editors on Wednesday attempted to distance themselves from the story by attaching to the top of the article a disclaimer that among other things claims that the Post cannot “vouch for the validity of PropOrNot’s finding regarding any individual media outlet.” Here is the Editor’s disclaimer recently added to the story: Editor’s Note: The Washington Post on Nov. 24 published a story on the work of four sets of researchers who have examined what they say are Russian propaganda efforts to undermine American democracy and interests. One of them was PropOrNot, a group that insists on public anonymity, which issued a report identifying more than 200 websites that, in its view, wittingly or unwittingly published or echoed Russian propaganda.

WikiLeaks Just DUMPED EVERYTHING – This is HUGE – Historic Activity by Wikileaks – Read and Share before it is taken down! NOTICE: This is a developing story, it is being actively updated as information comes available. Please check back for updates. Last Updated 4:54PM GMT (12:54 PM Eastern United States) UPDATE 4:54PM GMT (12:54PM EST) Information circulating that suggests there are more members of @Wikileaks impacted. Not just Assange at the Embassy.

FBI Orders Teachers To Report Students Who Question Government New federal guidelines have just been introduced across the country, and what they mandate is quite disturbing to civil libertarians. The FBI has now instructed high schools across the nation to report students who in any way criticize government policies and what the report phrases as “western corruption.” The FBI is interested in determining – as part of some warped “pre-crime” program – who might become potential future terrorists. The CIA and the Press: When the Washington Post Ran the CIA’s Propaganda Network Image by Nathaniel St. Clair Last week, the Washington Post published a scurrilous piece by a heretofore obscure technology reporter named Craig Timberg, alleging without the faintest evidence that Russian intelligence was using more than 200 independent news sites to pump out pro-Putin and anti-Clinton propaganda during the election campaign. Under the breathless headline, “Russian propaganda effort helped spread ‘fake news’ during election, experts say,” Timberg concocted his story based on allegations from a vaporous group called ProporNot, run by nameless individuals of unknown origin, whom Timberg (cribbing from the Bob Woodward stylesheet) agreed to quote as anonymous sources.

Did the Russians Really Hack the DNC? Russia, we are told, breached the servers of the Democratic National Committee (DNC), swiped emails and other documents, and released them to the public, to alter the outcome of the U.S. presidential election. How substantial is the evidence backing these assertions? Hired by the Democratic National Committee to investigate unusual network activity, the security firm Crowdstrike discovered two separate intrusions on DNC servers. Crowdstrike named the two intruders Cozy Bear and Fancy Bear, in an allusion to what it felt were Russian sources. According to Crowdstrike, “Their tradecraft is superb, operational security second to none,” and “both groups were constantly going back into the environment” to change code and methods and switch command and control channels. On what basis did Crowdstrike attribute these breaches to Russian intelligence services?

The Fake News Witch-Hunters At The Washington Post The Washington Post is pushing a campaign to censor alternative media sources. The One Franklin Square Building on K Street NW in Washington, Friday, Dec. 11, 2015, home of the Washington Post newspaper. (AP Photo/Pablo Martinez Monsivais) No one outside of a few obsessed cranks would’ve noticed it if the Washington Post hadn’t given it front page prominence last week: a formerly obscure web site, propornot.com, which purports to identify a “Russian active measures” campaign with some very specific goals in mind As Post “reporter” Craig Timberg put it: “The flood of ‘fake news’ this election season got support from a sophisticated Russian propaganda campaign that created and spread misleading articles online with the goal of punishing Democrat Hillary Clinton, helping Republican Donald Trump and undermining faith in American democracy, say independent researchers who tracked the operation.” “You’ve seen reports.

Billionaires Funding Plot To Destroy Dissent And Protest In Colleges Above Photo: By Gallo Images / Sowetan / Thulani Mbele A multimillion-dollar campaign to stifle protest in universities. As far-right speakers face loud student opposition at their university speaking gigs, conservative lawmakers in several states are introducing legislation that cracks down on protesters. As uncovered by UnKoch My Campus’ Ralph Wilson, numerous states have borrowed their so-called “campus free speech” bills from the rightwing Goldwater Institute, which is funded by conservative plutocrats including Charles Koch and the Mercer family.

Obama Federalizes Police Forces in 6 US Cities - The cities chosen for the COPS pilot program are Minneapolis, Fort Worth, Pittsburgh, Stockton, Birmingham and Gary, IN. As mentioned by Obama’s 21st Century Policing Task Force, the founding premise for this federal takeover is supposedly the rampant racism of the American police, who victimize poor, innocent populations for no other reason than color. Gary is a city with an 83% black population; only ten percent of its citizens are white; the demographics of Gary are just further evidence of the fallacy of this take over. Gary is a crime-riddled, liberal stronghold, eager to prove to the Big Brother Obama that they are in need of federal oversight and a big fat check.

The ultimate weapon against dissent A lone protester in Dallas for the 50th anniversary of the JFK assassination in 2013. (LA Times photo) “Now it’s conspiracy – they’ve made that something that should not even be entertained for a minute, that powerful people might get together and have a plan. The CIA, NSA and Pokémon Go With Pokémon Go currently enjoying, what I would call, a wee-bit-o-success, now seems like a good time to talk about a few things people may not know about the world's favorite new smartphone game. This is not an opinion piece. I am not going to tell you Pokémon Go is bad or that it invades your privacy. I’m merely presenting verifiable facts about the biggest, most talked about game out there. + Also on Network World: The Pokémon Go effect on the network + Let’s start with a little history.

Russian propaganda effort helped spread ‘fake news’ during election, experts say Editor’s Note: The Washington Post on Nov. 24 published a story on the work of four sets of researchers who have examined what they say are Russian propaganda efforts to undermine American democracy and interests. One of them was PropOrNot, a group that insists on public anonymity, which issued a report identifying more than 200 websites that, in its view, wittingly or unwittingly published or echoed Russian propaganda. A number of those sites have objected to being included on PropOrNot’s list, and some of the sites, as well as others not on the list, have publicly challenged the group’s methodology and conclusions. The Post, which did not name any of the sites, does not itself vouch for the validity of PropOrNot’s findings regarding any individual media outlet, nor did the article purport to do so.

3 Popular Mainstream Media Journalists Come Together & Tell The Truth About Tell-Lie-Vision The world is changing so fast, and many people, at least in the developed world, are starting to see through corporately owned mainstream media. They’ve been caught red handed ‘faking’ and lying about major global events on multiple occasions, and now, some of their employees are leaving their jobs and telling the truth about something that dominates a large portion of mainstream media. That being said, it’s clear that not every single thing we see on mainstream western television is a lie, but it seems that much of it is or at least has corporate and political bias’ behind it, especially when it comes to major global events like war and terrorism.

Don't Be Terrorized By Your Government This Fourth of July CNNAs Americans prepare to celebrate Independence Day, officials in the FBI and the Department of Homeland Security are warning us that there's a heightened threat of Islamist terrorist attacks. CNN is reporting that law enforcement officials believe that the Islamist threat is "the highest in years." CIA deputy director turned CBS security analyst Michael Morrell declared, "I wouldn't be surprised if we're sitting here a week from today talking about an attack over the weekend in the United States. That's how serious this is." So just how "serious" is the risk? Well, the risks to American lives aren't very big. CNN Reporter DIDN'T KNOW She Was STILL ON THE AIR, ADMITS OBAMA PAID THEM TO LIE - VIA| If you happen to watch CNN, you’ll know that the network has become a front for the Clinton Campaign and a bastion for spreading liberal nonsense. Now, a report by one of its own journalists has found that CNN has also taken bribes from foreign countries. The CNN reporter who blew the lid on this issue was none other than Amber Lyon, formerly employed by CNN and an “award winning reporter.”