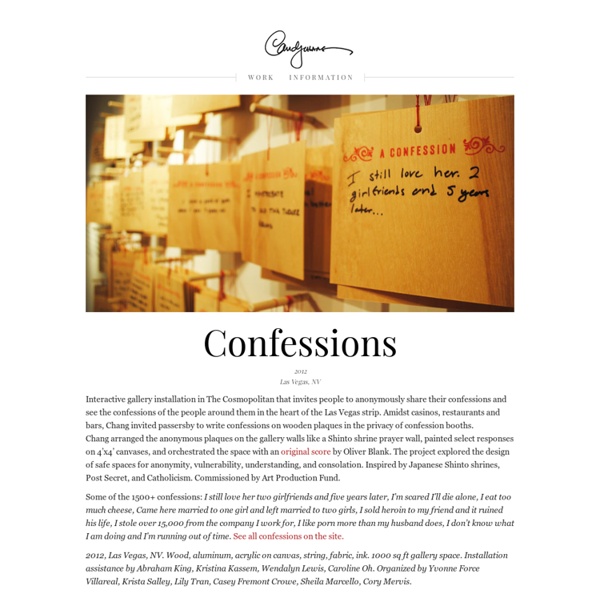 2012 Las Vegas, NV Interactive gallery installation in The Cosmopolitan that invites people to anonymously share their confessions and see the confessions of the people around them in the heart of the Las Vegas strip. Amidst casinos, restaurants and bars, Chang invited passersby to write confessions on wooden plaques in the privacy of confession booths. Chang arranged the anonymous plaques on the gallery walls like a Shinto shrine prayer wall, painted select responses on 4’x4’ canvases, and orchestrated the space with an original score by Oliver Blank. The project explored the design of safe spaces for anonymity, vulnerability, understanding, and consolation. Inspired by Japanese Shinto shrines, Post Secret, and Catholicism. 2012, Las Vegas, NV.

5 Tibetans Energy Rejuvenation Exercises We've been practicing, teaching and recommending the 5 Tibetan Energy Rejuvenation Exercises since 1998. You can do the whole routine in 15 minutes and only need enough floor space for your body while laying down and enough air space for your arms to be outstretched. The 5 Tibetans represent a great way to keep your body in shape when you have limited time for a physical workout or limited space for a complete yoga routine.

Top 10 Tools For Managing Your Social Media Accounts Attempting to juggle each and every one of your social media accounts can be tricky, scary and time-consuming. For example, while you’re busy updating your Facebook status, you might have forgotten to favorite a tweet. Speaking of tweets, when is the best time to send one out to followers? Ugh. It can seriously give you a migraine. Thankfully, we live in a world and time where developers are rectifying that problem! Daring Artist 'Sleeps' On Strangers In Poetic Subway Project The project began in 2012, when Ferrandi decided to change or reshape the way she experienced a subway ride. She began by catching a ride on a crowded subway, during the evening rush hour, and nabbed a seat next to a fellow traveller. From there she embarked on a mental and emotional experiment of "resculpting" the space between her body and a stranger's, transforming what she considered a stiff and restricted space into a malleable, inviting distance by resting her head on that person's shoulder.

Print Version - Five Tibetan Rites By Mary Kurus Copyright Mary Kurus 2001, All Rights Reserved Background In 1985 a book called The Ancient Secret of the Fountain of Youth written by Peter Kelder was published which for the first time fully described an exercise program for "youthing". This is an exercise program used by Tibetan monks to live long, vibrant and healthy lives. ‘Once Upon a Time’ Characters We Want Brought Back — Neal, Graham Ruby, Elsa Not everyone gets a happy ending on ABC’s Once Upon a Time — including the fans who latch onto, and then must bid adieu to, characters that are either doomed or deigned to disappear. RELATEDOnce Upon a Time‘s Rocky Rumbelle and More Burning Qs Answered In the wake of the resurrection of Maleficent, a saucy sorceress who many felt had been unjustly jettisoned way back in Season 1, TVLine took stock of other characters whose potential was left untapped, and who, if among the living/mostly dead, could still bring a certain spark to life in never-quiet Storybrooke. Review our countdown below, then weigh in on the gone-too-soon characters you’d most like to see be given a second chance.