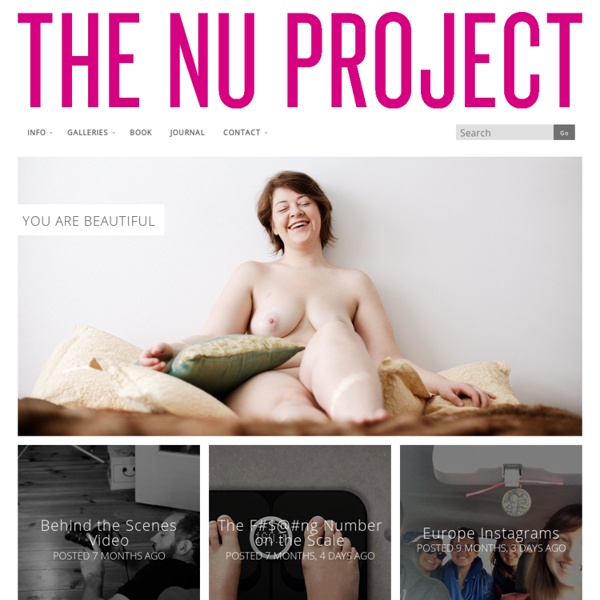 Thank you for being here. The Nu Project is a series of honest nudes of women from all over the world. The project began in 2005 and has stayed true to the original vision: no professional models, minimal makeup and no glamour. The focus of the project has been and continues to be the subjects and their personalities, spaces, insecurities and quirks. To date, over 150 women across North and South America have participated in the project. Without their courage, confidence and trust, none of this would have been possible.

Self-portraits done to a different drug every day Follow Bob on Tapiture Artist Bryan Lewis Saunders conducted a bizarre experiment. For several weeks, he took a different drug every day and made a portrait of himself under the influence. Second Adolescence - Ben Gore Introduction to Second Adolescence by Alexander Norton "Being young is something precious. Each birthday that comes brings new challenges as our bodies change, our ideas evolve and our situations become greater. Our inner workings make us almost unrecognisable from when we were children.

WANG (Women Against Non-essential Grooming) Women’s difficulty with pull-ups is about more than biology | Fit and Feminist (via rememo) And I always want to point out here: women, on average, possess more lower-body strength, while men, on average, possess more upper-body strength. There’s a lot of overlap and it isn’t always individually applicable, but that’s the generalization, averaging across the population. But we SOCIALLY value upper-body strength, and upper-body muscles. So we construct women as weaker, because we refuse to measure them on the body parts where they may be stronger, we devalue those. Lifting is mostly done with the legs.

The Patti Smith Blog crcksnaphtgrph asked: i love this blog, it's my new favourite. i could look at Patti Smith photos forever. :) thank you, i’m glad! Anonymous asked: it is my photo and i would like you to remove - it is not a photo I want on the internet - please do not make me pursue this as an infringement of my copyright-- lynn goldsmith i’ll remove it from this blog, as you wish. the original post that i only reblogged as it appeared by the original poster, is here however, if you’d like to contact them. tumblr works mostly by reblogging, and the one who originally posted it to tumblr is different from people who only share it on their tumblr.

Las hermanas Brown. Por Nicholas Nixon "By luck, I stumbled upon your site, and of course I wanted to try it out. I went on to deposit $500 on OneTwoTrade, then opened 5 positions and won 4. Took out the $500 and still have the profit of $288 to trade with. This is a great system you got there Sir, I definitely owe you one." Shelly Green - New York "I began with $200 on OneTwoTrade and I went down to $100 the first day.

'The Birthmark' - Nathaniel Hawthorne In the latter part of the last century there lived a man of science, an eminent proficient in every branch of natural philosophy, who not long before our story opens had made experience of a spiritual affinity more attractive than any chemical one. He had left his laboratory to the care of an assistant, cleared his fine countenance from the furnace smoke, washed the stain of acids from his fingers, and persuaded a beautiful woman to become his wife. In those days when the comparatively recent discovery of electricity and other kindred mysteries of Nature seemed to open paths into the region of miracle, it was not unusual for the love of science to rival the love of woman in its depth and absorbing energy. Such a union accordingly took place, and was attended with truly remarkable consequences and a deeply impressive moral. One day, very soon after their marriage, Aylmer sat gazing at his wife with a trouble in his countenance that grew stronger until he spoke.

Selfiexploratory The upper part shows charts that you can use as , while the lower part displays the . Click on any of the circles to see only selfies taken in that city. typography UK design studio Hype & Slippers has created beautiful cards for CardNest an online subscription service delivering beautiful, emotive and exclusive greetings cards to your doorstep. Three designs per month from the world’s most exciting illustrators and designers. Escape Kit / Twitter / Subscribe Why Dove’s Latest “Real Beauty” Video Gets It All Wrong Originally published on BodyLoveWellness and cross-posted here with their permission. Alternately titled: “Please, Please, Stop Sharing That Video.” Chances are, someone has sent you this video and told you how inspiring it was. To be honest, I didn’t find it inspiring at all. Instead, it just made me angry. Here we go again, with Dove pretending to empower women to love their bodies, with the big honking caveat that you should love your body only when you’re more conventionally attractive than you realize.

The 60 Most Powerful Photos Ever Taken That Perfectly Capture The Human Experience This incredible collection of moments represents the joy, innocence, despair, curiosity, and undying perseverance within all of us. No matter where we’re from, these are the emotions that unite us – it’s what makes us human. We set out to capture this spirit in 60 incredible photographs, and I truly hope you enjoy. Creating this list out of thousands of potential photos was a daunting, yet rewarding experience for me. I hope you loved it too (and if you did, share it with others below). Thanks for visiting us today!