21 Pictures That Will Restore Your Faith In Humanity 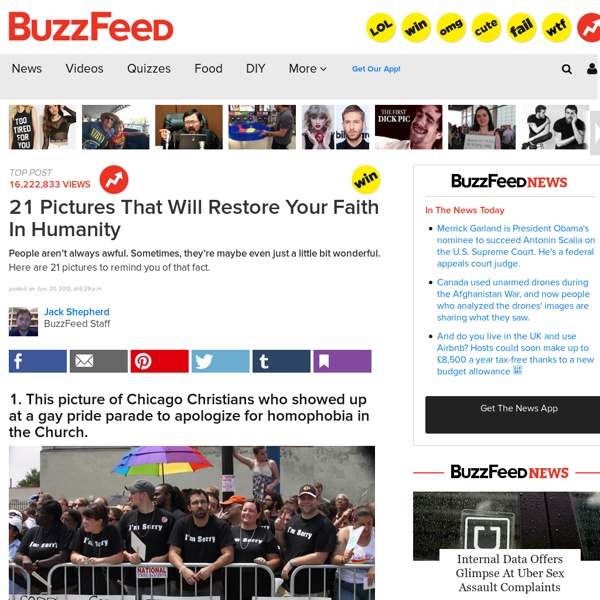 Related:  Us doing well for all

An Unlikely Friday Night Pizza Café Has A Big Heart At Moriah Pie in Norwood, Ohio, Erin and Robert Lockridge serve homemade pizza and diners pay what they can. Christopher Kuettner hide caption itoggle caption Christopher Kuettner Tricks + Treats: Cascade Braid with Sarah Lockhart Hello, dear readers! This is Sarah from Sweetestnest, and I could not be more excited to add a style post to Elsie's parade of Tricks + Treats! I think that braids are one of the most versatile and easy hairstyles to wear during Autumn. They are textured and seemingly unintentional, or smoothed and polished. Today, I'm sharing the cascade/waterfall braid with you. I think it's really easy to do on yourself, and others, and you can switch it up a bit to match your day's style.

Ranked: Disney Princesses From Least To Most Feminist It's hard to be liberated in a clamshell bikini. I just saw Brave, and it got me thinking about the grand tradition of Disney princesses. Brave is a Pixar movie, and its heroine, Merida, is a fairy-tale feminist. Disney princesses for the most part, are not. Most need to be rescued by their male love interests; almost all the Disney Princess movies end in marriage or engagement. Sketchbook Secrets: 50 Beautiful Sketchbook Scans The sketchbook is—to borrow a term from the new millenniums’ popular discourse—an artist’s BFF. It’s a diary for the visually inclined—a place where artists can most comfortably explore their personal thoughts, work out their visual needs, practice, maintain a visual history, and hopefully create the unpolished work that will eventually lead to amazing work for the world to see. But, sometimes, when we’re lucky, we get to see the process. Below are 50 beautiful sketchbook scans from 35 talented artists. Allen Sutton

On (Literally) Cleaning Out My Closet My parents’ house has always been a repository for things, a sort of free storage space. My brother and I would leave our stuff there during our “in between” stages of life; when we were in college, or traveling, or out of college and living in apartments too small to actually fit things in. Clothes we haven’t worn for years but might later, old furniture, physics notes from high school that could come in handy someday, art prints our exes left us, Polaroids. Stuff. Just stuff you accumulate along the way and never get around to throwing out. 9 Awesome Customer Service Stories The train passenger with no toilet paper who was saved by twitter An unlucky pooper who found himself in the stall on his train without toilet paper was recently saved by the power of Twitter and awesome customer service. It seems that 16-year-old Adam Greenwood was traveling on Virgin Trains when he found himself in the no-TP predicament. Left with no other option, Ol' Train-Pooper decided to tweet the company as a gag.

Homemade Hair Treatments - At Home DIY Hair Treatments - Womans Day Eggs, yogurt and honey are, at first glance, all components of a tasty breakfast—but they also happen to be hair treatment ingredients, and affordable, all-natural ones at that. And they're not the only ones. Did you know, for instance, that the oils in avocados more closely resemble our own skin's oils than any product in the beauty aisle does? Or that the mild acidity in lemon is an effective—and gentler—alternative to chemical-laden products? Next time your locks need a lift, save money by using one of these kitchen fixes.

Discover the world's most endangered species Wildscreen's Arkive project was launched in 2003 and grew to become the world's biggest encyclopaedia of life on Earth. With the help of over 7,000 of the world’s best wildlife filmmakers and photographers, conservationists and scientists, Arkive.org featured multi-media fact-files for more than 16,000 endangered species. Freely accessible to everyone, over half a million people every month, from over 200 countries, used Arkive to learn and discover the wonders of the natural world. Since 2013 Wildscreen was unable to raise sufficient funds from trusts, foundations, corporates and individual donors to support the year-round costs of keeping Arkive online. Design Seeds®: For All Who Love Color #ededed #e8dcca #b08a61 #66503c How To Get Over Yourself In 7 Easy Steps 1. Realize that your problems are everyone’s problems. It’s easy to work yourself into an insane kind of paranoia/depression about the current state of affairs. You have a lot of debt, jobs are really hard to find, you’re not getting paid enough, you might have to move in with your parents, you feel lied to by every authority figure to ever come into your life from the age of five.