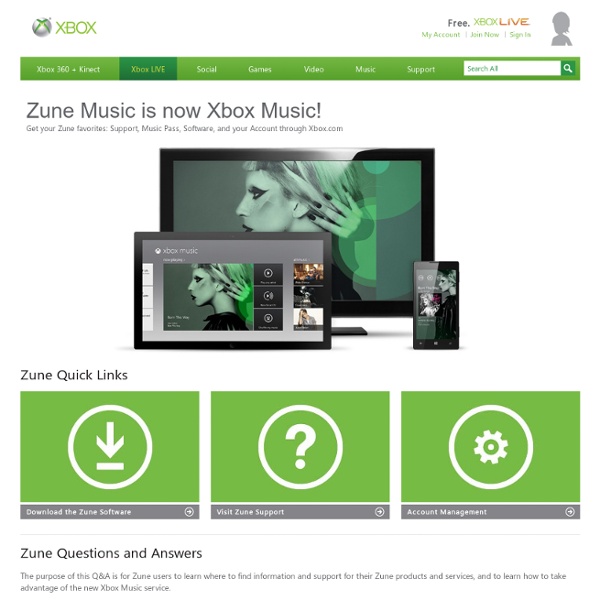 Record Club Thurston and Beck team up again with a crew of heavyweight studio musicians to tackle an apparently unreadable score for another song from Yanni’s Live At The Acropolis, with Thurston adding lyrics. The latest Record Club installment with Tortoise and Thurston from Sonic Youth. Building a Windows Phone 7 Application from Start to Finish October 21, 2011 This documentation and accompanying sample application will get you started building a complete application that targets Windows Phone OS 7.1. You will learn the basics of Silverlight and Windows Phone development by creating a simple fuel-tracking application for your car. Some of the tasks that you will learn include the following: Fuel Tracker Sample Application Mediaroom More shows. More Screens. More entertainment Ericsson Mediaroom is the world's most innovative and deployed IPTV platform. Mediaroom-powered TV services are offered by nearly 60 global operators in 23 countries, delivering services to nearly 13 million household subscribers with approximately 24 million set-top boxes. As the leader in first-to-scale features such as wireless receivers, multi-room DVR, instant channel change, and many others, Mediaroom is the choice for operators including AT&T, Deutsche Telekom AG, Portugal Telecom, TELUS and Swisscom AG, among others.

Samsung Smart TV Evolution Kit: Update your TV Every Year Soon you will be able to update your Smart TV every year with the latest technology. Samsung's Evolution kit upgrades your Smart Evolution enabled TV without having to replace the whole set. With Increased processor speed, more functions and additional content, your TV will never be the same again. Evolution Kit sold separately.

Music For Kids Who Can't Read Good An Album and a Song is a series where I pick a favorite album and song from a year (working up from 1960) for your listening pleasure. One rule: The year’s album and song can not both come from the same artist. Strangely enough, the Abbey Road got mixed reviews on it’s initial release, but retrospectively it’s rightfully considered The Beatles' last and perhaps greatest masterpiece.

Digits Blog Michael Jacket, aka Jarod Gibson of Odonis Odonis and Thighs, makes some seriously glorious noise. We’ve been quite enjoying his debut album Cruelty since it came out last October. Today we’re excited to be able to premiere this INCREDIBLE video for “Titan of Siren” directed by Rob Feulner of Bleu Nuit Video. Sensual VHS manipulations with beautifully vibrant colours washing over them, fitting together seamlessly with Jacket’s hammering track. One of the best videos we’ve seen this year.

Update Your Windows Phone 7 Device Using Simple Tool Chris Walshie, as previously reported has released a simple application that allows you to update your Windows Phone 7 device without any manual work such as disconnecting internet,etc. He used the Windows Phone support tools which Microsoft released yesterday to do this trick. Here is the update process he blogged today, All you need to do is run the ChevronWP7.Updater.exe console app and follow the prompts.Make sure you select the RIGHT language for your device.

Academic libraries and publishers: Working together in support of the creation and dissemination of new research knowledge and innovation Last month, we were delighted to host an event for our founder, Sara Miller McCune, to honour the academic library community. We had invited librarians, academics and senior university representatives from the UK and beyond to join us in celebrating the academic library, and to consider its future. The reception came at the end of a day of themed meetings for SAGE: a committee meeting of our library advisory board, a key group that supports SAGE in guiding our understanding of the changing library environment; and a round table discussion on the future of libraries in an Open Access landscape, hosted jointly with the British Library. Events like this are key in enabling strong communication between libraries and SAGE, to ensure that we continue to provide the support and services needed. We will be sharing more from both these meetings soon. We were delighted to have Dame Lynne Brindley, current CEO of the British Library, as our guest speaker at the reception.

Windows Phone 7 ‘NoDo’ Update Now Available To All As we previously reported that the Microsoftâ€™s Windows Phone 7 update page got updated with the â€˜NoDoâ€™ update change log. Now the March 2011 Update (OS Build: 7.0.7390.0) , as mentioned by Microsoft is now available to most of the Windows Phone 7 devices around the world. If you are hungry to have â€˜NoDoâ€™ , just plug your device into PC running Zune, you will get notification both on phone and PC that an update is available for your phone. So thatâ€™s it, if you have some space in your PC to backup your phone contents during update process (Donâ€™t worry, if you donâ€™t have enough space Zune will notify you), go ahead and click update. The following screen will appear showing update progress. After the update process, the following screen will appear,

What Windows Phone 7 would look like if it supported Nokia themes MyNokiaBlog have posted some fan-made mock-ups of what a Windows Phone 7 handset would look like if it supported Nokiaâ€™s theme system, featuring such â€˜coolâ€™ elements as leather wallpaper and category bars. Nokia has been promised wide freedom to customize Windows Phone 7 by Microsoft, so something like the above is certainly possible, especially if there is a big demand from Nokiaâ€™s Symbian constituent. Now I know everyone likes to customize their handset, but am I the only one who thinks this actually cheapens the Windows phone 7 experience?