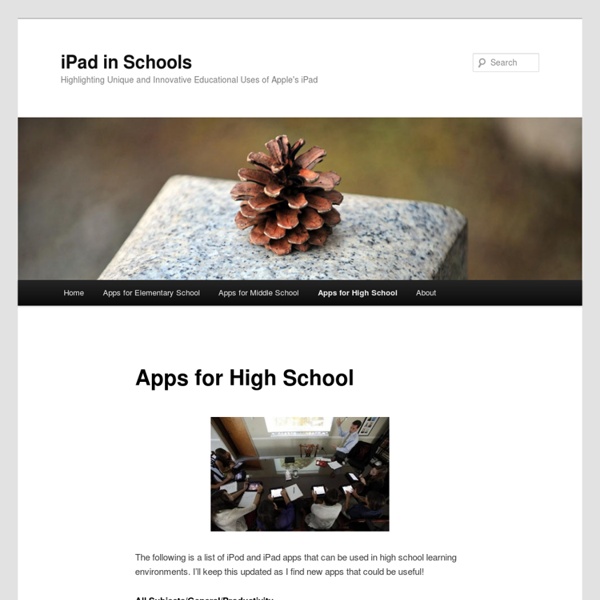 iOS 4.2 for iPad includes AirPrint One of the complaints that people have had with the iPad is the inability to print. A couple of weeks ago Apple released the first Developer Beta for iOS 4.2, allowing developers to get an idea of what iOS 4 is like on an iPad. Obviously the ability to multi-task will be welcomed by many iPad users however the update’s headline feature is wireless printing, which Apple has called “AirPrint”.

39 Sites For Using iPads in the Classroom Pages - Menu This Blog Linked From Here How to Use Green Screen Effects on iPads Making Movies Magical These days, very little comes out of Hollywood without special effects added in post-production. Our favorite superhero movies, science fiction thrillers and fast-paced action movies just wouldn't be the same without them. However, these video effects are no longer the preserve of video professionals. Medieval Math Battle game goes gold for iOS and Android We wrote about the Medieval Math Battle game in October: aimed at 9-12 year-olds, it turns maths into a monster-packed roleplaying game. And very fun it is too. That game was “freemium” – free to play, but using in-app purchases to unlock different sections (e.g. subtraction, multiplication and division) as well as buy virtual gold for upgrades. Now the game’s developer SpinFall has launched Medieval Math Battle Gold, which dumps the in-app purchases aspect: “All operators are unlocked, plus earn twice the gold after every battle” as its app store listing puts it.

Essential Apps for Teachers Here are all the direct links to my reviews for my Apps for Teachers: App #1: Music (free) App #2: Dropbox (free) App #3: Skitch for Evernote (free) App #4: Pick-Me ($.99) App #5: GoodReader ($4.99) Tips for Using iPads in the Classroom While for some teachers, iPads in the classroom are already a familiar part of everyday life, as of Pearson’s 2014 Student Mobile Device Survey, only 16% of students attended schools that provide tablets 1:1. For all the news stories and chatter in the educational industry about using iPads in education, many teachers haven’t gotten a good look at just what the technology can do for their students. But there’s reason to believe that could well change in coming years. The same Pearson report found that: 51% of students think their school should be providing them with tablets.89% say tablets make learning more fun.81% say using a tablet in the classroom allows them to learn in the way that’s best for them.71% believe tablets help students perform better in class. Image via flickr and Sean MacEntee

50 best Android apps for kids from 2013 Got a new Hudl, Galaxy Tab Kids, Nexus 7 or other Android tablet for your children? Our best Android apps for kids roundup from 2013 may be of help this Christmas. As the year went on, we covered more and more Android apps alongside this site’s original focus on iPhone and iPad, and that’s a trend that we think will continue in 2014, as more parents buy non-Apple tablets. For now, read our snapshot of top Android apps from 2013, and let us know any great ones you think we should have included by posting a comment! And if you’re more of an iPhone or iPad parent, check out our separate 100 Best iPhone and iPad Apps for Kids from 2013 feature. 64 Varied And Essential iPad Apps For Teachers 64 Varied And Essential iPad Apps For Teachers by TeachThought Staff What exactly makes an app “essential” is open to interpretation. For pure productivity, you could consider the direction of Google Drive, Skype, Zoom Notes, iAnnotate–maybe a gradebook app, Class Dojo, etc.

50 Fab Apps for Teachers Less Is More You don’t need a one-to-one classroom (one device for every student) to integrate tablets into instruction. Whether you have one tablet or five, possibilities for teaching with them abound. Single Tablet • Independent reading Load up your tablet with books in a reading app. Allow students to check out the tablet for the day or week for in-class use, just as they would a book from the class library. Have students sign a contract that they’ll handle the tablet properly.

Timeline Timeline allows students to create a graphical representation of an event or process by displaying items sequentially along a line. Timelines can be organized by time of day, date, or event, and the tool allows users to create a label with short or long descriptive text. Adding an image for each label makes a timeline more visually appealing. 60 iPad Productivity Apps For Modern Teachers 60 iPad Productivity Apps For Modern, Mobile Teachers by TeachThought Staff In the conversation around teacher quality and performance, crucially missing is the notion of time. Simply put: Teachers. Adaptive Web Design: Crafting Rich Experiences with Progressive Enhancement — Easy Readers The web is an ever-changing medium whose scope, application, audience and platform continue to grow on a daily basis. If you’ve worked on the web for any amount of time, you’ve likely heard or even used the term “progressive enhancement.” Since the term’s inception, it has been considered a best practice for approaching web design. But what is it really? And how do we reconcile its meaning with the rapid evolution of the languages and browsers we rely on to do our jobs?

15 Great Timeline Creation Web Tools and iPad Apps for Teachers and Students January 28, 2014 The possibilities for the use of timeline tools in the class are endless. Whether you want to teach salient historical incidents, chronological order of events, or explain a developmental process in biology or simply outline the major learning curves for the year, timeline creation tools are the ideal platforms to implement. A timeline is a visual representation that features information in connected sequences over a given period of time. Apps That Rise to the Top: Tested and Approved By Teachers Michelle Luhtala/Edshelf With the thousands of educational apps vying for the attention of busy teachers, it can be hard to sift for the gold. Michelle Luhtala, a savvy librarian from New Canaan High School in Connecticut has crowd-sourced the best, most extensive list of apps voted on by educators around the country.