Because Every Country Is the Best at Something — Information is Beautiful 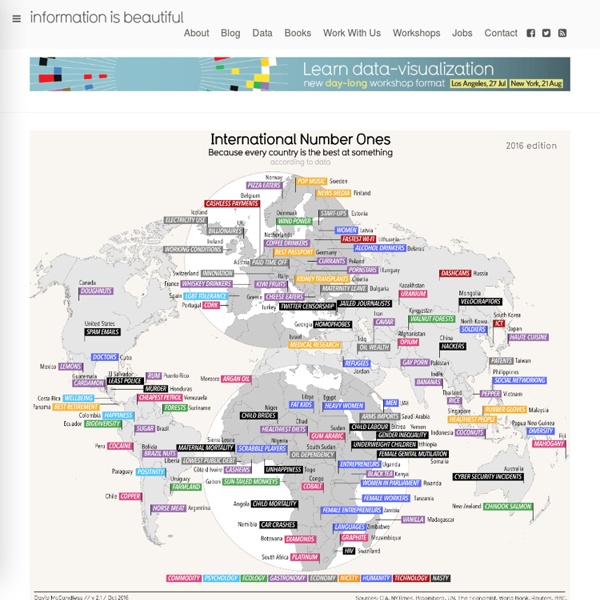 Related:  What the Hell • Infographics • CDM-culture

Google, democracy and the truth about internet search Here’s what you don’t want to do late on a Sunday night. You do not want to type seven letters into Google. That’s all I did. I typed: “a-r-e”. And then “j-e-w-s”. Since 2008, Google has attempted to predict what question you might be asking and offers you a choice. Support for ISIS in the Muslim World - Perceptions vs Reality According to a Brookings report from last January: 40% of Americans believe most Muslims oppose ISIS.14% think most Muslims support ISIS.And 44% (the plurality) of Americans believe Muslim views are evenly balanced on the issue. American perceptions of Muslims’ support for the Islamic State are all over the map. And you only have to search Google for “how many muslims support isis” to see why. The first result shows “81% of respondents support the Islamic State.” The second result, “Most dislike ISIS in Muslim countries

Can You Tell Fake News From Real? Study Finds Students Have 'Dismaying' Inability Stanford researchers assessed students from middle school to college and found they struggled to distinguish ads from articles, neutral sources from biased ones and fake accounts from real ones. Gary Waters/Ikon Images/Getty Images hide caption toggle caption

Books that will induce a mindfuck Here is the list of books that will officially induce mindfucks, sorted alphabetically by author. Those authors in bold have been recommended by one or more people as being generally mindfucking - any books listed under their names are particularly odd. You're welcome to /msg me to make an addition to this list. What The Rise of Immigrant Detention Means For Some of the Most Vulnerable People Seeking Refuge On Our Border click to enlarge Andrew J. Nilsen There's Big Money to Be Made in Asteroid Mining See the full version of the infographic. If humans were ever able to get their hands on just one asteroid, it would be a game-changer. That’s because the value of many asteroids are measured in the quintillions of dollars, which makes the market for Earth’s annual production of raw metals – about $660 billion per year – look paltry in comparison. The reality is that the Earth’s crust is saddled with uneconomic materials, while certain types of asteroids are almost pure metal. X-type asteroids, for example, are thought to be the remnants of large asteroids that were pulverized in collisions in which their dense, metallic cores got separated from the mantle. There is one such X-type asteroid near earth that is believed to hold more platinum than ever mined in human history.

How to Use a [BUSTED] Cell Phone to Meet 5 Basic Survival Needs Editor’s note: This is a guest post from Creek Stewart. Last week we talked about the many survival uses of the tampon. But unless he specifically packed one in a bag or car, a man’s unlikely to have one on him in a pinch. So today we’re going to explore the survival uses of an everyday item you’re much more likely to have with you in an emergency: your cell phone.

Facial photo-matching game that reverses racial bias in children 2 clicks In a recent study from Yale University, preschool teachers were found to spend more time watching African-American children, and especially boys, for signs of misbehavior, than they did children of other races. Sadly, this didn’t surprise anyone who knew it to be true from experience. What fewer of us realize, however, is that people of almost all races begin to show an implicit bias for their own race well before they enter preschool. Below you'll find a nifty infographic produced by the folks at Yellowbrick detailing the consequences of everyone's favorite irritating childrearing trend: helicopter parenting. We've written a lot about this topic here at Big Think; our archives are a veritable smorgasbord of pieces detailing its effects and consequences. Our focus isn't merely because we like to helicopter the helicopter parents, but because shifts in how we raise our kids have resulted in a generation of young adults who lack critical thinking, self-reliance, and coping skills. And that sucks not just for said young adults, but also for everyone else who has to deal with their problems.