Subliminal Messages - Hidden Subliminal Image Samples - Do you get the hidden subliminal message? 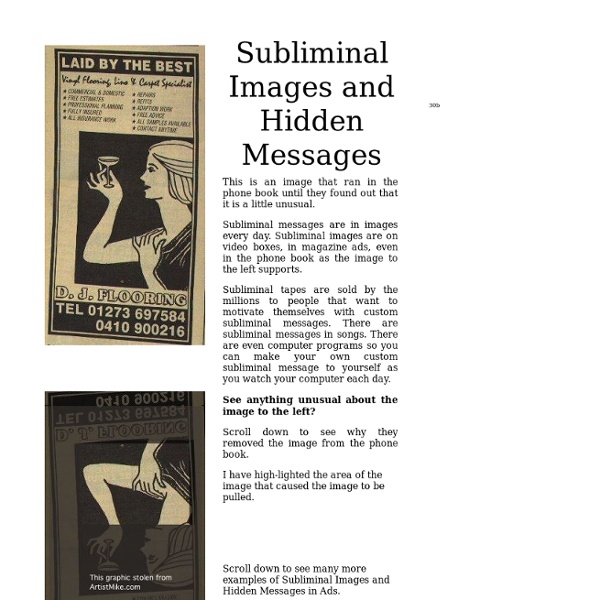 35 Great Social Media Infographics 35 Great Social Media Infographics [Note: I recently updated this compilation to include some more recent visualizations... you can see it here.] Here’s a collection of terrific social media infographics that might come in handy. As you probably know, infographics are visual representations of information, data, or knowledge. They illustrate information that would be unwieldy in text form and they act as a kind of visual shorthand, making information easy to understand and consume. They are driven by the same information as charts, but they’re often a better form of communication because of their pleasant aesthetics — charts and graphs can communicate data, but infographics turn data into information. It’s very helpful to use infographics in presentations, reports, articles, etc., to convey concepts. Most of these have been scaled down or cropped. If you know of any good ones that I’ve missed, please leave a comment and let me know! 1. 2. 10 Levels of Intimacy in Today’s Communication 3.

23 Tools To Brainwash and Influence People Through Media | Alterati ‘’till at last the child’s mind is these suggestions, and the sum of the suggestions is the child’s mind. And not the child’s mind only. The adult’s mind too all his life long. - Aldous Huxley, Brave New World The opinions and behaviors of people and societies are easily swayed. Now the power to rule the world and wag the cultural dog is at your fingertips. The 23 Tools: 1. 2. 3. 4. 5. 6. 7. 8. 9. 10. 11. 12. 13. 14. 15. 16. 17. 18. 19. 20. 21. 22. 23. By sticking to these simple premises you should be able to produce entire societies capable of ending world hunger, but too selfish to care. Devon White specializes in PR for the brain, promoting integrity, responsibility and conscious evolution through online video and lecture-performances on sex. As a trained hypnotist, video podcaster, writer and teacher, he supports broadcasting which goes beyond simple stimulus-response conditioning to engage the intentional, participatory and evolutionary functions of the brain. Like this:

19. Quest to Learn : Imagination: Creating the Future of Education & Work 19. Quest to Learn Video: Katie Salen discusses Quest 2 Learn in a six part series on Big Think. Katie Salen recognizes that play is a profound part of the human experience. Salen is a game designer, interactive designer, animator, and design educator. She is the co-author of “Rules of Play: Game Design Fundamentals,” a textbook on game design, as well as the “Game Design Reader.” On April 6, 2010, the Village Voice reported on Quest to Learn in “Game Theory: A city school explores the educational power of playing and designing games.” In the class “Sports for the Mind,” students build their own video games using a program called Gamestar Mechanic that was designed by Salen. “Sports for the Mind” teacher Al Doyle says his class helps students learn “systems thinking,” to understand the relationship of parts to wholes. Critic Diane Ravitch, an education historian and NYU professor, was cited in the article.

Clean Up Your Mess - A Guide to Visual Design for Everyone Kickstarter's Ultimate Success Story: Nano Wristbands Raise $1 Million | Co.Design It's the ultimate Kickstarter success story. Unable to secure a manufacturer, the Chicago-based designer Scott Wilson placed his TikTok and LunaTik wristbands -- which convert the Nano into a watch -- on the funding site. Within a month, he raised nearly $1 million from 13,500 backers -- a Kickstarter record. All of a sudden, retailers came calling, including the most prestigious of all: Apple, which is rolling out the wristbands in North American stores this week. "A lot of people just don't have the instincts to know whether it's going to sell, so they just don't want to gamble," Wilson says. 76% of Wilson's backers bought the Nano because of the watchband. The Kickstarter experiment proved them all wrong: Twice as many $79.95 LunaTiks, the bands with the premium aluminum case, were sold than the plastic $39.95 TikToks. As did another intriguing piece of data: In a survey sent to his backers, the designer asked, How many of you bought the Nano because of the watchband?

Talking Composition Autodesk Releases Free App That Brings 3-D Printing To The Masses [Video] | Co.Design If you hear "maker culture" and instantly think of grease-stained weirdos who drone on about steampunk and "screws not glue"... well, you wouldn't be wrong. But when a giant software company like Autodesk throws its weight behind "makers," you know it's much more than a subculture. "There was this huge digital content generation that emerged, but now that 'Generation C' is turning into 'M,' the Make generation," Tatjana Dzambazova, Senior Product Manager at Autodesk, tells Co.Design. 123D lets you easily fabricate objects, not just visualize them. 123D differs from other free 3-D modeling software like Google Sketchup in that it's designed to let you easily fabricate objects, not just visualize them. Because 123D has physical output in mind, it includes ingenious features like a "shell" command that turns any solid digital model hollow, which makes it much faster and cheaper print. Autodesk intends 123D to be simple enough to play with like a toy. [Download 123D for free here]

How To Create a Detailed Vector Sugar Skull Illustration Follow this Illustrator design tutorial to create a super detailed sugar skull illustration made from lots of sweet vector elements. We’ll use a mix of basic and advanced Illustrator tools to build various decorative objects to slowly build up the features until we have an awesome looking skull design that pays homage to the Mexican Dia de los Muertos tradition. View full size illustration Sugar skull originated as part of the festivities of the Mexican Day of the Dead (Dia de los Muertos) holiday. Let’s get started with out own vector sugar skull Illustration. Use the Pen tool to complete the outline of a skull by drawing a protruding cheek and jaw line. Align the duplicate to the opposite side of the skull, then merge all the objects together using the Pathfinder tool. Zoom in and tweak the outline where the two halves are joined. With the outline selected, go to Object > Path > Offset Path. Add a thick 6pt stroke to the inner outline and a 2pt stroke to the outer outline.

WeeNudge | Teach your clients about the mysteries of the web