President Map. Which Polls Fared Best (and Worst) in the 2012 Presidential Race. As Americans’ modes of communication change, the techniques that produce the most accurate polls seems to be changing as well. 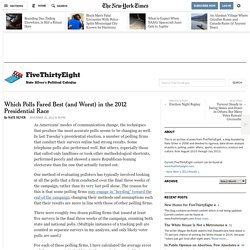 Mitt Romney, Class Warrior. When you think of class warfare, you probably think of inciting anger, resentment and jealousy among the have-nots against the haves. 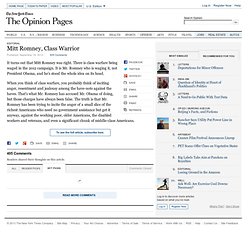 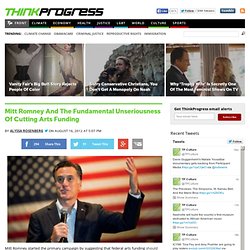 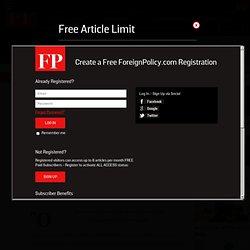 " No. U.S. President Barack Obama's $787 billion stimulus bill was certainly a political failure. Obama signed it during his first month in office, cutting taxes for more than 95 percent of American workers, while pouring cash into health care, education, energy, infrastructure, and aid to victims of the Great Recession. The Simpsons attacks Romney with Mr. Burns and Seamus the dog. (VIDEO) Back in September, we noted that the voting-booth goof The Simpsons used in a promo for its Halloween episode was a bit more politically pointed than the one they ran four years before, when Obama was pitted against McCain. 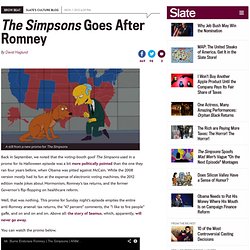 While the 2008 version mostly had its fun at the expense of electronic voting machines, the 2012 edition made jokes about Mormonism, Romney’s tax returns, and the former Governor’s flip-flopping on healthcare reform. Well, that was nothing. This promo for Sunday night’s episode empties the entire anti-Romney arsenal: tax returns, the “47 percent” comments, the “I like to fire people” gaffe, and on and on and on. Mutt Romney Blues by The New Yorker.

Mitt Romney paid taxes at a rate of at least 13 percent. And he’s proud to say so. Can we stand back and pause a short minute to take in the spectacle of a man who wants to be President of The United States, who wants us to seriously regard him as a paragon of the American civic ideal, declaiming proudly and in public that he has paid his taxes at a third of the rate normally associated with gentlemen of his economic benefit. 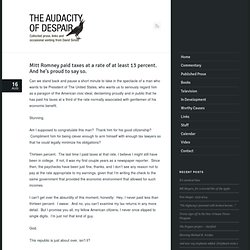 Stunning. Am I supposed to congratulate this man? Mitt Romney Tells 26,000 Americans They Didn’t Die. When he appeared on 60 Minutes in September, Mitt Romney shocked many Americans when he claimed that Americans do not die for a lack of insurance. 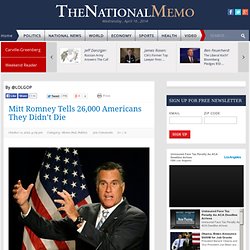 “Well, we do provide care for people who don’t have insurance. If someone has a heart attack, they don’t sit in their apartment and die.” Actually, at least 26,000 Americans die every year for lack of insurance, according to a study by the advocacy group Families USA. That number is up from a 2000 study that showed about 18,000 uninsured Americans die every year. Another study from Harvard University suggested that as many as 45,000 Americans die for a lack of health insurance a year. Now Romney—who is echoing George W. Racism Tinges Opposition To Obamacare. Last week, the GOP-dominated House of Representatives voted to repeal the Patient Protection and Affordable Care Act — or “Obamacare.” 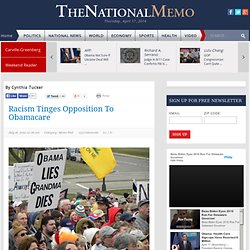 As expected, the vote fell largely along party lines. House Speaker John Boehner and his partisans knew perfectly well that the vote was political theater. In the very unlikely event that the Senate followed suit, President Obama would surely veto any effort to repeal his most significant achievement. It was the 33rd time the House has voted to repeal all or parts of the law, so Boehner’s minions are well-practiced at this tedious bit of drama. It plays well to the GOP electorate. 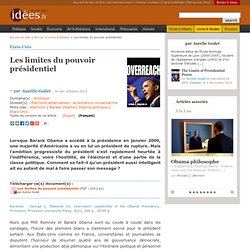 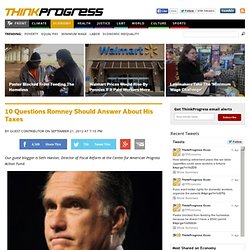 On Friday afternoon, the Romney campaign released the candidate’s 2011 tax return, which showed that he paid a tax rate of approximately 14 percent on more than $13 million of reported income. The Powerless Presidency. Last Friday’s press conference by Barack Obama marked the end of an era. It was March 1st, the day that the sequester was set to kick in, and the President had just come from a meeting with congressional leaders in the Oval Office. On the eve of previous fiscal deadlines, the White House and Congress often found a way to reach a deal, even if it was only a patchwork solution or a temporary fix. Not this time. A deal on the sequester was never really possible. Back in January, in return for agreeing to raise the debt ceiling for a few months, conservative House Republicans demanded that their leaders, John Boehner and Eric Cantor, allow the trillion dollars of cuts in the sequester to take effect. NBCNews.com video: Romney plays tax games with 2011 return. 'Surprise' Clint Eastwood Speech Features Bizarre Conversation.

Obama plays up love of beer to ferment coalition of the swilling. He sure seemed to be. Across Iowa over the past three days, Obama talked about wind power and drought relief and middle-class taxes. The Agenda. Oop.it. Open Prep: 15 Things to Read, See and Hear About Paul Ryan. Mitt Romney has chosen Wisconsin representative Paul Ryan for his vice presidential pick. Reihan Salam of the National Review will be discussing the pick on Monday's Brian Lehrer show. In the meantime, here's some background reading on Ryan. → Official Campaign Announcement: America's Comeback Team. 12 Things You Should Know About Vice Presidential Candidate Paul Ryan. By Igor Volsky on August 11, 2012 at 8:27 am "12 Things You Should Know About Vice Presidential Candidate Paul Ryan" Mitt Romney has picked as his running mate 42 year-old Republican Congressman Paul Ryan (R-WI), the architect of the GOP budget, which the New York Times has described as “the most extreme budget plan passed by a house of Congress in modern times.”

Below are 12 things you should know about Ryan and his policies: Progress Reports - ThinkProgress. New Rule Prohibits Voters In Miami-Dade County From Using The Restroom, No Matter How Long The Line Kathleen Sebelius’ Biggest Achievement Is The One No One Is Talking About This 32-Year-Old Florida Woman Is Dead Because Her State Refused To Expand Medicaid Thanks, Kathleen By CAP Action War Room on April 11, 2014 Department of Health and Human Services Secretary Kathleen Sebelius steps down after overseeing the largest expansion in health care in America in 50 years.

Obama, D'Souza and Anti-Colonialism. I’ve never before had the experience of seeing a movie based on the ideas of a friend who is also the film’s producer, writer, co-director and on-camera star. The friend is Dinesh D’Souza and the movie is “2016: Obama’s America.” It’s a bit less than 90 minutes long and for the most part it follows the path of D’Souza’s 2010 book “The Roots of Obama’s Rage.”

That path is at once psychological and historical.

Obama Photographer Souza on Documenting Presidency in Digital Era. The long view of history tends to be the judge of a presidency. As President Obama embarks on a second term in the Oval Office, it may still be too early to draw conclusions about his legacy as Commander in Chief. What we do know is that Obama’s first term has been a historic one: the first African American to hold the country’s highest office, Obama and his Administration have battled a recession, passed health care reform and legislation to end the military’s “Don’t ask, don’t tell” policy, formally ended the war in Iraq and brought Osama bin Laden to justice. ( Barack Obama, 2012′s Person of the Year) Through adversity and triumph, public victories and private setbacks, chief official White House photographer Pete Souza and his team of photographers have relentlessly documented the actions of the President, the First Lady and the Vice President since Obama took office in early 2009.

I Am Not Big Brother. Required reading for 2012 election: The best stories about the Obama and Romney contest. Now That's What I Call Gerrymandering! Americans woke up on November 7 having elected a Democratic president, expanded the Democratic majority in the Senate, and preserved the Republican majority in the House. Election Day in America - The Big Picture. Ballotpedia. Electoral Votes by State - For 2012. Democrats Lose Control of Wisconsin State Senate, Leaving Republicans With Full Control Again. Direct Democracy: Results of Ballot Propositions Across the Country.