It's Slave States vs. Free States in 2012. October 10, 2012 | Like this article? Join our email list: Stay up to date with the latest headlines via email. Every now and then someone highlights the overlap between today’s Republican states and the slave states of the former Confederacy. As clichéd as the point may be, it remains indispensable to understanding what is happening in American politics today: Confederate (red) and Union (blue) states Republican (red) and Democratic (blue) states, 2008 election The core of today’s Democratic party consists of the states of New England and the Great Lakes/Midatlantic region that were the heart of the Union effort during the Civil War.

Red and blue states, 2008, with states proportional to their number of electoral votes. Not Larry Sabato: Virginia GOP Caught Destroying Voter Registration Forms. On Monday I saw a really interesting story coming out of Harrisonburg on Facebook: "I just saw a guy throw a bag of trash in my cardboard dumpster and speed off. 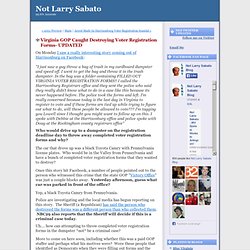 I went to get the bag and throw it in the trash dumpster. In the bag was a folder containing FILLED OUT VIRGINIA VOTER REGISTRATION FORMS!! I called the Harrisonburg Registrars office and they sent the police who said they really didn't know what to do in a case like this because its never happened before. The police took the forms and left. Who would drive up to a dumpster on the registration deadline day to throw away completed voter registration forms and why? The car that drove up was a black Toyota Camry with Pennsylvania license plates. Once this story hit Facebook, a number of people pointed out to the person who witnessed this crime that the state GOP "Victory Office" was just a couple blocks away. 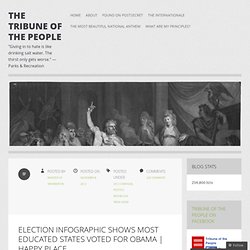 Welcome to all my new readers. Please feel free to follow this blog on Facebook or on Twitter. I also have two other Facebook pages if you are interested in the topics. - Restore the Glass-Steagall Act! And The Social Democratic and Labor Party I would also like to start a Social Democratic and Labor Party. Rachel Madow on Obama's Re-election. Oregon election worker fired for altering ballots to Republican straight ticket. Herald Argus > Archives > News > Local > Dem chair wants investigation into voter purge. Posted: Wednesday, October 24, 2012 12:00 am Dem chair wants investigation into voter purge By Matt FritzStaff writer1-866-362-2167 Ext. 13887mfritz@heraldargus.com Herald Argus | La PORTE COUNTY — The Democrat party chair is asking the federal government to get involved in the wrongful purge of 13,000 voters in La Porte County last year. 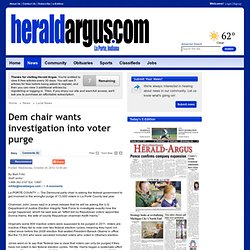 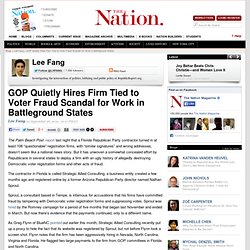 ‘Jim Crow’-Type Voter-Suppression Laws to Bar 10 Million Latinos from Voting, Study finds. By Neal Rodriguez | 09/24/2012 A new report released yesterday by the Advancement Project finds that voter suppression laws in 23 states have the potential of barring more than 10 million Latino United States citizens from voting in the 2012 elections. 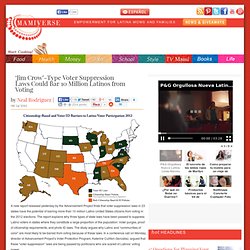 The report explains why three types of state laws have been passed to suppress Latino voters in states where they constitute a large proportion of the population: Voter purges, proof of citizenship requirements, and photo ID laws. The study argues why Latino and “communities of color” are most likely to be barred from voting because of these laws.

In a conference call on Monday, director of Advancement Project’s Voter Protection Program, Katerine Culliton-González, argued that these “voter-suppression” laws are being passed by politicians who are scared of Latinos’ voting power. The study argues why Latino and “communities of color” are most likely to be barred from voting. Read Related: Romney Says Hispanic Voters a Threat to the Nation. "Fuck You, Tyrants!": Ron Paul Supporters Rebel On Convention Floor. Chris Matthews destroys RNC chairman on live TV for playing race card. By David EdwardsMonday, August 27, 2012 9:56 EDT Republican National Committee Chairman Reince Priebus may have canceled the first day of the party’s convention due to weather, but he couldn’t evacuate in time to escape the wrath of Hurricane Chris. 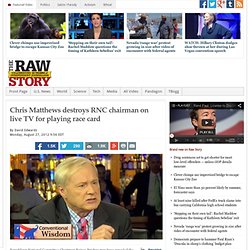 The party chairman found himself on Monday weathering a blistering rant from MSNBC host Chris Matthews about how Republicans were playing the “race card” with birther jokes and falsehoods about ending work requirements for welfare. “That cheap shot about ‘I don’t have a problem with my birth certificate’ was awful,” Matthews said of GOP hopeful Mitt Romney’s Friday embrace of the birther notion that President Barack Obama was not born in the U.S. Comment: Super PACs: Worse to Come. You’re nothing in Presidential politics this year without a Super PAC. 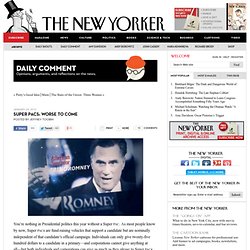 As most people know by now, Super PACs are fund-raising vehicles that support a candidate but are nominally independent of that candidate’s official campaign. Individuals can only give twenty-five hundred dollars to a candidate in a primary—and corporations cannot give anything at all—but both individuals and corporations can give as much as they please to Super PACs. Thanks to absence of those limits, in the South Carolina Republican primary, Super PACs spent about twice as much as the candidates themselves.

So far, it seems, the influence of Super PACs has been immense. Super PACs seem to deserve much of the credit for the fall and rise of Newt Gingrich’s Presidential campaign. This strange legal superstructure for our campaigns has come about largely because of Supreme Court decisions, especially the Citizens United case, from 2010. Through most of American history, there were no limits on campaign contributions.