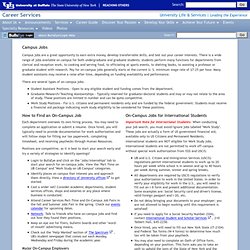 There is a wide range of jobs available on campus for both undergraduate and graduate students; students perform many functions for departments from clerical and reception work, to cooking and serving food, to officiating at sports events, to shelving books, to assisting a professor or graduate student with research. Pay for on-campus jobs generally starts at the current U.

S. minimum wage rate of $7.25 per hour. Many student assistants may receive a raise after time, depending on funding availability and performance. There are several types of on-campus jobs: Student Assistant Positions - Open to any eligible student and funding comes from the department.Graduate/Research/Teaching Assistantships - Typically reserved for graduate/doctoral students and may or may not relate to the area of study. How to Find an On-Campus Job Major On-Campus Employers UB and U.S. S.I. Newhouse School of Public Communications.

The Breakdown. The Decline of American Nationalism: Why We Love to Hate Kony 2012 - Max Fisher - International. The backlash against the misguided video campaign may say more about how American self-conceptions have changed in the last 10 years. 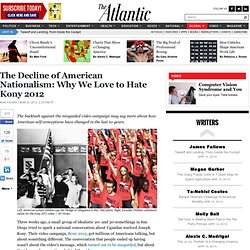 Left, American school children say the Pledge of Allegiance in this 1942 photo. Right, Invisible Children volunteers salute for the Kony 2012 video. / AP, Vimeo Three weeks ago, a small group of idealistic 20- and 30-somethings in San Diego tried to spark a national conversation about Ugandan warlord Joseph Kony. Their video campaign, Kony 2012, got millions of Americans talking, but about something different.

The conversation that people ended up having wasn't about the video's message, which turned out to be misguided, but about the ideas and assumptions behind the video. On news sites like this one, in newspapers, and even on TV, Americans have been grappling with concepts that normally don't get mentioned outside of a comparative literature class or liberal arts college symposium: neocolonialism, white man's burden, paternalism. Kony 2012. KONY 2012. Students react to Kony 2012 video.

The KONY 2012 campaign swept Facebook pages across the country in the past few weeks and timelines of many University students featured reposts of the video that went viral in one day. 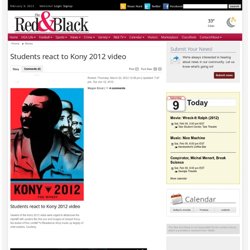 The night it was released, University freshman Jamie Tyberg created a Facebook group for the “Make Kony Famous” event that the video called for in cities across the country on April 20. Invisible Children co-founder and director of the documentary Jason Russell implored viewers to “cover the night” with posters and images of Joseph Kony, the leader of the Lord’s Resistance Army made up largely of child soldiers and that terrorized northern Uganda through 2007.

Critics have called out the organization for sensationalizing the situation in Northern Uganda and argue that the current Ugandan government also came into power through use of child soldiers, according to Michael Deibert's blog on the Huffington Post's website. She didn’t know that her group would reach more than 1,600 people. More student reactions. Criticism over KONY 2012 video continues as Ugandan women wish to forget the past. Any views expressed in this article are those of the author and not of Thomson Reuters Foundation. 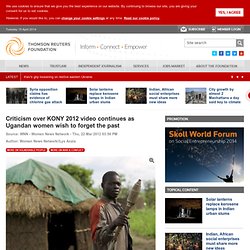 Women News Network (WNN) San Diego, CALIFORNIA: Amid harsh criticism stating that the makers of the viral video sensation about Joseph Kony and the child soldiers of Uganda, called ‘KONY 2012,’ is now considered the most viewed video ever. It has received attention from such diverse groups as NASDAQ, DailyKos, Al Jazeera TV, USA Today, Forbes and Doctors Without Borders. But among those who praise and those who cry foul about the video, a pounding criticism remains: Why is the organization that created KONY 2012 using information that some say is “outdated” to raise monies? The answers to these questions are complex. After what must seem like an ocean of critical remarks, Invisible Children’s CEO Keesey is not having an easy time his video about violence in Uganda, but he is stepping up in the largest way possible to explain some things to the public. The reason is simple. KONY 2012: Worthwhile Charity or White Man's Burden? The 30-minute documentary by advocacy group Invisible Children has over 76 million hits on YouTube. 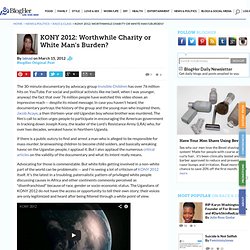 For social and political activists like me (well, when I was younger, anyway) the fact that over 76 million people have watched this video shows an impressive reach -- despite its mixed message. In case you haven’t heard, the documentary portrays the history of the group and the young man who inspired them, Jacob Acaye, a then thirteen-year old Ugandan boy whose brother was murdered. The film’s call to action urges people to participate in encouraging the American government in tracking down Joseph Kony, the leader of the Lord’s Resistance Army (LRA) who, for over two decades, wreaked havoc in Northern Uganda. If there is a public outcry to find and arrest a man who is alleged to be responsible for mass murder, brainwashing children to become child solders, and basically wreaking havoc on the Ugandan people, I applaud it. Advocating for those is commendable. Kingdom.” Kony 2012 Illustrates How Star Power Can Save the World.