Snack attack: 'Grazing' used to be king, but now experts say it slows metabolism, and can cause tooth decay and diabetes. By Simone Cave Updated: 08:09 GMT, 29 June 2010 For years, nutritionists have been telling us to graze - eat little and often - to keep up our energy levels and as a tactic to avoid overeating unhealthy food. 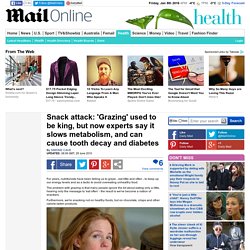 The problem with grazing is that many people ignore the bit about eating only a little, hearing only the message to 'eat often' - the result is we've become a nation of snackers. Furthermore, we're snacking not on healthy foods, but on chocolate, crisps and other calorie-laden products. Between meals: Experts now believe that we should go back to three meals a day, and cut out the snacks in between. (Posed by model) Clearly, eating lots of junk food is not good for the waistline. They say snacking makes us even more hungry; it also interferes with the body's ability to burn fat, leads to obesity and type 2 diabetes, as well as tooth decay. What we should really be doing, it seems, is going back to three proper meals a day, with no snacks in between. If you must... All You Need to Know About Carbs on a Low-Carb Ketogenic Diet. When it comes to ideal carbs intake, I've discussed it in my post here: How Many Carbs per Day on Low-Carb Ketogenic Diet? 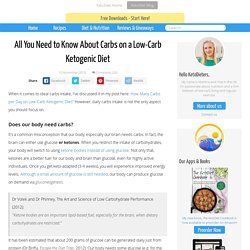 However, daily carbs intake is not the only aspect you should focus on. Does our body need carbs? It's a common misconception that our body, especially our brain needs carbs. In fact, the brain can either use glucose or ketones. When you restrict the intake of carbohydrates, your body will switch to using ketone bodies instead of using glucose. Dr Volek and Dr Phinney, The Art and Science of Low Carbohydrate Performance (2012):"Ketone bodies are an important lipid-based fuel, especially for the brain, when dietary carbohydrates are restricted.

" Ask The Macro Manager: Super-Low Carb Or Intermittent Fasting? Low-carb diets seem to be king of the hill at the moment, but I've been hearing a lot about intermittent fasting lately. 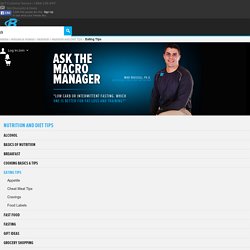 Which is a better fat-loss diet? This is a great question. The two approaches are more similar on a biochemical level than most people would think. Both are low-insulin diets, meaning they provoke a minimal insulin response from your body. Both also qualify as demanding diets, because they're in dead contrast with the way most people eat and can require a drastic change in eating habits and priorities. Let's break down the difference. How to get rid of cellulite on legs. The two most frequent topics we get asked about here at Metabolic Effect are belly fat and lower body fat (specifically What Causes Cellulite). 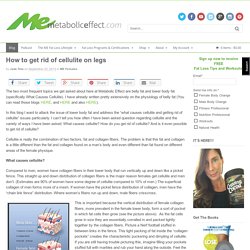 I have already written pretty extensively on the physiology of belly fat (You can read those blogs HERE, and HERE and also HERE). In this blog I want to attack the issue of lower body fat and address the “what causes cellulite and getting rid of cellulite” issues particularly. I can’t tell you how often I have been asked question regarding cellulite and the variety of ways I have been asked: What causes cellulite? 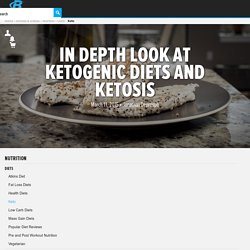 The metabolic state of ketosis simply means that the quantity of ketone bodies in the blood have reached higher-than-normal levels. When the body is in a ketogenic state, this means that lipid energy metabolism is intact. The body will start breaking down your own body fat to fuel the body's normal, everyday functions. What's So Great About Being In Ketosis? Establishing this metabolic state of ketosis even for a short period of time has many outstanding benefits. Benefit 1 The main benefit of ketosis is that it increases the body's ability to utilize fats for fuel, which gets very lazy on a high-carbohydrate diet.

Benefit 2 Ketosis has a protein-sparing effect, assuming that you are consuming adequate quantities of protein and calories—0.7 grams per pound of body weight per day—in the first place.1 Once in ketosis, the body actually prefers ketones to glucose. Benefit 3 Benefit 4 Where Is The Scientific Data? Keto Calculator - Learn Your Macros on the Ketogenic Diet.