Ask A Physicist To Speak At Your Funeral 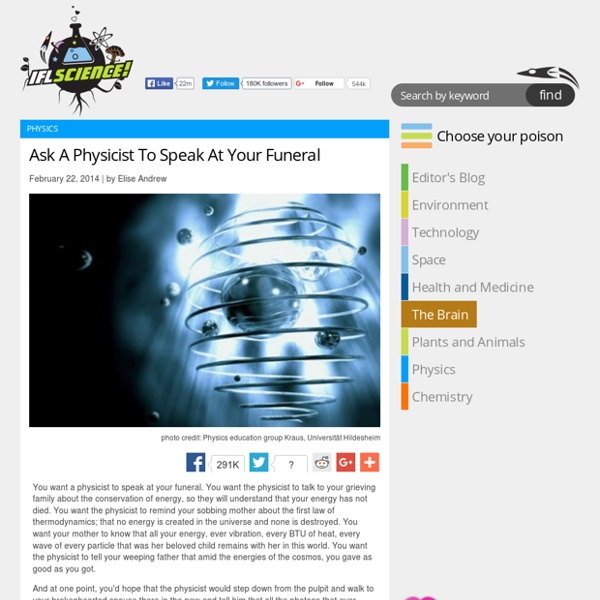 Kim's Counseling Corner - Childhood, Parenthood, and Everything In Between : Kim's Counseling Corner 1746 map of London now available as an incredibly detailed Google map The Centre for Metropolitan History and Museum of London Archaeology wanted a map that could help them visualise data from the 18th and 19th centuries. They started by taking John Rocque’s 1746 map of London, putting the 24 parts together, then georeferencing it. (For non-cartographers, georeferencing is “the process by which an electronic image of the earth is located on to the earth in the right place, so that the features it depicts overlie the same features shown on a current measured reality”.) The results were overlaid onto a Google map, and voila! You can travel through London as it was in 1746, and, as a added bonus, see the differences between then and now by moving the StreetView icon around. Example: in 1746, Southwark was mainly a giant field, but look at all the blue lines on top of it! The map is incredibly detailed — you can zoom in anywhere — and there are dozens of boats on the Thames, which is nice.

10 Japanese Travel Tips for Visiting America With the help of Google Translate (and an ability to interpret completely random sentence structure), an American can find out what kind of advice the Japanese give to their own countrymen on how to handle the peculiarities of American culture. Here are some things to look out for if you are visiting America from Japan. 1. There is a thing called “Dinner Plates.” In Japan, each person eating gets as many individual dishes as needed for the meal. 2. In Japan, hip hop clothes are considered stylish. 3. Manners with cars in America are really damn good. 4. In the U.S., they do not have a sense of superiority if they are able to drink a large amount. 5. In America, whether you are a student, working person, or housewife, you carefully make room for leisure time, weekdays and weekends. See Also: 4 Russian Travel Tips for Visiting America 6. If you put your bent middle and index fingers of both hands in the air, you are making finger quotation marks. 7. 8. Cashiers are slow. 9. 10. See Also:

Will humanity ever reach the stars? A Soyuz TMA-14M capsule is seen above the clouds as it descends beneath a parachute before landing southeast of Dzhezkazgan in central Kazakhstan in this March 12, 2015 picture provided by NASA. REUTERS/Bill Ingalls/NASA/Handout via Reuters It’s a bitter pill to swallow, but it’s starting to look as if Einstein might just have been right about that speed of light thing. From apparently superluminal radio sources in deep space, to the neutrinos that were supposed to be arriving ahead of schedule at the Grand Sasso experiment in Italy, every apparent exception to Einstein’s ultimate speed law has turned out to be a phantom. This is a particular blow if you happen to enjoy the galaxy-spanning fantasies of Star Trek, Star Wars and the like. But that doesn’t mean that interstellar travel is itself a fantasy. That said, any civilization willing to contemplate an interstellar expedition at close to the speed of light might also settle for something half as fast, or a quarter as fast.

Biologists can´t understand biology | Biology …at least not on their own. So, it´s already been over half a century since the humble proposition of Watson & Crick on the structure of DNA, (one of) the molecule(s) of life: a seminal discovery for the development of molecular biology that was to become arguably the most relevant discipline in last century´s life sciences. This century looks a bit different though. Having accumulated vast amounts of data on the basic biological principles, the ability to integrate and understand this knowledge is a major challenge. It might be true that the more we know about life, the more we realise about its complexity and thus, paradoxically, the further away we see ourselves from understanding it. In 2002, Yuri Lazebnik referred to this issue through his own research experience in a premonitory article entitled “Can a Biologist Fix a Radio? Initially, he imagined, several identical radios would be collected and compared with the broken one. And why is it that an engineer can fix the radio?

Inequality and the American Child by Joseph E. Stiglitz NEW YORK – Children, it has long been recognized, are a special group. They do not choose their parents, let alone the broader conditions into which they are born. They do not have the same abilities as adults to protect or care for themselves. That is why the League of Nations approved the Geneva Declaration on the Rights of the Child in 1924, and why the international community adopted the Convention on the Rights of the Child in 1989. Sadly, the United States is not living up to its obligations. In fact, it has not even ratified the Convention on the Rights of the Child. Though an average American childhood may not be the worst in the world, the disparity between the country’s wealth and the condition of its children is unparalleled. None of this is because Americans do not care about their children. As a result, America’s children have become worse off. These inequalities in outcomes are closely tied to inequalities in opportunities.

17 Easy Ways To Be Insanely Productive 5 Surprising Ways Your Language Affects How You Think #2. Your Views Change With the Language You Use to Voice Them daboost/Photos.com Most of us took a second language in high school, then promptly forgot everything we learned in favor of bong-making methodology and Led Zeppelin lyrics. maltaguy1/Photos.comCertain foreign prisons go extra hard on you if you know only English. Recent studies have suggested that language may act as a cue to which cultural frame of reference a given interaction belongs in. For example: A test was applied to bilingual Arab Israelis who spoke both Arabic and Hebrew (two cultures that have famously held a little animosity toward each other over the years) that asked participants to record whether words had negative or positive connotations. University of MinnesotaBut fail the test in multiple languages? We can only assume about the finger snaps and sassy head wobble that accompanied the latter statement. #1. agsandrew/Photos.com Consider the tenses past, present, and future. No? Huh.

Get Lost in This Stunning Drone Footage From Antarctica Kalle Ljung’s Antarctica video looks like it was filmed with a helicopter and wildly expensive gyro-stabilized camera. But the photographer used a consumer drone and GoPro to create a majestic piece of cinematography that makes you see the antarctic anew. “I really tried to capture the big picture of what it was like down there,” the Swede says. “I wanted to show the beauty but also the loneliness.” Ljung, a photographer and gearhead, initially visited Antarctica with his 73-year-old father, who is spending three years sailing around the world. He used a 3-axis H3-3D gimbal to create the glorious footage and had a monitor attached to his controller that showed a live view from the GoPro HERO3+ Black Edition. The drone captured sweeping shots of the arctic landscape, full of mountainous glaciers and shifting shades of blue. Ljung doesn’t plan to return to Antarctica, but his dad is sailing toward Tahiti before continuing west.

Where Do New Ideas Come From? In 1887, after achieving great fame and fortune for his invention of the phonograph, a machine that recorded sound, the acoustic telegraph, which transmitted more than one message at a time, and commercially viable light bulbs, Thomas Edison built a laboratory in West Orange, New Jersey. He recruited a team of talented scientists and engineers to help him further develop his famous inventions and, of course, to come up with new ones. Edison’s team there invented a cotton picker, a snow compactor, and a way of using magnetized iron to generate electricity. But probably the most famous device to emerge from that lab was the kinetoscope, a machine for viewing motion pictures. How, exactly, the engineers designed this machine, and how much of the credit should be given to one of Edison’s assistants, William Kennedy Laurie Dickson, are fascinating stories. But as a writer who constantly struggles to come up with something new, I’m more interested in the machine’s origin story.