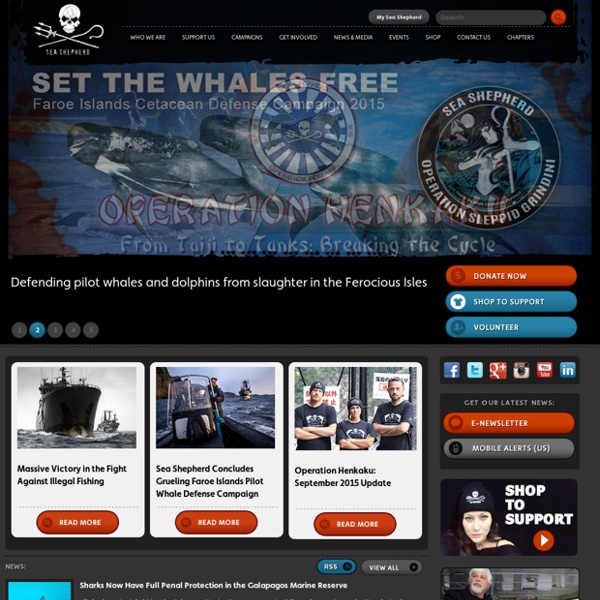 March 17, 2014 From the Cove to Captivity Contest - Megan Rose Taylor March 14, 2014 With global shark populations being driven towards extinction, this is not just a China issue, but a global issue and we are all responsible. August 29, 2013 Clive Standen, star of History Channel's "Vikings", speaks out against the continued barbaric slaughter of pilot whales and dolphins in the Faroe Islands

EARTHWORKS Earthworks' Mission Earthworks is a nonprofit organization dedicated to protecting communities and the environment from the adverse impacts of mineral and energy development while promoting sustainable solutions. Earthworks stands for clean air, water and land, healthy communities, and corporate accountability. Earth's Oceans Advertisement. EnchantedLearning.com is a user-supported site. As a bonus, site members have access to a banner-ad-free version of the site, with print-friendly pages.Click here to learn more. TEDxSF - Little TED Just Like The Big TED Posted by Tom Foremski - November 18, 2009 I popped into the TEDxSF conference yesterday at the Academy of Sciences in Golden Gate Park and really enjoyed the presentations. I've never been to the big TED conference but I've seen many videos and this was just like it. Conference is probably not the right word to describe TEDxSF it is more like attending a series of theatrical performances.

Earth's Oceans: Tides Tides are periodic rises and falls of large bodies of water. Tides are caused by the gravitational interaction between the Earth and the Moon. The gravitational attraction of the moon causes the oceans to bulge out in the direction of the moon. Another bulge occurs on the opposite side, since the Earth is also being pulled toward the moon (and away from the water on the far side). Earth GLOBAL CLIMATE CHANGE from JPL Your planet is changing. We're on it. American Academy of Pediatrics Cuts Ties with Monsanto Months ago Mamavation learned that the American Academy of Pediatrics was in a sponsorship relationship with Monsanto, a chemical company and makers of DDT, PCBs, Agent Orange, glyphosate & GMOs. In fact, Monsanto has been deemed the 3rd most hated company in the United States by the Harris Poll this year measuring “reputation quotient” which basically means how people feel about them. Baffled by this relationship, Mamavation founder Leah Segedie contacted the AAP through a close friend and colleague and was put in touch with their Public Affairs team.

Sea Anemones As of July 1, 2013 ThinkQuest has been discontinued. We would like to thank everyone for being a part of the ThinkQuest global community: Students - For your limitless creativity and innovation, which inspires us all. Teachers - For your passion in guiding students on their quest. Partners - For your unwavering support and evangelism. Julieanne Wurm More About Me I'm passionate about Designing inspiring learning experiences. Asking questions. Travel. Leaf Experiments Leaf cells have a special feature: pigment-containing chloroplasts in certain cells that enable them to produce energy and their own food through photosynthesis. What does that mean? Well, the chloroplasts within a cell contain different pigments, which are what gives a leaf its color. Green chlorophyll is the most common type of pigment, but there are also xanthophylls (yellow), cartenoids (yellow, orange), and anthocyanins (red).

Extreme Weather Photo Contest Winners Thank you to everyone who submitted photos to the first installment of our GPM Extreme Weather Photo Competition. We loved all of your entries and thoroughly appreciate your participation! The GPM Photo Competition Committee is happy to announce our top 5 picks. We’ll be sending the submitters NASA bags and GPM stickers. Please stay tuned for additional contests and activities.