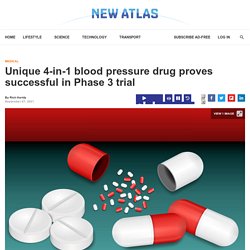 The results indicate the novel strategy is significantly more effective than any single high blood pressure treatment. For many patients suffering high blood pressure, early treatment can frustratingly involve lots of trial and error as they and their doctor try and home in on the most effective drug to treat their condition.

Many guidelines for treating hypertension have already shifted to recommending new patients start on two blood pressure drugs instead of one. Another treatment option being investigated is offering new patients multi-drug therapies involving combined low-doses of several hypertension drugs. A large 2018 trial tested a triple-combination therapy and found it significantly more successful than conventional treatment. Source: University of Sydney. Link between bad sleep, high blood pressure, and gut microbiome uncovered. A compelling new study, led by researchers from the University of Illinois at Chicago, has identified a complex relationship between disturbed sleep patterns, elevated blood pressure, and disruptions to the gut microbiome.

The robust animal study suggests these three factors influence each other in a bidirectional fashion, and the findings could point to novel treatments mitigating the negative health effects of poor sleep. While there currently is a large volume of ongoing research investigating the broad systemic influence of the gut microbiome on general health, the causal direction underpinning many of these relationships is still unclear. Hypertension, for example, has been associated with an imbalance in gut microbial populations. On the other hand, chronic sleep disruptions have also been linked with increased blood pressure and heightened risk of cardiovascular disease. Mote Marine Laboratory & Aquarium. How can I find out what current red tide conditions are? 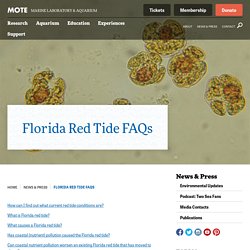 What is Florida red tide? What causes a Florida red tide? A boy’s basketball-size tumor is slowly suffocating him. Doctors will attempt a risky removal. Surgeons to remove 10-pound tumor from teen's jaw Noel Zayas paraded his son to a never-ending carousel of Cuban doctors, but none of them would touch the boy. 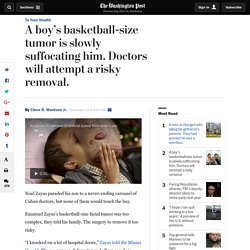 Scientists identify unique "breathprint" of 17 diseases. A team of international researchers recently unveiled a nano array that can identify the chemical signatures of 17 different diseases, possibly bringing us closer to the day when doctors might be able to use a medical tricorder a la Star Trek to instantly diagnose a patient's conditions. 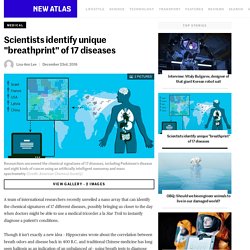 Though it isn't exactly a new idea – Hippocrates wrote about the correlation between breath odors and disease back in 400 B.C. and traditional Chinese medicine has long seen halitosis as an indication of an unbalanced qi – using breath tests to diagnose and monitor bodily disorders and disease is a research field that has been gaining momentum in recent years. And for good reason too. It would be the ultimate diagnostic test – potentially inexpensive and painless (not to mention a godsend for anyone with a fear of needles), and it would be able to deliver results fairly quickly too. Neanderthals may have given us their genital warts. Gee, thanks. Theconversation. Striking evidence has emerged that an ancient virus previously known only from fossil evidence has persistently infected some humans at very low levels for hundreds of thousands or even millions of years. 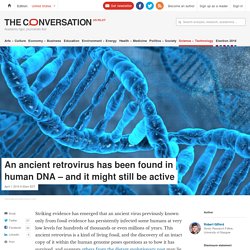 This ancient retrovirus is a kind of living fossil, and the discovery of an intact copy of it within the human genome poses questions as to how it has survived, and suggests others from the distant evolutionary past may lie dormant in the DNA of many species. Theconversation. Imagine that pesky tabby cat has been pooing in your backyard again. 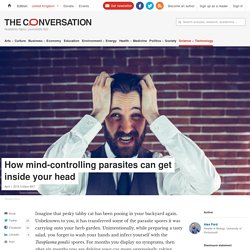 Unbeknown to you, it has transferred some of the parasite spores it was carrying onto your herb garden. Unintentionally, while preparing a tasty salad, you forget to wash your hands and infect yourself with the Toxoplasma gondii spores. For months you display no symptoms, then after six months you are driving your car more aggressively, taking chances in road junctions and generally filled with more road rage as you angrily gesticulate with fellow drivers. Could all this be linked to that tasty salad? The Guide to the Chilies of Mexico. Chile varieties represent an infinite universe—a book unto themselves. 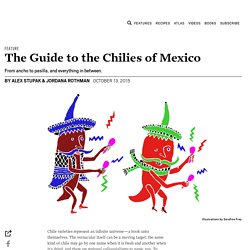 10 Worst Cities to Have Sex in: US Cities With Most Cases of Gonorrhea, Chlamydia, and Syphilis. Tourism boards love to brag about how great their cities are, whether they're the choicest foodie destinations or the best places to start a career. 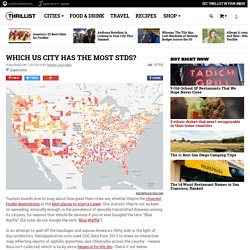 One statistic they're not as keen on spreading, ironically enough, is the prevalence of sexually-transmitted diseases among its citizens, for reasons that should be obvious if you've ever Googled the term "Blue Waffle. " (Ed note: do not Google the term "Blue Waffle. ") In an attempt to peel off the bandages and expose America's filthy side to the light of day/antibiotics, RentApplication.com used CDC data from 2013 to make an interactive map reflecting reports of syphilis, gonorrhea, and chlamydia across the country -- herpes data isn't collected, which is lucky since herpes is for life, bro.

Check it out below: Boosting estrogen, only in the brain. Researchers have developed a chemical that transforms into a powerful hormone once inside a rat — but only in the brain, not the body. 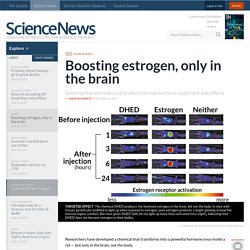 A protein in rats’ brains turns a chemical nicknamed DHED into the hormone estrogen, scientists report July 22 in Science Translational Medicine. This targeted treatment could provide estrogen to the brain and avoid potentially dangerous side effects in the body, the researchers say. “This is an interesting breakthrough,” says neuroendocrinologist Bruce McEwen of the Rockefeller University in New York City. The idea of treatments that affect the brain but not the body, or the body but not the brain, could be useful in treating a number of conditions, including cancer, he says.

VirScan provides complete viral history from a drop of blood. A new test developed by the Howard Hughes Medical Institute (HHMI) can test for both past and current infections by analyzing a single drop of patient blood. The researchers consider the method superior to existing techniques, which only search for a single virus at a time. The method, know as VirScan (Systematic viral epitope scanning), provides an unbiased approach to patient testing.

The technique works by screening blood samples for antibodies that fight against any of the 206 virus species that infect humans, and since the body continues to produces those antibodies for many years, it is able to detect both current and past infections. To target virus cells in the bloodstream, antibodies search for features in peptides on the surface of the virus, known as epitopes. Fatal Brain Disease in US Man Likely Came from UK Beef. A U.S. man who developed a rare and fatal brain disease likely got the disease from eating beef while living abroad more than a decade earlier, according to a new report of the case. The man, who was in his 40s when he first got sick, died in Texas in May 2014. Because the condition, known as variant Creutzfeldt-Jakob disease, is so rare, the man was misdiagnosed and even hospitalized for psychiatric symptoms multiple times before doctors suspected the true cause of his symptoms, according to the report from researchers at the Centers for Disease Control and Prevention and Baylor College of Medicine.

Variant Creutzfeldt-Jakob disease is thought to arise from eating beef contaminated with infectious prions, which are proteins that fold abnormally and form lesions in the brain. Meet the ‘living dead’: Forensic scientists’ new weapon. In the seconds after you breathe your last breath, the living dead take over. Now that your blood no longer flows, oxygen levels within your body plummet and degrading chemical processes start up, making your tissues more acidic. Some of your bacterial inhabitants relish the change and flourish, while others die off.

Man With Serious Mental Illness Committed To City Bus. ALBANY, NY—Citing a range of severe symptoms including hallucinations, disorientation, and disorganized speech, the Albany County Department of Mental Health said Wednesday that local man Shawn Zellicoff will be involuntarily committed to the 125 Clinton/Sand Creek city bus until further notice. “For his own safety, Mr. What the Color of Your Snot Really Means. Experimental treatment could target individual cells deep inside the body. A new experimental, non-invasive medical technique is promising to precisely deliver drug-carrying metal nanorods anywhere inside the body and image tissue with cellular resolution. If perfected, the approach could be used to treat inoperable deep-tissue tumors, brain trauma, and vascular or degenerative diseases. Jealous and fretful women are more prone to developing Alzheimer’s. The man who grew eyes. French hospital to open wine bar for terminally ill patients. Brain implant and high-tech sleeve used to bypass spinal cord and move paralyzed limbs.

Drunk without alcohol pill? Controversial pill gets you drunk without a hangover - Jacksonville Top News. Hair, bone and soft tissue regrown in mice by enhancing cell metabolism. New Artificial Blood Made In Transylvania, Could Lead To ‘Instant Blood’ Doctors Mix With Water. Synthetic mussel adhesive sticks to anything. Dressing Up For the Reaper: How Embalming Makes the Dead Look Alive.

Top Doctors Discuss The Art And Craft Of Surgery.