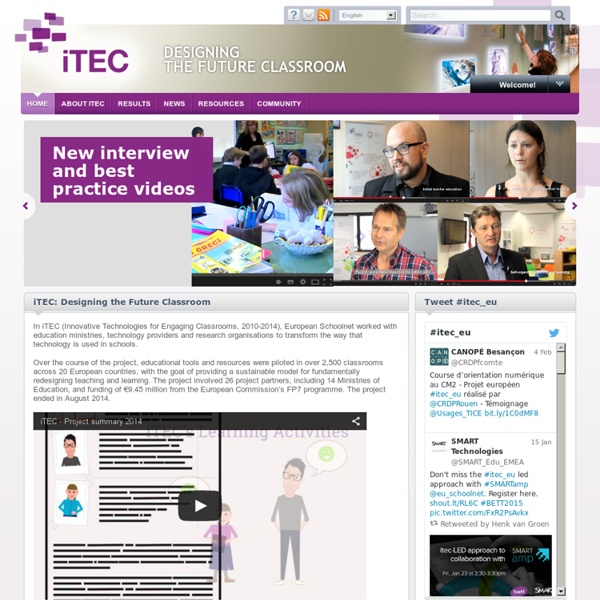 In iTEC (Innovative Technologies for Engaging Classrooms, 2010-2014), European Schoolnet worked with education ministries, technology providers and research organisations to transform the way that technology is used in schools. Over the course of the project, educational tools and resources were piloted in over 2,500 classrooms across 20 European countries, with the goal of providing a sustainable model for fundamentally redesigning teaching and learning. The project involved 26 project partners, including 14 Ministries of Education, and funding of €9.45 million from the European Commission’s FP7 programme. The project ended in August 2014. Read more: Project summary | Evaluation results

197 Educational YouTube Channels You Should Know About 197 Educational YouTube Channels You Should Know About If you don’t have a YouTube channel as an education provider, there’s a good chance you’re behind the times. Nearly every major educational institution in the world now hosts its own collection of videos featuring news, lectures, tutorials, and open courseware. Just as many individuals have their own channel, curating their expertise in a series of broadcasted lessons. These channels allow instructors to share information and blend media in unprecedented and exciting new ways. From teaching Mandarin Chinese to busting myths about Astronomy, the educational possibilities are virtually endless pun intended! Because we can now sift through thousands of resources while navigating a single repository, the potential for inspiration and growth in the field of education has reached a new height.

Rethinking Whole Class Discussion Whole class discussions are, after lecture, the second most frequently used teaching strategy, one mandated by the Common Core State Standards because of its many rewards: increased perspective-taking, understanding, empathy, and higher-order thinking, among others. These benefits, however, do not manifest without a skillful and knowledgeable facilitator. Unfortunately, a preponderance of evidence demonstrates that many teachers mistakenly conflate discussion with recitation. "Typical teacher-student discourse resembles a quiz show, with teachers asking a question, the student replying, and the teacher evaluating the student's response.

Microsoft Educator Network - For educators : Overview Connect and interact Connect with educators around the world. Bloom's taxonomy Bloom's wheel, according to the Bloom's verbs and matching assessment types. The verbs are intended to be feasible and measurable. Bloom's taxonomy is a classification of learning objectives within education. It is named for Benjamin Bloom, who chaired the committee of educators that devised the taxonomy, and who also edited the first volume of the standard text, Taxonomy of Educational Objectives: The Classification of Educational Goals. Bloom's taxonomy refers to a classification of the different objectives that educators set for students (learning objectives). It divides educational objectives into three "domains": cognitive, affective, and psychomotor (sometimes loosely described as "knowing/head", "feeling/heart" and "doing/hands" respectively).

P.K. Yonge Developmental Research School - About P.K.Yonge In order to enact the school's mission, P.K. Yonge requires a student population that approximates the demographic composition of the student age population of the State as a whole. The Admissions policy of P.K. Yonge is established with this goal as the objective. How Teachers Learn While some maintain that reluctance to use new technologies is simply rooted in a lack of skill and confidence, there is evidence from Becker and Fullan that teachers need to be recruited. They must be convinced of the value of the new activities and then given ample time to work on teams to invent effective lessons. In many schools, teachers are isolated from each other and preoccupied with what Fullan calls "the daily press" of getting through their schedule, focused according to Becker on state standards. Quite a few of these teachers are likely to cling to routines they have enjoyed in the past until they are equipped and encouraged to find, invent and test new routines that are suitable and reliable replacements. This creative exploration, invention and testing will require a change in schools that breaks down isolation, facilitates the work of teams and provides ample time for program development. Effective Strategies and Projects

Inset is dead! Long live Inset! Inset days are often criticised, with both teachers and parents finding them an annoyance. Jane Basnett, Downe House’s head of Modern Foreign Languages, tells us why Inset days need to be remoulded into something worthwhile. September: So, the lovely, long, hot summer is over. Well, maybe not so hot, but lovely and long anyway. You have rested, recuperated and regrouped.

Katherine R. Smith Elementary School: Home Page New Tech Network Selected Katherine Smith Elementary School as one of Nine National Filming Sites San Jose, CA (December 10, 2014) – New Tech Network (NTN) announced today that Katherine Smith Elementary was selected as a national filming site for instructional videos. The elementary school epitomized excellent instructional practi... Continue 11 Great YouTube Channels for Teachers September 11, 2014 YouTube is undoubtedly one of the most popular video hosting platforms in history. The stats released by its administration a few months ago are just mind blowing. With more than 1 billion monthly visitors and over 6 billion hours of video being watched each month (which equals almost an hour for every person on Earth) and an average of 100 hours of video uploaded every minute, YouTube sets a record of being the first audio visual media with the largest reach ever. As such, YouTube is definitely a treasure trove for us in education.

Differentiated Instruction, Understanding by Design and Universal Design for Learning: A stable planning approach This page was originally authored by James Hanson and Adi Aharon (2008). Revised by Cristin McKay (2009). Laura Bonnor revised and combined this page with UDL, a page that was originally authored by Jody Onuma (2007) and further edited by Camille Maydonik(2009,)in(2011). Sandra Magnussen added visual artifact (2015). [1] ETEC 510 Wiki Motion Artifact About Us - Information TES Connect pledges that our members can download and share user-generated resources free of charge for ever. We are committed to protecting the privacy of our members' personal data and promise never to sell or share it with any third party. The TES story is an extraordinary one: its digital community is one of the fastest growing of any profession globally, and it boasts a 100-year heritage at the centre of teaching and the education community. Today, with more than 3.2 million registered online users in over 276 countries and territories , TES is the world’s largest online network of teachers. More than 4 million resources are downloaded from the TES websites a week, with ten TES resources downloaded a second.

Quest to Learn Designed from the ground up by a team of teachers and game designers, and firmly grounded in over thirty years of learning research, Quest to Learn re-imagines school as one node in an ecology of learning that extends beyond the four walls of an institution and engages kids in ways that are exciting, empowering and culturally relevant. Quest to Learn’s unique standards-based integrated curriculum mimics the action and design principles of games by generating a compelling “need to know” in the classroom. Each trimester students encounter a series of increasingly complex, narrative challenges, games or quests, where learning, knowledge sharing, feedback, reflection and next steps emerge as a natural function of play. For instance, in the integrated science and math learning domain, “The Way Things Work,” over the course of one trimester, sixth graders help a shrunken mad scientist, lost inside the human body, navigate the systems he encounters and report back to his research lab.