Introduction to Literary Theory. This page is brought to you by the OWL at Purdue University. 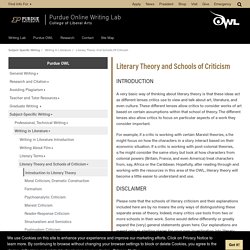 When printing this page, you must include the entire legal notice. Copyright ©1995-2018 by The Writing Lab & The OWL at Purdue and Purdue University. All rights reserved. (12) Guía básica del lenguaje cinematográfico. Want to Make a Lie Seem True? Say It Again. And Again. And Again. Volume 11 (2018): Issue 1 (Mar 2018): Spanish Comics, Part I : European Comic Art. Why Spain had to overlook its painful history - Charlemagne. Un país cada vez más feminista. Fruit, veg and family life – why Spaniards are living longer. The Mercado de Maravillas lives up to its name. 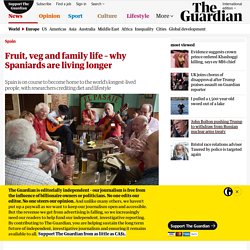 Should you ever find yourself in Madrid and desperate to buy half a kilo of pigs’ ears, a pair of fluffy slippers, a whole beef heart, a poncho, a jar of Peruvian chilli sauce and a bottle of good, strong bleach all under one roof, the stallholders of the Market of Wonders will be happy to oblige. Its most life-enhancing marvels, however, may lie in the piles of neatly stacked fruit and vegetables, the bags of nuts and in the treasuries of fish reclining, dead-eyed but odourless, on beds of ice. Markets such as the Mercado de Maravillas – which have long flourished across Spain – could be one of the main reasons why Spaniards are on course to overtake the Japanese to become the longest-lived people in the world.

How tourism is killing Barcelona – a photo essay. It’s 9am on a hot August morning and timed tickets to visit Barcelona’s emblematic Sagrada Família basilica have already sold out. 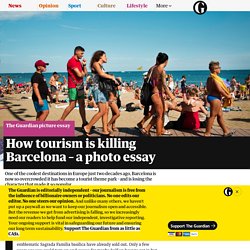 Only a few years ago you could turn up and queue for maybe half an hour to get in but with the soaring numbers of visitors to the city (around 30 million last year) anyone who arrives on spec is likely to be disappointed. Those who have tickets amuse themselves in the queue by taking selfies in front of the temple’s ornate nativity facade. Groups of tourists trail behind their lollipop-waving guides. Street vendors spread out their wares on the pavement – pirated designer sunglasses and tacky memorabilia - until a heavily-armed police patrol moves them on. At the stalls around the square you can buy soft toys, Gaudí ashtrays and Barça scarves. "Es un engaño que el trabajo asalariado sea la clave para liberar a las mujeres" □□ Unrest in Barcelona as Catalan separatists and police clash. Whose Side Are Asian-Americans On? This deep investment is evident in the numbers: In addition to dominating Stuyvesant, Asians comprise 62 percent of the student body at Bronx Science, and 61 percent at Brooklyn Tech. 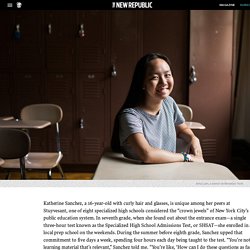 New York City’s public school population itself is 16 percent Asian. (White students are also overrepresented, garnering 27 percent of offers to specialized high schools this year, despite the fact that they make up 15 percent of the city’s students.) Their outsized presence makes them wary of change, particularly since de Blasio didn’t offer Asian-American communities any kind of recompense for a proposal that would disproportionately affect them. They would just have to take the hit. Asian-American community groups were blindsided by the mayor, whose office failed to consult them before the proposal went public. It didn’t help that it was easy to read de Blasio’s announcement as a cynical political move.

Crying in H Mart. Ever since my mom died, I cry in H Mart. 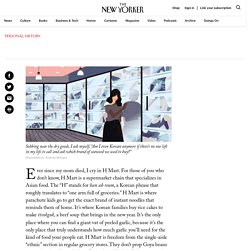 For those of you who don’t know, H Mart is a supermarket chain that specializes in Asian food. The “H” stands for han ah reum, a Korean phrase that roughly translates to “one arm full of groceries.” H Mart is where parachute kids go to get the exact brand of instant noodles that reminds them of home. 'Lies My Teacher Told Me' and America's Post-Truth Era. 9 novelas sobre la clase obrera. La narrativa de ficción, como la literatura y el arte en general, se contamina del entorno social en la que se produce. 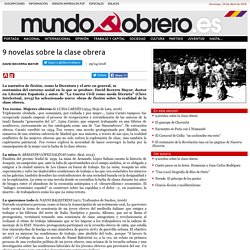 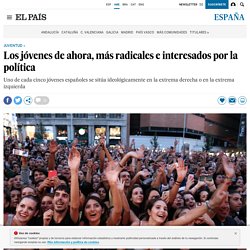 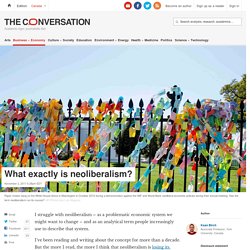 I’ve been reading and writing about the concept for more than a decade. But the more I read, the more I think that neoliberalism is losing its analytical edge. Students are Better Off without a Laptop in the Classroom. As recent high school graduates prepare for their migration to college in the fall, one item is sure to top most students’ shopping wish lists: a laptop computer. 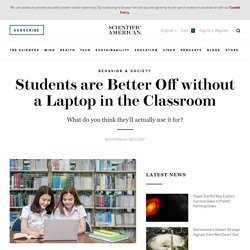 Laptops are ubiquitous on university campuses, and are viewed by most students as absolute must-have items, right alongside laundry detergent, towels, and coffee pots. Without question, personal laptops can enhance the college experience by facilitating engagement with online course material, providing access to sources for research, maximizing internship searches, and even improving communication with friends and parents. Many students also opt to bring their laptops to class so that they can take notes, view online lecture slides, and search the web for course-related material.

Homelessness in Spain Is on the Rise, and Owners Are Getting Rough as They Try to Get Squatters Out. Veronica and her three small children live in a modernist building in a quiet, working-class Barcelona neighborhood. 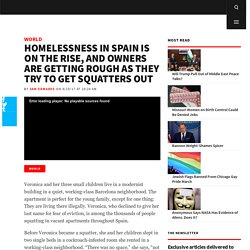 The apartment is perfect for the young family, except for one thing: They are living there illegally. Veronica, who declined to give her last name for fear of eviction, is among the thousands of people squatting in vacant apartments throughout Spain. La viñeta reivindicativa y comprometida, en el Salón del Cómic. Radio, Redefined. Decades after fighting fascism, historians help Americans confront its resurgence. Eighty years after the first Americans went to war against Nazi-backed fascists, a small group of historians trying to preserve the volunteers’ memory has found their services unexpectedly in demand. “Why are people puzzled over the meaning of that word, fascism?”

Asked Peter Carroll, a historian of the Spanish civil war at Stanford University. “Do I think Donald Trump is Adolf Hitler? No. But there are patterns of contempt for opposition by political leaders that are as unacceptable and intolerable as National Socialism.” The Foreign Daughter - Words Without Borders. In this excerpt from her novel The Foreign Daughter, Najat El Hachmi's narrator has resolved to give in to familial pressures to marry, comparing her situation to that of Mundeta Ventura, a character from the Monserrat Roig novel Ramona, adéu. The first novel in a trilogy, and told from a feminist perspective, it depicts the lives of women in a family living in the Eixample, a district of Barcelona that lies between the old city and what were once outlying towns, and whose Modernist-inspired architecture includes Gaudí structures.

As the narrator relates her situation, she meditates on her arrival in Catalunya, the foreignness of her mother's language, and her situation between two worlds. I no longer read. I don’t have the time, and it’s not the right thing for me now. I’ve chosen a life where I should be illiterate like my mother: marry, have children, cook, clean, tidy up, wear myself out every day, and then get up again and do exactly the same as the day before.

Here at Open Culture, we like to think we keep discussions reasonable. Not every site can say that; if you’ve ever dared to scroll down into the comments on Youtube (to pick an example purely at random) you know what I mean. But on that very same repository of streaming videos and shouting matches, you can also find a helpful aid to your debates both online and off: PBS Idea Channel’s “Guide to Common Fallacies.”

On Many Fronts, Women Are Fighting for Better Opportunity in Hollywood. Socrates (In The Form Of A 9-Year-Old) Shows Up In A Suburban Backyard In Washington : Krulwich Wonders... APeoplesHistory - Zinn article for AP US summer reading5-7-2014-105256AM.pdf.