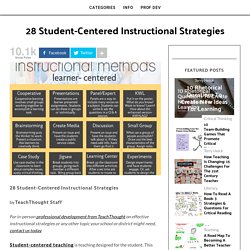 Student-centered teaching is teaching designed for the student. This means that planning often begins with the student in mind as opposed to a school policy or curriculum artifact, for example. Why education should become more like artificial intelligence. Relevance Definition. In education, the term relevance typically refers to learning experiences that are either directly applicable to the personal aspirations, interests, or cultural experiences of students (personal relevance) or that are connected in some way to real-world issues, problems, and contexts (life relevance). 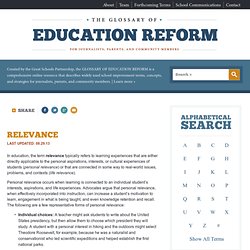 Personal relevance occurs when learning is connected to an individual student’s interests, aspirations, and life experiences. Advocates argue that personal relevance, when effectively incorporated into instruction, can increase a student’s motivation to learn, engagement in what is being taught, and even knowledge retention and recall. The following are a few representative forms of personal relevance: Individual choices: A teacher might ask students to write about the United States presidency, but then allow them to choose which president they will study. Habits of Mind. Research Statement.

Our lab focuses on two traits that predict achievement: grit and self-control. 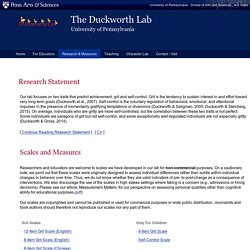 Grit is the tendency to sustain interest in and effort toward very long-term goals (Duckworth et al., 2007). Catholic schools failing to keep up enrollment. The nation's Catholic schools, facing increasing competition, rising costs and a diminishing core of potential pupils, continue to struggle to keep students and find new ones. 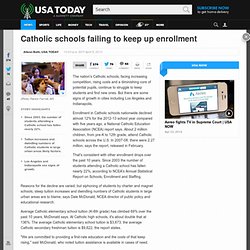 But there are some signs of growth in cities including Los Angeles and Indianapolis. Enrollment in Catholic schools nationwide declined almost 12% for the 2012-13 school year compared with five years ago, a National Catholic Education Association (NCEA) report says. About 2 million children, from pre-K to 12th grade, attend Catholic schools across the U.S. In 2007-08, there were 2.27 million, says the report, released in February. 12 tech trends higher education cannot afford to ignore. Higher education faces an onslaught of disruptive forces right now—and ​no one should be suprised to hear that news. 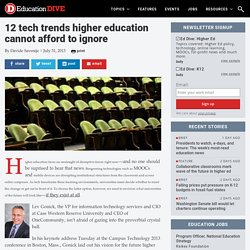 Burgeoning technologies such as MOOCs and mobile devices are disrupting institutional structures from the classroom and across entire campuses. As tech transforms these learning environments, universities must decide whether to resist the change or get out in front of it. To choose the latter option, however, we need to envision what universities of the future will look like—​if they exist at all. Lev Gonick, the VP for information technology services and CIO at Case Western Reserve University and CEO of OneCommunity, isn’t afraid of gazing into the proverbial crystal ball.

In his keynote address Tuesday at the Campus Technology 2013 conference in Boston, Mass., Gonick laid out his vision for the future higher ed and campus IT. Pulling Back the Curtain on Common Core. Common Core’s national K-12 standards, in English language arts (ELA) and math, supposedly emerged from a state-led process in which experts, educators, and parents were well represented. 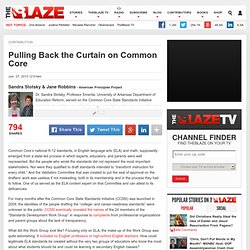 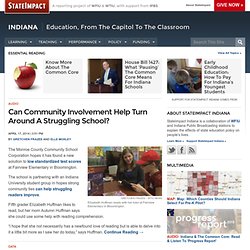 The Monroe County Community School Corporation hopes it has found a new solution to low standardized test scores at Fairview Elementary in Bloomington. The school is partnering with an Indiana University student group in hopes strong community ties can help struggling readers improve. Fifth grader Elizabeth Huffman likes to read, but her mom Autumn Huffman says she could use some help with reading comprehension. “I hope that she not necessarily has a newfound love of reading but is able to delve into it a little bit more as I saw her do today,” says Huffman. Chris Moncus / Wikimedia Indiana's graduation rate has ticked up 10 points in the past five years.

UPDATED, 3:56 p.m. Though the state’s overall graduation rate was virtually unchanged between 2012 and 2013, the non-waiver graduation rate increased about a point — up to 81.7 percent from 80.5 percent. Trying to Be Innovative During a Standardized Time - Finding Common Ground. A few years ago our school raised money for the Heifer Project. Though we had a two year goal, we raised the money in less than one year.

Ready. As teachers, principals and parents, we owe every child an education that properly prepares him or her for their next big steps after graduation – college, career and adulthood. 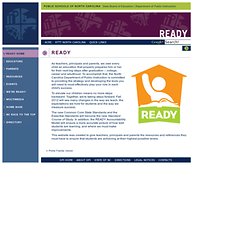 To accomplish that, the North Carolina Department of Public Instruction is committed to providing the strategy and developing the tools you will need to most effectively play your role in each child's success. To elevate our children means no more steps backward. Together, we're taking steps forward. Fall 2012 will see many changes in the way we teach, the expectations we hold for students and the way we measure success.

The new Common Core State Standards and the Essential Standards will become the new Standard Course of Study. This website was created to give teachers, principals and parents the resources and references they must have to ensure that students are achieving at their highest possible levels. Can Innovation Be a Structured Repeatable Process? When Innovation comes to mind, the first thing people may think of is creativity, spontaneity, or a momentary stroke of genius. 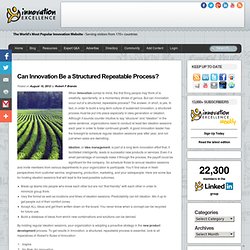 But can innovation occur out of a structured, repeatable process? The answer, in short, is yes. In fact, in order to build a long-term culture of sustained innovation, a structured process must be put into place especially in idea generation or ideation. Those Who Can, Teach. Those Who Cannot, Pass Laws About Teaching. Making the rounds on Facebook is a button I’d very much like to purchase. 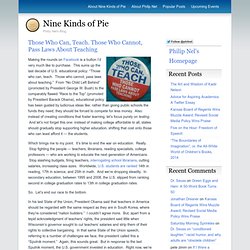 This sums up the last decade of U.S. educational policy: “Those who can, teach. Those who cannot, pass laws about teaching.” From “No Child Left Behind” (promoted by President George W. Bush) to the comparably flawed “Race to the Top” (promoted by President Barack Obama), educational policy has been guided by ludicrous ideas like: rather than giving public schools the funds they need, they should be forced to compete for less money. Texas GOP wages war on thinking. Writing Measurable Learning Objectives.

Sharing. Learning. Leading. Flipping Blooms Taxonomy. Teacher Shelley Wright is on leave from her classroom, working with teachers in a half-dozen high schools to promote inquiry and connected learning. Technology Empowered Staff by Theresa Shafer on Prezi. It's Time for a New Kind of High School. Published Online: May 8, 2012. Video Of Yong Zhao’s Keynote Speech At ISTE. NETS for Coaches. This is not optional anymore… Spending the last four days at a national leadership conference (CASA 11) in Niagara Falls on 21st Century Learning and Innovation (which had no Twitter hashtag until a few of us got together to start one), and then spending the week prior at ISTE, the conversation about technology in schools is a major theme.

What I’m Reading: 11 Blogs to Follow. 5 Keys to Successful Student Collaborations. A Good Prompt is Worth 1,000 Words. About CMK 2014 Constructing Modern Knowledge, July 8-11, 2014, is a minds-on institute for educators committed to creativity, collaboration and computing. Participants will have the opportunity to engage in intensive computer-rich project development with peers and a world-class faculty.