Learning and Teaching with iPads 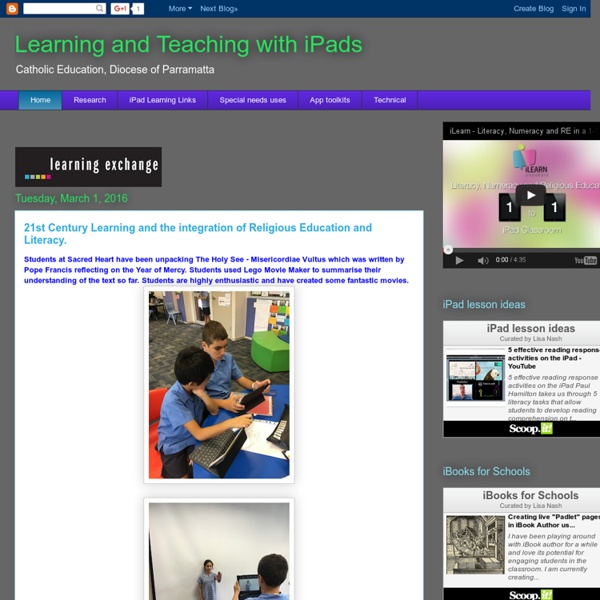 Dark Side of the iPad ~ Collecting student projects is difficult! Since its release the iPad has garnered arguments regarding whether it is primarily a device for consumption or creation. I have always believed that it is a device capable of creation. One simply needs to consider apps such as Avid Studio, DemiBooks Composer, Pages, Keynote, Minecraft Pocket Edition, Art Rage, SketchBook Pro, Comic Life and many others. These and many other apps all allow the user to tap into their talents and produce output of which they can be proud. Of course the iPad is also a worthy consumption device.

An iPad in Every Classroom: Teacher Tested, Student Approved! « Wired Educator We’ve moved! Wired Educator’s new site is: really want you to see the new site. It looks better, reads better, and contains our most recent articles.Please consider:• Subscribing to our email updates at the new site.• Bookmarking our new site address.• Adding our RSS to your feed.• Recommending our new site to a friend. The iPad as RTI Intervention Toolkit While waiting for the iPad to arrive in my reading intervention classroom, I’ve had a lot of time to think and plan how I will use the device. Ground Rules I don’t want hundreds of apps. I’m looking for a few favorites. I don’t want more drill and kill.

Classroom iPad use encourages innovation, reading with ease (Nov. 15, 2011) Nov. 15, 2011 The iPad is catching on as a classroom tool at the University of Wisconsin-Madison. Katy Culver, left, a faculty associate in journalism and mass communication, facilitates an editorial-planning discussion with journalism students in a magazine production class. The class, which uses a combination of iPad tablets, laptop computers and traditional desktop computers, produces Curb Magazine. Photo: Jeff Miller Behaviour Management Software ConductOnline is accessible online anytime from anywhere with an internet connection and web browser. (We recommend Safari, Firefox or IE7 with Flash Player 9 or later.) Since ConductOnline is available 24/7 you can access student data, enter behaviour incidents, communicate with parents and staff, view charts or compile reports from school, home or anywhere else for that matter! ConductOnline allows parental access to their child's behaviour data (see screen shot below). All users have a username and password to access the system, whilst all data transfer between our servers and your computer is encypted.

Whoa Nellie! Are we getting ahead of ourselves? - Keith Rispin » Keith Rispin Smiley with Ringeye Nellie I have had three Whoa Nellie! Moments this past month, which made me realize that this BC ED PLAN world I live in is still pretty isolated from the main stream of educational thought. All the tech here and tech there and personalize this and personalize that talk, is lost on many. It is like no one has even invited them to jump on the bandwagon or perhaps, people might not want any part of the new and improved vision of education I have been immersing myself in. These moments have by no means, dissuaded me from forging ahead and becoming more entrenched in the world of digital driven personalized learning movement but they have certainly made me stop and think about where I am at, in relation to where the real world resides in their thinking.

55 Beautiful Apple iPad Wallpapers - Noupe Design Blog May 31 2010 This is the age of iPhones, iPods and iPads, people simply love to have these amazing inventions of information technology. Apple iPhones have created a state of euphoria among its users with its amazing features and iPad is another product from Apple team that will let you browse internet, watch video, listen music, read books with just a finger touch. Educreations: DIY Whiteboard Video Tutorials on the iPad The new app from Educreations is available in the Apple App Store today (iTunes link). The app is designed to make it easy to create, narrate, and record whiteboard video tutorials on the iPad and to share them with others. A Web version of the startup's whiteboard app has been available for some time now, but it's the native app for an iPad that makes this sort of tool make sense -- it's so much easier to write on a whiteboard with the finger than it is with a mouse, if nothing else. Educreations is hardly the only app like this available for the iPad (I covered the very similar app ShowMe over on MindShift this summer, for example). But while Educreations' iPad app might be late to the whiteboard app market, its entry is a solid one.

How We Got Here Our iPad pilot teachers and I are using this blog to allow you to have a glimpse into our 1:1 iPad pilot classrooms. We've shared practical posts, describing specific teaching and learning experiences as well as what we're learning along the way. This post will take you back to the beginning of our iPad pilot journey and share the details of our implementation. If you're interested in rolling out a technology initiative, involving iPads or any other tools, I believe this post can be useful for you. Learn How To Integrate Technology into The Classroom on the Educational CyberPlayGround. AT&TSeeing the Digital Future (1961) 1966 prediction of the home computer for 1999 2013 Pew survey of 2,462 teachers says 73% of students use mobile devices to complete assignments, 45% use e-readers, and 43% use tablets.

Preposition Builder Preposition Builder, by Mobile Education Store, is another feather in Kyle Tomson’s hat! This dedicated dad has been developing solid speech & language apps for quite some time and Preposition Builder moved him into the mainstream. This app is a wonderful learning tool for all kids at some point in their development. Reviews Home automation, specifically Apple’s HomeKit framework and its compatible accessories, is the latest Thing We’re Supposed to Get Excited About™. And it has a lot of promise for convenience, time-saving, and just generally feeling like you live in the future. The first HomeKit-compatible smartplug is upon us, courtesy of iHome.