Elearnspace. Connectivism: A Learning Theory for the Digital Age 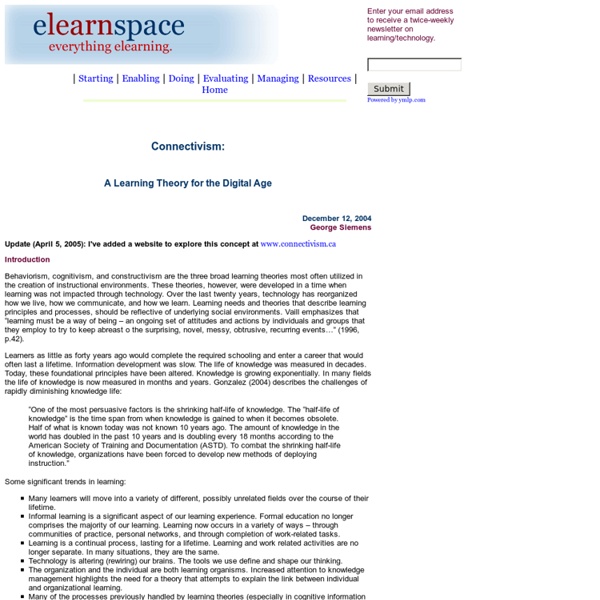 Connectivism: A Learning Theory for the Digital Age December 12, 2004 George Siemens Update (April 5, 2005): I've added a website to explore this concept at www.connectivism.ca Introduction Behaviorism, cognitivism, and constructivism are the three broad learning theories most often utilized in the creation of instructional environments. Learners as little as forty years ago would complete the required schooling and enter a career that would often last a lifetime. “One of the most persuasive factors is the shrinking half-life of knowledge. Some significant trends in learning: Many learners will move into a variety of different, possibly unrelated fields over the course of their lifetime. Background Driscoll (2000) defines learning as “a persisting change in human performance or performance potential…[which] must come about as a result of the learner’s experience and interaction with the world” (p.11). Driscoll (2000, p14-17) explores some of the complexities of defining learning. Conclusion:

Half an Hour: What Connectivism Is Posted to the Connectivism Conference forum (which hits a login window - click 'login as guest' (middle of the left-hand column) - I'm sorry, and I have already complained to the conference organizer). At its heart, connectivism is the thesis that knowledge is distributed across a network of connections, and therefore that learning consists of the ability to construct and traverse those networks. It shares with some other theories a core proposition, that knowledge is not acquired, as though it were a thing.

Awesome Chart on " Pedagogy Vs Andragogy " Adult learning is a vast area of educational research and probably one of the most complicated. Adults learn differently and have different strategies in learning. Adults Learning Theory and Principles explain in details these strategies and sheds more light on how adults cultivate knowledge. Talking about adult learning brings us to the concept of Andragogy. According to the article Malcolm Knowles an American practitioner and theorist of adult education, defined andragogy as “the art and science of helping adults learn”. What Is Web 2.0 by Tim O'Reilly 09/30/2005 Oct. 2009: Tim O'Reilly and John Battelle answer the question of "What's next for Web 2.0?" in Web Squared: Web 2.0 Five Years On. The bursting of the dot-com bubble in the fall of 2001 marked a turning point for the web.

Innovative program rethinks high school November 3, 2014 | By Michelle Maitre | 2 Comments No bells ring at this high school, and you won’t find monitors roaming the halls or restless students asking fitfully for permission to use the restroom. But you might find biotechnology students cloning carrots in the lab, or see public policy students researching ballot propositions in preparation for a community-wide town hall forum they’re organizing, or watch a group of budding computer scientists hunched over a computer monitor, creating a video game they’ve designed from scratch. “We think we are a special place,” said Rick Watson, chief executive officer at the Center for Advanced Research and Technology. The center is a public high school program located in the Central Valley city of Clovis, where about 1,400 students a year participate in half-day career-based courses featuring cutting-edge technology and equipment. What makes CART unique isn’t only its approach, but also its composition.

Research: Working alone won’t get you good grades This new research is in line with earlier research on the role of social media in education, working together helps students to perform better. From the press release: Students who work together and interact online are more likely to be successful in their college classes, according to a study co-authored by Manuel Cebrian, a computer scientist at the Jacobs School of Engineering at the University of California San Diego. Cebrian and colleagues analyzed 80,000 interactions between 290 students in a collaborative learning environment for college courses. The major finding was that a higher number of online interactions was usually an indicator of a higher score in the class. High achievers also were more likely to form strong connections with other students and to exchange information in more complex ways.

A new classification for MOOCs – Gráinne Conole Gráinne Conole is Professor of learning innovation at the University of Leicester. Her research interests include the use, integration and evaluation of Information and Communication Technologies and e-learning and the impact of technologies on organisational change. She regularly blogs on www.e4innovation.com and is @gconole on Twitter. She has successfully secured funding from the EU, HEFCE, ESRC, JISC and commercial sponsors). Debunking the Genius Myth Picture a “genius” — you’ll probably conjure an image of an Einstein-like character, an older man in a rumpled suit, disorganized and distracted even as he, almost accidentally, stumbles upon his next “big idea.” In truth, the acclaimed scientist actually said, “It’s not that I’m so smart, it’s just that I stay with problems longer.” But the narrative around Einstein and a lot of accomplished geniuses — think Ben Franklin, the key and the bolt of lightning — tends to focus more on mind-blowing talent and less on the hard work behind the rise to success.

Connectivism Blog: Connectivism Archives I enjoy instructing instructors. Any long term change in our formal learning institutions will be bottom up - as educators change and experiment with new ways to maximize the learner's experience and value. Recently, I instructed a course on "testing, evaluation, and assessment". Some learners responded quite favorably to my approach, others felt I was downright cruel. The traditional view of education (teach and test) is strongly rooted in our schools/colleges. New methods of instructions are often seen with distrust.