Teaching with Technology Collaboratory - Improving the Use of Discussion Boards 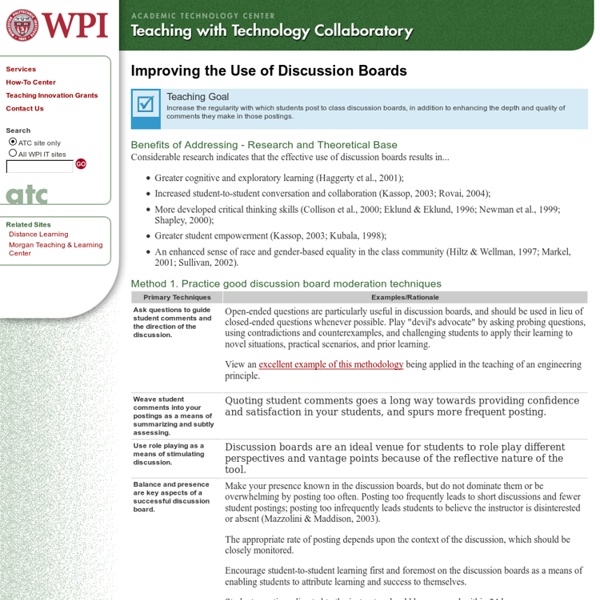 3 Reasons Students Don’t Participate in Online Discussions ‘Why don’t my students participate in online discussion forums?’ I’ve received numerous comments [questions] like this one, about the lack of student participation in online discussion forums from instructors who appear more puzzled than frustrated. Why don’t students contribute even when their involvement is graded? An important question to address. As we navigate through adapting pedagogy for online teaching and learning, determining the why and how of student interaction is worthy of consideration. In this post I’ll share what I’ve discovered through an analysis of post-course surveys that might explain why students hold back from getting involved in forum discussions. In previous posts on this blog I’ve offered several suggestions for encouraging student participation in discussion forums that include: Still, non-participation persists. 1) Poor timing of due dates This timing can be awkward for working adults. 2) Reticent Students 3) Student Posts that are shallow/lack depth Like this:

Why This Professor Is Encouraging Facebook Use in His Classroom Facebook and academe aren’t exactly friends. Over the years, the social-media company has been the source of ethically questionable research, the purveyor of uncomfortable teacher-student interactions, and, of course, the consummate classroom distraction, scourge of lecture halls the world over. At least on that last note, however, one researcher says higher education has unfairly maligned the social-media behemoth. Kevin D.

U. of Illinois apparently revokes job offer to controversial scholar Many faculty job offers (which are well-vetted by college officials before they go out) contain language stating that the offer is pending approval by the institution's board of trustees. It's just a formality, since many college bylaws require such approval. Not so with a job offer made to Steven G. Salaita, who was to have joined the American Indian studies program at the University of Illinois at Urbana-Champaign this month. The appointment was made public, and Salaita resigned from his position as associate professor of English at Virginia Tech. The university declined to confirm the blocked appointment, but would not respond to questions about whether Salaita was going to be teaching there. Salaita did not respond to numerous calls and emails. The sources familiar with the university's decision say that concern grew over the tone of his comments on Twitter about Israel's policies in Gaza. “I think the chancellor made the right decision," he said via email.

Another Use for Yik Yak on Campus? Cheating on Exams With new technologies come new ways to cheat. Yik Yak, the anonymous, location-based app that has been a hotbed of cyberbullying on college campuses, is also the newest tool for students seeking to cheat on exams. J. Scott Christianson, an assistant teaching professor in the department of management at the University of Missouri at Columbia, has been monitoring Yik Yak recently to see what students are talking about. When he was on the app, he saw several yaks about an exam. In November the student newspaper at the State University of New York at Stony Brook reported that students there had used Yik Yak to share answers on quizzes and tests, especially in large lecture classes. Given the app’s anonymity, it’s likely that Yik Yak seems a safe way to spread the word. Students have found many ways to violate academic integrity over the years — this one is just more high-tech. Professors could also try to interfere with the process. Return to Top

e-Professionalism Using Social Media Tools Welcome to e-Professionalism! This course is designed for faculty and students to ensure they know how to use social media tools effectively in their personal and professional lives. Begin by watching the video below. Then, proceed through the course starting with the Social Media Survey in the black navigation bar above. 75% of adults age 18-24 use social media sites such as Facebook and Twitter. 60% of all adults use social media sites. Social media tools allow people to create new relationships and stay connected with friends and family. Social media tools encourage creative expression, bring people with common interests together, expose people to new ideas from around the world, and provide new sources of information that are not controlled by the mass media. Social media tools offer people the opportunity to create a positive image of themselves, an ‘Internet presence’ for the world to see. But… Consider the actual news stories that follow. The Dog Poop Girl The Swim Team's Facebook Group

New Era in School Security and Safety – Social Media Monitoring One of the realities of our times is that schools have become a focus of threats. Nightly news stories cover everything from the horrors of mass shootings to cyber bullying, harassment and children driven to suicide with appalling frequency. School administrators see a different picture. The cries for help are there, even if the signs of risk are often masked by what adults consider those “troubled teenage years.” There is no shortage of opinion on monitoring and, of course, those opinions are being aired online. No Monoliths Social media monitoring is delivered through a variety of means and they have vastly different levels of intrusion and impacts. Some of the current service providers offer real-time social media monitoring, taking a less intrusive approach to monitoring with the creation of a “geofence” to monitor data from selected social media sources within a 5-10 mile radius surrounding a school. Geolocation creates a snapshot of what’s happening within the targeted area.

Social Media Awareness: A Letter for Parents This week some of the students and staff at our high school felt the affects of when social media can be used to harass with the app Yik Yak. While the app in this case is blocked on our devices and network, students were using their phones to participate in this harassment and cyber-bullying. What follows is the letter I sent to all Middle School and High School parents in our community. I’m sharing this with you all in the hopes that we can all be aware of not only this specific app but also the fact that we need to have a constant communication between parent, school and child. (UPDATE: Since sharing this, we were interviewed by the local news here) In light of this week’s incidents involving the inappropriate use of the app Yik Yak to harass Westlake students and staff, this is a good opportunity to open the door to a greater conversation we should be having with our kids about social media and their “digital footprint.” More about Yik Yak Next steps – So….What Else is Out There? Kik Yo.

Sexting And Cyberbullying in Schools When students have access to mobile devices in school, either in a 1:1 or BYOD environment, much of what happens in their school lives cross over into their personal lives. Here at Eanes ISD, over 80% of our secondary students have smartphones that they bring with them to school on top of the school-issued iPad they are given. While we have some say about the activity on the school device, students’ use of their phones for inappropriate activity is an issue both in and out of school. Today, I sent home the following letter about sexting and cyberbullying via a couple of different apps that we’ve become privy to here. The following is a letter sent to all parents of secondary school-aged children at Eanes ISD on January 11, 2016: Parents of Secondary Students, Adolescents today have access to knowledge and learning right at their fingertips. Sexting In the case of the school in Colorado, many students used a photo vault app like the one we shared last year that looks like a calculator.