From Twitter to tablets: my best lessons using technology. David Rogers explains how students' own devices and school tablets can enhance data collection alongside traditional paper based techniques on field trips. 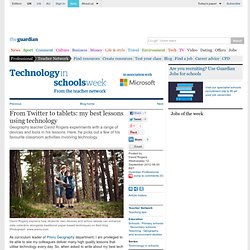 Photograph: www.alamy.com As curriculum leader of Priory Geography department, I am privileged to be able to see my colleagues deliver many high quality lessons that utilise technology every day. So, when asked to write about my best tech lesson I decided early on to focus on some of the ideas that have spanned not only my classroom but moved into others. We are well known for our creative and naughty approach to learning. IPads. My Edmodo Journey.

The Art of Teaching Science. If only teaching K-12 science was itself a science – assess student knowledge deficits and remedy them. 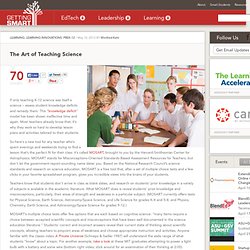 This “knowledge deficit” model has been shown ineffective time and again. Most teachers already know that; it’s why they work so hard to develop lesson plans and activities tailored to their students. So here’s a new tool for any teacher who’s spent evenings and weekends trying to find a lesson that’s the perfect fit for their class: it’s called MOSART, brought to you by the Harvard-Smithsonian Center for Astrophysics. MOSART stands for Misconceptions-Oriented Standards-Based Assessment Resources for Teachers, but don’t let the government-report-sounding name deter you.

Based on the National Research Council’s science standards and research on science education, MOSART is a free tool that, after a set of multiple choice tests and a few clicks in your favorite spreadsheet program, gives you incredible views into the brains of your students. 10 Reasons To Try 20% Time In The Classroom. If you haven’t heard of 20% time in the classroom , the premise is simple: Give your students 20% of their class time to learn what they want.

Yes, that’s it. Below is a list of the 10 reasons you should consider 20% time in your school, and you will not regret making that choice! 1. You will join a great community of learners When I first did the 20% project with my students I didn’t have a community of teachers or learners. 2. One of the major issues we face in schools today is covering a wide breadth of information, instead of allowing students to get a real depth of knowledge. iPads in the classroom: embedding technology in the primary curriculum. Last year David Andrews wrote for us about how he was using one-to-one devices in the classroom in the hugely popular blog post: An Apple for the teacher: are iPads the future in class? 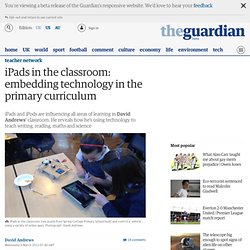 Here, he updates us on his progress and shares some of his favourite technology-led learning ideas. Since the start of September 2012 myself and a colleague, Chris Williams, have been trying to maximise the use of handheld technology (iPads and iPods) in year 6 in all areas of the curriculum. The potential for enhancing teaching and learning through technology has been particularly interesting: we've developed a range of apps using both iPads and iPods to engage, motivate and inspire pupils' learning in the classroom. The school's 'Apple journey' began in June 2012. Once the year 6 SATs were finished, we gave both our year 6 classes a two-week project to build a controllable vehicle.

Allowing the children to work in this manner shifted the learning from teacher-centred to child-centred.

14 Smart Tips for Using iPads in Class. Case studies. Taxonomy of an iPad lesson. I haven't blogged about our iPad journey for a while, so I thought I'd update how it's going, and impart a few of the lessons I've learnt the hard way! 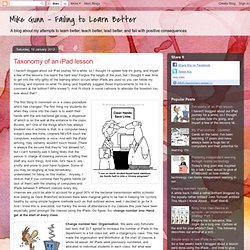 Forgive the length of the post, but I thought it was time to get into the nitty-gritty of the learning which occurs when iPads are used so you can follow my thinking, and improve on what I'm doing (and hopefully suggest those improvements to me in a comment at the bottom? Educational Technology and Mobile Learning: The 33 Digital Skills Every 21st Century Teacher should Have. By EdTech Team Updated on march 2, 2015 : The original list that was created in 2011 comprised 33 skills , after reviewing it we decided to do some merging and finally ended up with the 20 skills below. 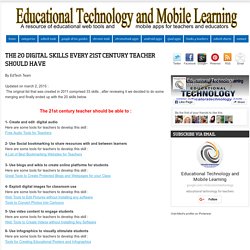 The 21st century teacher should be able to : Casllwchwr:Week 2. Well, we are into Week 2 and I have to say that the opportunities the individual iPads have allowed for my whole class have been endless. 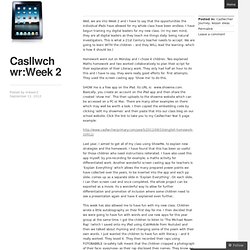 I have begun training my digital leaders for my new class. (In my own mind, they are all digital leaders as they teach me things daily: being natural investigators. This is what a 21st Century teacher needs to accept. We are going to learn WITH the children – and they WILL lead the learning- which is how it should be.) Introduction to iPads: Part 2. How does a teacher start to use iPads in the classroom? 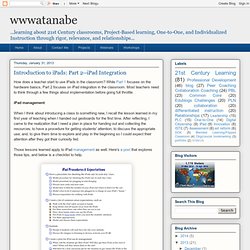 While Part 1 focuses on the hardware basics, Part 2 focuses on iPad integration in the classroom. Most teachers need to think through a few things about implementation before going full throttle. iPad management. How Much Are iPads Really Helping Kids in the Classroom? The drive to increase technology use in classrooms has many asking whether the investment is more fizzle than bang, and whether it’s too early to tell how wisely the money is being spent. 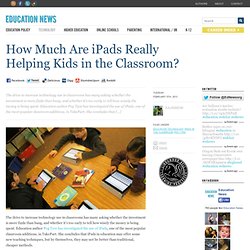 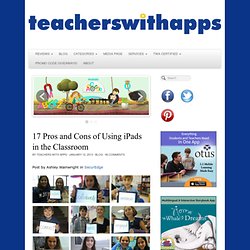 Some schools have brought them in through 1:1 initiatives and other seen them start to flood in after implementing BYOD policies. As with anything else, teachers have seen some pros and cons with this cool, new classroom technology. Here’s a list of some things to expect with iPads in the classroom. Students love them- this one’s pretty obvious, but they really do. iPads in the classroom will get even the most stubborn students excited and engaged.Good battery life- this is one of my favorite things about it! Taxonomy of an iPad lesson. Using Socrative app for iPad – AfL the fun way! « Smarter Learning. I have recently started to experiment with the Socrative app that is available online and via apps for iPad, iPhone and also Android mobile devices. 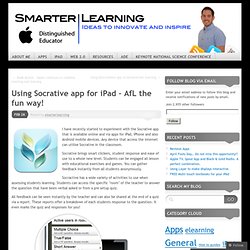 Any device that access the internet can utilise Socrative in the classroom. Socrative brings smart clickers, student response and ease of use to a whole new level. Students can be engaged all lesson with educational exercises and games. You can gather feedback instantly from all students anonymously. The 2 Hottest Educational Social Networks You’re Not Yet Using. The world of edtech is abuzz this week thanks to a smattering of exciting news. First, we had Stanford creating an entirely new position and office for online learning . Now something that signals a seismic shift in the edtech world. Companies and startups alike are jumping feet-first into the edtech world , hoping to connect educators like never before. They’re doing this by creating their very own social networks with functionality that rivals Facebook and Twitter.

5 Essential Tips To Help Integrate iPads Into Your School. Visualising Ideas - Sailing Away in 3 Different Directions with EDMODO. Photo by Omri Epstein I first learned about Edmodo from Sandy Millin’s detailed post back in June, 2011. Yes, that was quite a while ago but till recently I hadn’t had any real incentive to experiment with it on my own. Tools I had already mastered were enough for me. All that changed after I had taught my first course to 38 adult students in a private language school and had agreed to teach another such course.

I was determined to ERADICATE some of the problems I had encountered the first time around and I can’t thank Sandy Millin enough for discussing Edmodo with me. “Let there be light!” Literacy in PE. Literacy is a key theme this year and one which is being raised and commented a lot in various forums. Ideas and discussion have flowed on Twitter. Numerous blog ideas have looked at how to develop better reading or writing techniques with students. I have had books recommended to me and courses have passed through my inbox. Now I am no expert at all. Not in the slightest. 18 iPad uses: How classrooms are benefiting from Apple's tablets. Apple's iPads are quickly becoming a popular and powerful educational tool for classrooms. 7 habits of highly effective teachers Always Prepped Blog.

We’ve all heard about Stephen Covey’s 7 Habits of Highly Effective People. Some teachers out there may have heard of the 7 Habits of Highly Effective Teachers. What can you do with an iPad in the classroom? Teachers Guide on The Use of ePortfolios in Education. MuyBlog – The Empty Backpack. Top 3 #Edtech Inspired Learning Tips – Plus 5 App Suggestions. Social media users may have heard of a ‘chat’ but students don’t necessarily understand the learning implications a ‘chat’ can have. The effectiveness of a twitter-chat is down to the setup and the expectations placed upon students. iPad/iPod pedagogy - Mat Pullen's teaching and learning journey. Touch and go. Since the introduction of the iPad and the subsequent parade of similar touch screen tablets, there has been much speculation about exactly what impact the devices might have on learning and teaching.

A lot has been written about the potential of the devices, and much has been purely anecdotal. Clearly tablets are easy to use and have potential to revolutionise the way people access information. But what about formal education? Grr! The ‘Flipping’ iPad (Top 3 Workflow Solutions?) It’s not a problem as such.