Motivator: Create your own motivational posters! 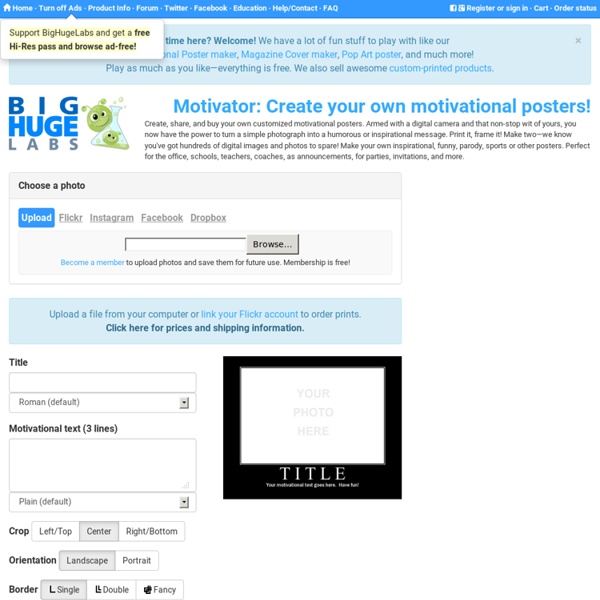 First time here? Welcome! We have a lot of fun stuff to play with like ourMotivational Poster maker, Magazine Cover maker, Pop Art poster, and much more! Play as much as you like—everything is free. We also sell awesome custom-printed products. Create, share, and buy your own customized motivational posters.

50 Education Technology Tools Every Teacher Should Know About via Edudemic Technology and education are pretty intertwined these days and nearly every teacher has a few favorite tech tools that make doing his or her job and connecting with students a little bit easier and more fun for all involved. Yet as with anything related to technology, new tools are hitting the market constantly and older ones rising to prominence, broadening their scope, or just adding new features that make them better matches for education, which can make it hard to keep up with the newest and most useful tools even for the most tech-savvy teachers.

Khrzhanovsky’s ‘Glass Harmonica’: Subversive surrealist late-‘60s Russian animation Khrzhanovsky’s ‘Glass Harmonica’: Subversive surrealist late-‘60s Russian animation In the opening titles of his 1968 animated short Glass Harmonica, Russian director Andrei Khrzhanovsky claims to present a cautionary against “boundless greed, police terror, [and] the isolation and brutalization of humans in modern bourgeois society.” Of course, it was more complex than that. At the time Khrzhanovsky made the film, Russian animation had experienced a creative renaissance that spanned most of the ‘60s, fuelled by the Soviet Union’s post-Stalinist liberalization policy best known as the Krushchev Thaw. Although that period yielded cutesy and colorful satires like Fyodor Khitruk’s 1962 short Story of a Crime, Glass Harmonica—which posits music to symbolize beauty repressed by avarice—stands apart.

Sign Generators - Preview Images (Thumbnails) List Below is a thumbnail list of 90% of the image generators (change captions in pictures of things) found on www.SignGenerator.org. Just click the image and you will be taken to the text editor (change the captions) in a new window. You can send your personalized images as FREE e-cards or download the freebie clipart images (even upload so you can use on blogs/profiles/forums/sites). We have an image generator for almost any occasion (over 500 templates)! Get familiar with all out designs, you will think of many ways to use them later on down the road. You can also buy your creations as personalized fridge magnets or custom postcards!

32 Innovative (Free!) Online Educational Tools to Try in 2015 Want to be a better student? There are literally thousands of apps for that. Not to mention a wide array of other online learning tools. Stewart Lee's insider's take on William and Kate | Stage The selection of Kate Middleton, a lowly commoner drawn from the very dregs of society, as Prince William's bride has been the subject of great speculation, much of it thinly veiled snobbery. But Britain is broken. Social mobility is at a historic low, state education and public healthcare are in crisis, and our own prime minister has blamed the truculent immigrant and his concealed wife for our lack of national cohesion. Once upon a time, royal marriages were political acts that forged links between different nations. Instead, William and Kate's wedding will bind this nation to itself, and in marrying so very far beneath himself, I believe the young prince has made a heroic and deliberate sacrifice to achieve this end.

A Web 2.0 Class Christopher Columbus was wrong when he reported to the King and Queen that the world is round. In fact, the world is flat and so are many of our classrooms in this great nation. For years, students learned within the parameters of a building, which then separated them into rooms. Students would attend class daily and the teacher would present the daily lesson. 50 Classic Russian Films (Including Tarkovsky’s Finest) Now Online We have previously featured films by the great Russian filmmaker Andrei Tarkovsky. So we’re overjoyed to report that the Moscow film company Mosfilm has just made 5o Russian classics available on YouTube in high definition. According to Yahoo News, Mosfilm has pledged to release five more films each week, all in HD with English subtitles, eventually bringing the total for the year to 200. You can look over the whole list of currently available classics at Mosfilm’s YouTube channel. (Non-Russian speakers might want to hit Google Translate.) In yet another concession to the decadence of Western capitalism, each film is preceded by a short commercial.

Online Charts Builder Hohli Online Charts Builder New version: How Teachers Can Become Fluent in Classroom Technology During one of our last leadership team meetings this past school year, we reflected on our use of digital portfolios to house student work. We had a lot to celebrate: We had found a digital tool to capture student learning, Evernote, a cloud-based note-taking app. No one felt much pressure to be the best at using technology. Parent feedback, although limited in the initial stages of this project, was very positive. Things were looking up going into the fall. But a variety of concerns were also shared.

Create Interactive Flyers with ThingLink and SoundCloud Advertisement Thanks to this morning’s tabs over at @WAMMusic, I stumbled upon this shiny gem of information. Photo tagging company ThingLink has integrated with SoundCloud in a way that entirely altered my perception of photos and show flyers in the digital realm. ThingLink is a free service, self-described as “an interactive hotspot you define inside an image, from a thing (an object, a person, or a place) to a link (a shop, a blog post, or anywhere you like).” Basically, this service lets you insert audio, links, and information on top of your image (unobtrusively) so viewers can learn more about the image when they hover over one of the “hotspots.”

Salvador Dalí Illustrates Alice in Wonderland, 1969 by Maria Popova What the Mad Hatter has to do with one of the most inspired collaborations in Western culture. Last week, we marveled at Leonard Weisgard’s stunning illustrations for the first color edition of Alice in Wonderland, circa 1949. But it turns out they might not be the most culturally intriguing. Open University Innovations Report #3 This series of help sheets is designed for people who are trying out distance and online education for the first time, and for teachers who have already taught at a distance and want to try something new. Each help sheet outlines one approach to learning at a distance and provides guidance on how to put this into practice. All the help sheets are based on approaches covered in past Innovating Pedagogy reports and take into account that students may have only limited access to technology and the Internet. The latest report in our annual series explores new forms of teaching, learning and assessment for an interactive world, to guide teachers and policy makers in productive innovation. Download Innovating Pedagogy 2020 This eighth report, produced in collaboration with the National Institute for Digital Learning (NIDL), Dublin City University, Ireland, proposes ten innovations that are already in currency but have not yet had a profound influence on education in their current form.

A 3D Tour of Picasso’s Guernica You can learn more about the famous anti-war painting, now housed at the Museo Reina Sofía in Madrid, by checking out the Smarthistory primer posted below. In the meantime, we’re highlighting today a digitally-rendered 3D tour of Picasso’s landmark work. It’s the creation of Lena Gieseke, a visual effects artist who, once upon a time, was married to the filmmaker Tim Burton. Some will consider the idea of putting Guernica in 3D downright blasphemous.