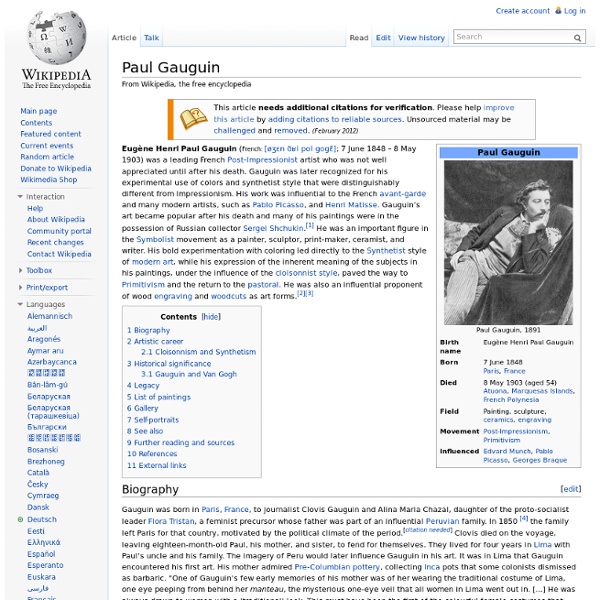 Biography[edit] Early life[edit] Gauguin was born in Paris, France, to journalist Clovis Gauguin and Alina Maria Chazal, daughter of the proto-socialist leader Flora Tristan, a feminist precursor whose father was part of an influential Peruvian family. In 1850 [4] the family left Paris for Peru, motivated by the political climate of the period.[citation needed] Clovis died on the voyage, leaving 18-month-old Paul, his mother, and sister, to fend for themselves. One of Gauguin's few early memories of his mother was of her wearing the traditional costume of Lima, one eye peeping from behind her manteau, the mysterious one-eye veil that all women in Lima went out in. [...] At the age of seven, Gauguin and his family returned to France, moving to Orléans to live with his grandfather. In 1873, he married a Danish woman, Mette-Sophie Gad (1850–1920). His middle-class family and marriage fell apart after 11 years when Gauguin was driven to paint full-time. Artistic career[edit] Martinique[edit] Related:  Photos C

Henri de Toulouse-Lautrec Henri Marie Raymond de Toulouse-Lautrec-Monfa or simply Henri de Toulouse-Lautrec (French: [ɑ̃ʁi də tuluz lotʁɛk]; 24 November 1864 – 9 September 1901) was a French painter, printmaker, draughtsman and illustrator whose immersion in the colourful and theatrical life of Paris in the late 19th century yielded a collection of exciting, elegant and provocative images of the modern and sometimes decadent life of those times. Toulouse-Lautrec is among the best-known painters of the Post-Impressionist period, a group which includes Cézanne, Van Gogh and Gauguin. In a 2005 auction at Christie's auction house, a new record was set when La blanchisseuse, an early painting of a young laundress, sold for US$22.4 million.[1] Early life[edit] After the death of his brother his parents separated and a nanny took care of Henri.[3] At the age of eight, Henri went to live with his mother in Paris where he drew sketches and caricatures in his exercise workbooks. Disability and health problems[edit] Mr.

WebCite archive page This page allows you to submit a single URL for instant archiving with WebCite®, a member of the International Internet Preservation Consortium. Archiving in WebCite® allows anybody (particularly authors and editors of scholarly papers, books etc.) to cite a stable version of a Web page (including Blogs, Wiki, PDF file, and other webdocuments), making it "citable" in an academic context. It also provides the cited author and the academic commmunity with WebCite® impact statistics. The content of the page requested below will be immediately archived, including any inline images and / or media (up to a maximum size). WebCite® automatically determines if the webpage is already archived, and if yes, will merely create a link to the already archived copy. As part of the archiving process, an e-mail will be sent to the address of the citing author below, containing the unique URL that can be used to access the archived content, which should be used if you cite the Web page. Cite this page!

Japonism Japonism (from the French Japonisme, first used in 1872[1]) is the influence of the Japanese art, culture, and aesthetics.[2][3] The term is used particularly to refer to Japanese influence on European art, especially in impressionism.[4] In France the term Japonisme refers to a specific French style which mainly found expression in fine arts from 1864,[5] while in England it initially had an impact on decorative arts with the first documented pieces of furniture in the Anglo-Japanese style in 1862, even if the term Anglo-Japanese was used as early as 1851.[6] From the 1860s, ukiyo-e, Japanese wood-block prints, became a source of inspiration for many European impressionist painters in France and elsewhere, and eventually for Art Nouveau and Cubism. Artists were especially affected by the lack of perspective and shadow, the flat areas of strong color, and the compositional freedom gained by placing the subject off-centre, mostly with a low diagonal axis to the background. History[edit]

Vincent van Gogh Vincent Willem van Gogh (Dutch: [ˈvɪnsɛnt ˈʋɪləm vɑn ˈɣɔx] ( );[note 1] 30 March 1853 – 29 July 1890) was a Post-Impressionist painter of Dutch origin whose work—notable for its rough beauty, emotional honesty, and bold color—had a far-reaching influence on 20th-century art. After years of painful anxiety and frequent bouts of mental illness,[1][2] he died aged 37 from a gunshot wound, generally accepted to be self-inflicted (although no gun was ever found).[3][note 2] Letters Vincent c. 1873 aged 19. This photograph was taken at the time when he was working at the branch of Goupil & Cie's gallery in The Hague.[5][6] Although many are undated, art historians have generally been able to put them in chronological order. Biography Early life Vincent c. 1866, approx. age 13 As a child, Vincent was serious, silent, and thoughtful. The house "Holme Court" in Isleworth, where Van Gogh stayed in 1876 [23][24] Van Gogh's religious zeal grew until he felt he had found his true vocation. Emerging artist

Paul Cézanne Paul Cézanne (US /seɪˈzæn/ or UK /sɨˈzæn/; French: [pɔl sezan]; 1839–1906) was a French artist and Post-Impressionist painter whose work laid the foundations of the transition from the 19th-century conception of artistic endeavour to a new and radically different world of art in the 20th century. Cézanne's often repetitive, exploratory brushstrokes are highly characteristic and clearly recognizable. He used planes of colour and small brushstrokes that build up to form complex fields. The paintings convey Cézanne's intense study of his subjects. Cézanne can be said to form the bridge between late 19th-century Impressionism and the early 20th century's new line of artistic enquiry, Cubism. §Life and work[edit] §Early years and family[edit] Femme au Chapeau Vert (Woman in a Green Hat. Going against the objections of his banker father, he committed himself to pursuing his artistic development and left Aix for Paris in 1861. §Cézanne the artist[edit] §Optical phenomena[edit] §Death[edit]

Kaga-artgallery - Cleopatra - John William Waterhouse Henri Matisse Henri-Émile-Benoît Matisse (French: [ɑ̃ʁi matis]; 31 December 1869 – 3 November 1954) was a French artist, known for his use of colour and his fluid and original draughtsmanship. He was a draughtsman, printmaker, and sculptor, but is known primarily as a painter.[1] Matisse is commonly regarded, along with Pablo Picasso and Marcel Duchamp, as one of the three artists who helped to define the revolutionary developments in the plastic arts in the opening decades of the twentieth century, responsible for significant developments in painting and sculpture.[2][3][4][5] Although he was initially labelled a Fauve (wild beast), by the 1920s he was increasingly hailed as an upholder of the classical tradition in French painting.[6] His mastery of the expressive language of colour and drawing, displayed in a body of work spanning over a half-century, won him recognition as a leading figure in modern art.[7] Early life and education[edit] Early paintings[edit] Fauvism[edit] After Paris[edit]

Arabic calligraphy The Arabic alphabet ARABIC is written from right to left. There are 18 distinct letter shapes, which vary slightly depending on whether they are connected to another letter before or after them. There are no "capital" letters. The full alphabet of 28 letters is created by placing various combinations of dots above or below some of these shapes. (An animated version of the alphabet shows the correct way to move the pen). The three long vowels are included in written words but the three short vowels are normally omitted – though they can be indicated by marks above and below other letters. Although the Arabic alphabet as we know it today appears highly distinctive, it is actually related to the Latin, Greek, Phoenician, Aramaic, Nabatian alphabets. The numerals used in most parts of the world – 1, 2, 3, etc – were originally Arabic, though many Arab countries use Hindi numerals. Decorative writing – calligraphy – is one of the highest art forms of the Arab world. Styles of calligraphy