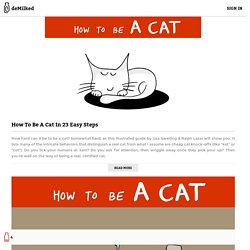 Somewhat hard, as this illustrated guide by Lisa Swerling & Ralph Lazar will show you. Every Spring This Forest In Belgium Becomes A Blue Wonderland. EmailEmail There’s a mystical forest in Belgium, not far from Brussels, that will take your breath away if you visit it in April or May. 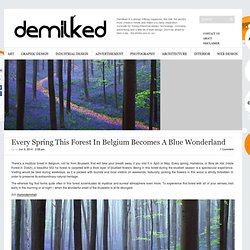 29 Satellite Photos That Will Change Your Perspective On Planet Earth. EmailEmail Daily Overview is a new project that posts one new satellite photograph every day from places around the world that have been touched by human activity. 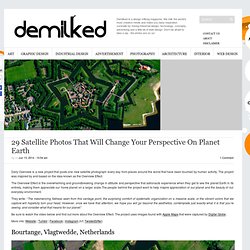 The project was inspired by and based on the idea known as the Overview Effect. The Overview Effect is the overwhelming and groundbreaking change in attitude and perspective that astronauts experience when they get to see the planet Earth in its entirety, making them appreciate our home planet on a larger scale.The people behind the project want to help inspire appreciation of our planet and the beauty of our everyday environment. They write: “The mesmerizing flatness seen from this vantage point, the surprising comfort of systematic organization on a massive scale, or the vibrant colors that we capture will hopefully turn your head. Favorite Alcoholic Drinks Look Stunningly Colorful Under a Microscope - My Modern Met. So, we’ve seen what drugs look like under the microscope, but how about alcohol? 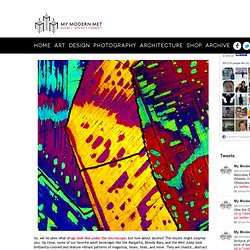 The results might surprise you. Up Close Look at the Chemical Compound of Various Drugs. Ketamine Whether legal or illegal, drugs come in all different shapes and sizes including small painkiller pills, liquid cough syrup, and everything in between. 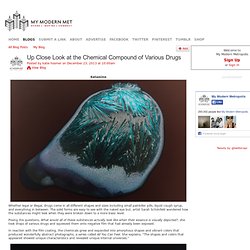 The solid forms are easy to see with the naked eye but, artist Sarah Schönfeld wondered how the substances might look when they were broken down to a more basic level. Posing the questions, What would all of these substances actually look like when their essence is visually depicted? , she took drops of various drugs and squeezed them onto negative film that had already been exposed. In reaction with the film coating, the chemicals grew and expanded into amorphous shapes and vibrant colors that produced wonderfully abstract photographs, a series called All You Can Feel. Caffeine. 12 Rarest Species: I Bet You Never Met Before. The Bumblebee Bat – the incredible bumblebee bat is one of the smallest mammal in the world, weighing about the weight of a penny. 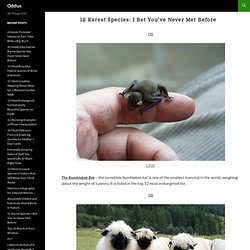 It is listed in the top 12 most endangered list. The crazy looking Valais Blacknose Sheep from Switzerland. The Glass Frogs are frogs of the amphibian family Centrolenidae. While the general background coloration of most glass frogs is primarily lime green, the abdominal skin of some members of this family is translucent. Adorable Traveling Hedgehog Explores the Great Outdoors - My Modern Met. Meet Biddy, a tiny hedgehog who has big adventures. 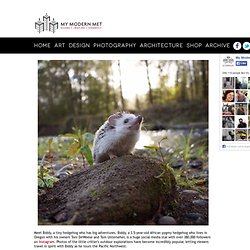 Biddy, a 3.5-year-old African pygmy hedgehog who lives in Oregon with his owners Toni DeWeese and Tom Unterseher, is a huge social media star with over 380,000 followers on Instagram. Photos of the little critter's outdoor explorations have become incredibly popular, letting viewers travel in spirit with Biddy as he tours the Pacific Northwest. 42 Of The Most Powerful Social And Environmental Ads That Will Change The Way You Think. No matter how tired and irritated we might be about the overwhelming flow of advertisements around us, social ads still manage to catch our attention and shock us pretty easily. 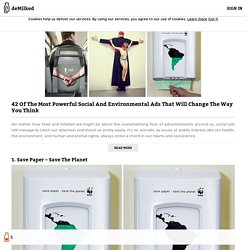 It’s no wonder, as issues of public interest, like our health, the environment, and human and animal rights, always strike a chord in our hearts and conscience. This is a compilation of 42 powerful ad campaigns that will inevitably leave you thinking about the issues our world faces. You’ve got to admire these advertisers’ creativity and insight, too!

Via: Bored Panda. 65 Students Of Colour Share Their Experiences Of Life At Oxford University. The Strangest Animals You've Never Heard Of. Here’s a small collection of bizarre animals that we hope some of you may have never heard of. 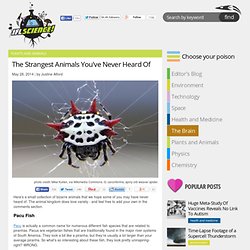 The animal kingdom does love variety - and feel free to add your own in the comments section. Pacu Fish Pacu is actually a common name for numerous different fish species that are related to piranhas. Pacus are vegetarian fishes that are traditionally found in the major river systems of South America. Bucket List No. 3: Ski to the Pacific Rim of Fire — KNSTRCT - Carefully Curated Design News. For many of us, the closest we get to anything remotely resembling adventure is sitting curled up in our Snuggie, captivated as Bear Grylis wrestles a water buffalo into submission somewhere deep in Bhutan. 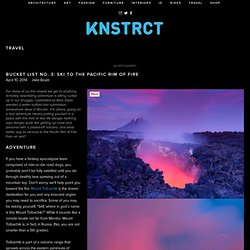 For others, going on a real adventure means putting yourself in a place with the thrill of real life danger. Nothing says danger quite like getting up close and personal with a pissed-off volcano, and what better way to venture to the Pacific Rim of Fire than on skis? If you have a fantasy apocalypse team comprised of ride-or-die road dogs, you probably won't be fully satisfied until you ski through deathly lava spewing out of a mountain top. Oh My Deus: “The Smirk” is Jeremy Tagand’s Latest Addition to the Deus ex Machina Dynasty — KNSTRCT - Carefully Curated Design News.

Rescued from a Queensland Shed, this cheeky Yamaha SR was given a custom makeover that will have you laughing all the way to the beach. Resurrecting 1940s custom motorcycle philosophy, Deus exploded onto the Australian scene in 2006. Bolstering an enthusiasm for turning a simple machine into an individual, expressive work of art, Deus designs embody an appreciation for creativity and cultural celebration. How 33 Famous Brands Got Their Names. Email For those who haven’t had a chance to see my original article explaining brand name origins on BoredPanda, I’m reposting it here.

30 Untranslatable Words From Different Languages Illustrated By Anjana Iyer. EmailEmail New Zealand-based media designer Anjana Iyer searched through languages around the world for various interesting words that have no direct translation into English and attempted to capture their meanings with refined and humorous illustrations. The posters from her “Found in Translation” project provide literal explanations of the words’ meanings as well.

The tongue-in-cheek illustration series is part of the “100 Days Project”, a web-based platform that invites various aspiring and acknowledged artists to repeat their chosen creative activity for 100 days, documenting their results on the project’s site. Bez makijażu, bez stylisty - gwiazdy Hollywood, wielkoformatowym aparatem Polaroid sfotografował Chuck Close - Warte uwagi. See These Rare Photos Of Remote Tribes Before They Disappear. Guet administers ink in mesmerizing slow motion tattoo footage. May 06, 2014 guet administers ink in mesmerizing slow motion tattoo footage guet administers ink in mesmerizing slow motion tattoo footageall gifs © designboom / courtesy of guet paris-based tattoo artist guet is filmed at work, administering ink onto an arm in a mesmerizing slow motion video. the short film captures the hypnotizing movement of the gun’s pointed needle puncturing the skin, carefully delivering liquid color into the malleable flesh. long strokes forming solid lines are played with a delay, exhibiting the meticulous effort required of the artist. short, stabbing jabs are a cringe-worthy reminder of the possible pain that accompanies the experience. both revelatory and fascinating, the video below describes the practice with an exclusive and uncommon tone of creativity and beauty. slowmotion tattoovideo courtesy of GueT deep carefully delivering liquid color into the skin.