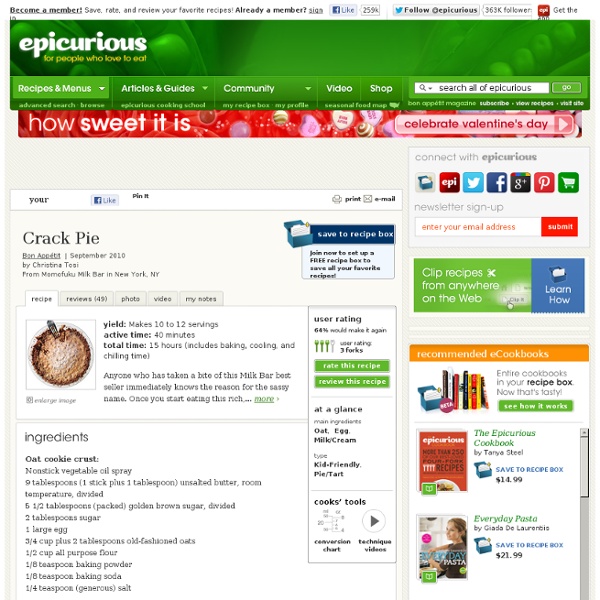 photo by Christopher Griffith yield Makes 10 to 12 servings active time 40 minutes total time 15 hours (includes baking, cooling, and chilling time) Anyone who has taken a bite of this Milk Bar best seller immediately knows the reason for the sassy name. Once you start eating this rich, salty-sweet pie with its oat cookie crust, you won't be able to stop. Preparation For oat cookie crust: Preheat oven to 350°F. Using hands, crumble oat cookie into large bowl; add 3 tablespoons butter and 1 1/2 tablespoons brown sugar. For filling: Position rack in center of oven and preheat to 350°F. Sift powdered sugar lightly over top of pie.

How to Make a Pie A double-crust fruit pie to be precise. For double-crust pies are made by a slightly different method than open-faced pies. Unlike open-faced pies, double-crust pie crusts are not “blind”-baked (i.e. partially baked without the filling inside). The thing that prevents so many talented bakers and cooks from attempting homemade pie is fear of crust. Another misconception most pie bakers have is that a dough must be rock-hard, right out of the fridge when you start to roll it. I realize of course that these reassurances still won’t be enough for a lot of folks, especially when it comes to picking the dough up and shaping the crust (they fear they need one of those silly giant pie spatulas). So then, start by laying down two sheets of overlapped plastic wrap on your cutting board like so: Flour it well, then put down your ball of dough (half the original ball…remember this is a two-crust pie), then dust again with flour. Getting some tears? …and stick’em back together.

Food Pyramids: What Should You Really Eat? - What Should You Eat? Table of Contents Introduction: The Best Guides to a Healthy Diet Nearly two decades ago, the U.S. Department of Agriculture (USDA) created a powerful icon: the Food Guide Pyramid. This simple illustration conveyed in a flash what the USDA said were the elements of a healthy diet. Tragically, the information embodied in this pyramid didn’t point the way to healthy eating. The USDA retired the Food Guide Pyramid in 2005 and replaced it with MyPyramid—basically the old Pyramid turned on its side, sans any explanatory text. The good news is that these changes have dismantled and buried the original, flawed Food Guide Pyramid and its underwhelming MyPyramid successor. As an alternative to the USDA’s nutrition advice, faculty members at the Harvard School of Public Health built the Healthy Eating Pyramid. Now it’s time to translate that research to your dinner plate: the Healthy Eating Plate. Building MyPyramid and MyPlate In the children’s book Who Built the Pyramid? The Healthy Eating Pyramid

Cheesecake Filled Chocolate Easter Eggs It's hard to believe Easter is just around the corner. This year is going too fast for me to keep up! I swear it felt like yesterday that I was laughing at how quickly the Easter displays went up to replace the Christmas stuff at the beginning of the year, it has managed to creep up on me. My days are getting busier and busier, so I am easily drawn to the simpler, quicker desserts that I can pull together at the last minute. This recipe could not be any easier; there's no baking involved and it takes hardly any time to create these cute Cheesecake-Filled Chocolate Easter Eggs with a 'yolk' made of passionfruit sauce. I took it as a compliment when Lisa (who hates eating eggs) said that these looked so much like real eggs that she was a little creeped out by them. I used my regular chilled cheesecake filling recipe for this, and made up a sauce using passionfruit pulp, apricot jam and a little bit of butter. Alright, I admit I may have taken a few too many photos of these little treats.

Paule Caillats Brown Butter Tart Crust - Blog - food52 - food community, recipe search and cookbook contests Every Wednesday, food52's Senior Editor Kristen Miglore is unearthing recipes that are nothing short of genius. This week: a tart crust that loves you back, from Parisian pastry expert Paule Caillat. Sometimes it's fun to be bossed around by your pastry. There's something gratifying about signing a sadomasochistic agreement with butter and flour and water and ending up with pie. But -- and this is especially true for novice bakers and anyone prone to panicking in the face of dough -- it's also nice to take it easy, skip a few of the more traditionally gruelling steps, and still end up with pie. And there isn't a friendlier, more easy-going pastry dough than Paule Caillat's family recipe for pate sucree. Caillat (above), founder of Promenades Gourmandes, a cooking school in Paris, was taught this recipe by her husband's grandmother and her sister (who had studied at Le Cordon Bleu in the 1930s but learned this method from a neighbor). Paule Caillat's Brown Butter Tart Crust Follow

Apple Pie Baked in the Apples | Chronicles of a Domestic Dilettante As you all know, I am very much a beginner in the kitchen. So when my friends assigned both appetizers AND dessert to me for this year’s Thanksgiving, I was in full panic mode as I didn’t want to ruin our entire Thanksgiving dinner. Dessert, afterall, is the most important part of the meal. Furthermore, I was instructed that store-bought items were not welcome – because we all know I was already planning a trip to Whole Foods. After consulting Pinterest for some Apple Pie recipes, I came across this recipe for Apple Pie Baked in the Apple – I thought it was a nice blend of simple instructions and a gourmet look. I’m always a fan of things that look more impressive than they actually are. Step 1: Cut off the top of 4 apples off and discard. If you’re a skilled interior apple excavator, salvage as much as you can so you can use it for Step 2. This recipe will make 4 baked apple pies (in the apple). Step 2: Remove skin from remaining apple(s) and slice very thinly. How neat does that look?

Snickurtle Pie: Snickers meet Turtles Snickers and Turtles Pie. Can we call it Snickurtle ??? I don’t know what/who/how to name this pie… it’s a pie where a snickers bar and a turtle candy meet and make a baby. Then their baby is frozen. And then that baby will soon become your new favorite ice cream/pie/cheesecake. But there isn’t an actual snickers bar nor a turtle candy in there. Look at that delicious mess! I got this recipe from a friend’s mom. I hunted her down a few days after my shower and we finally got her mom to give up the recipe. Like 5 hours. The first time I made it I inhaled it; no surprise there. The next time I made it my dad and I wolfed it down in one sitting. We plan to repeat that today. Snickurtle Pie: Snickers meet Turtles Ingredients Instructions In a mixing bowl mix together the crumbs and melted butter; press onto the bottom and up the sides of a 9-inch pie plate. I’m linking this up to Foodbeast. Happy Father’s Day!

Lunch Recipes for Health Andrew Scrivani for The New York TimesBroccoli, Cabbage and Kohlrabi Coleslaw With Quinoa Many people who have chimed in on the Recipes for Health page on Facebook have requested recipes for lunches they can take to work and eat at a desk, writes Martha Rose Shulman. Here she offers a week’s worth of light and simple ideas for dishes that travel well. Tuna, Chickpeas and Broccoli Salad With Yogurt Dressing: Inspired by the classic Italian combination of tuna and beans. Egg Salad and Greens Wrap: These delicious wraps can be made with the whole-wheat lavash found in Middle Eastern markets; beet greens and Swiss chard are both good choices. Black Rice and Red Lentil Salad: This colorful mixture is hard to resist, with its contrasting chewy and crunchy textures and a nutty Asian dressing. Israeli Couscous and Chickpea Salad: You can find a whole-wheat version of the spherical couscous marketed as Israeli couscous in some whole foods and Middle Eastern markets.

Pumpkin Cream Cheese Truffles Thursday, October 30, 2008 Pumpkin Cream Cheese Truffles **UPDATE** I originally made these in 2008, back in my early stages of blogging. There seems to be a renewed interest in them, and since it had been 3 years since I made them, I decided to make them again and have a new photo shoot. You get new pretty pictures to look at, I get to eat these truffles again. It’s a win/win situation. I tried to come up with a creative/catchy title for this post. The mixture is really soft, and I highly suggest putting it in the fridge before for 30 minutes or so until you roll them into balls. PrintSave Pumpkin Cream Cheese Truffles Yield: Approximately 18, depending on how large or small you roll them. Ah yes… the old point & shoot pictures.

Smore Pie with Peanut Butter-Graham Cracker Crust It’s almost summer, which means it time for fun outdoor activities like camping, hiking, and BBQs. The classic summer treat? S’mores, of course! Everyone loves them so I decided to turn them into a more elegant dessert I could serve at patio parties to adults and kids alike, so I came up with this pie recipe for S’mores Pie. It’s an easy recipe and a huge crowd-pleaser. serves: 12 Ingredients: 12 whole graham crackers. 1/3 cup granulated sugar ½ teaspoon salt ½ cup melted, unsalted butter 2 tablespoons creamy peanut butter 1 ½ cups semi-sweet chocolate chips 1 cup heavy cream 1 ½ cups small marshmallows Preparation: Step 1: Preheat the oven to 375 degrees. Step 2: Pour the crumbs into a medium mixing bowl and combine with the sugar, salt, melted butter and peanut butter. Step 3: Gently press the mixture into a 9½ inch pie plate or tart pan. Step 4: Bake for ten minutes and then set aside to cool completely, for about 1 hour. Step 5: While the pie crust is baking, make the filling.

Banoffee Pie When Andy and I lived in England, we would visit his grandparents nearly every weekend for a roast dinner. I could wax poetic about Nanny’s roast dinner for ages, but you can read about it here. Nanny made everything from scratch, but she rarely made dessert. I must take after my English nanny, because until last weekend I had never made Banoffee pie either. “Banoffee” pretty much speaks for itself: banana & toffee. And don’t worry, this pie isn’t about perfection. Simple Banoffee PieServes 6 to 8 1 can (14 ounces) sweetened condensed milk, label removed 1 ¼ cups graham cracker crumbs 6 tablespoons sugar, divided 5 tablespoons butter, melted 2 large (or 3 medium) bananas, sliced 1 ½ cups chilled heavy cream 1 teaspoon vanilla extract ½ cup shaved (or chopped) semi- or bittersweet chocolate Set sweetened condensed milk can in a medium saucepan with water to come ¾ of the way up. Meanwhile, adjust oven rack to lower middle position and heat oven to 325 degrees.