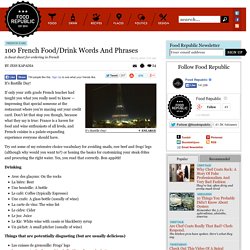 If only your 10th grade French teacher had taught you what you really need to know — impressing that special someone at the restaurant where you’re maxing out your credit card. Don’t let that stop you though, because what they say is true: France is a haven for food and wine enthusiasts of all levels, and French cuisine is a palate-expanding experience everyone should have. Try out some of my extensive choice vocabulary for avoiding snails, raw beef and frogs’ legs (although why would you want to?) Or honing the basics for customizing your steak-frites and procuring the right water. Yes, you read that correctly. Drinking Avec des glaçons: On the rocks La biére: Beer Une bouteille: A bottle Le café: Coffee (typically Espresso) Une crafe: A glass bottle (usually of wine) La carte de vins: The wine list Le cidre: Cider Le jus: Juice Le Kir: White wine with cassis or blackberry syrup Un pichet: A small pitcher (usually of wine)

French Châteaus for Sale. International Food Etiquette Customs To Know Before You Travel. China_faq_1.jpg (1612×1113) Edo Japan, A Virtual Tour. Asakusa Bell of Time. During the Edo period, the time in Japan was announced with bell chimes. 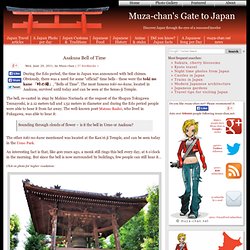 Obviously, there was a need for some “official” time bells - these were the toki no kane 「時の鐘」, “Bells of Time". The most famous toki-no-kane, located in Asakusa, survived until today and can be seen at the Senso-ji Temple. The bell, re-casted in 1692 by Makino Narisada at the request of the Shogun Tokugawa Tsunayoshi, is 2.12 meters tall and 1.52 meters in diameter and during the Edo period people were able to hear it from far away. The well-known poet Matsuo Bashō, who lived in Fukagawa, was able to hear it: Sounding through clouds of flower – is it the bell in Ueno or Asakusa? The other toki-no-kane mentioned was located at the Kan’ei-ji Temple, and can be seen today in the Ueno Park. An interesting fact is that, like 400 years ago, a monk still rings this bell every day, at 6 o’clock in the morning. Click on photo for higher resolution: Japanese Etiquette: How to Save Yourself from Embarrassment in Japan.

Did you know that it is extremely rude to rub your chopsticks together? 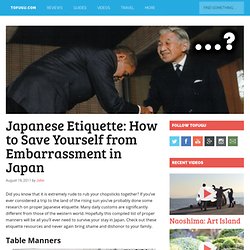 If you’ve ever considered a trip to the land of the rising sun you’ve probably done some research on proper Japanese etiquette. Many daily customs are significantly different from those of the western world. Hopefully this compiled list of proper manners will be all you’ll ever need to survive your stay in Japan. Check out these etiquette resources and never again bring shame and dishonor to your family. Table Manners Because eating is hard. Did you know that pouring soy sauce on your white rice is considered bad manners? In the House Because not wearing shoes is hard. Did you know that shoes are not worn inside Japanese homes, and that there is even a separate set of slippers worn exclusively in the bathroom?

Public Bath Etiquette Because being naked is hard. Paris for the Indie Traveler. Traveling to Paris? 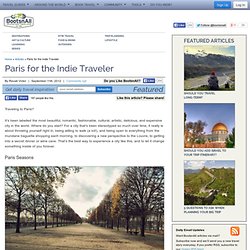 It’s been labelled the most beautiful, romantic, fashionable, cultural, artistic, delicious, and expensive city in the world. Where do you start? For a city that’s been stereotyped so much over time, it really is about throwing yourself right in, being willing to walk (a lot!) , and being open to everything from the mundane baguette shopping each morning, to discovering a new perspective to the Louvre, to getting into a secret dinner or wine cave.

That’s the best way to experience a city like this, and to let it change something inside of you forever. Paris Seasons Mild and moderately wet, Paris’ yearly average temperature is just under 55F (12 C), going below 32F (0C) in winter and over 85F (30C) in the summer. Accommodation in Paris Where to stay in Paris really depends on your budget and interests. Hostels- The cheapest option (as low as 17 Euros), hostels are a great pick if you’re all about sharing space and staying out for most of the day. Getting around.