How did feathers evolve? - Carl Zimmer. The game theory of life. Original story reprinted with permission from Quanta magazine, an editorially independent division of SimonsFoundation.org, whose mission is to enhance public understanding of science by covering research developments and trends in mathematics and the physical and life sciences. 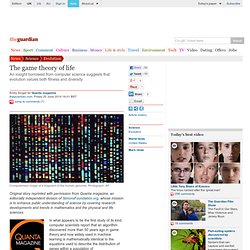 In what appears to be the first study of its kind, computer scientists report that an algorithm discovered more than 50 years ago in game theory and now widely used in machine learning is mathematically identical to the equations used to describe the distribution of genes within a population of organisms. Researchers may be able to use the algorithm, which is surprisingly simple and powerful, to better understand how natural selection works and how populations maintain their genetic diversity. By viewing evolution as a repeated game, in which individual players, in this case genes, try to find a strategy that creates the fittest population, researchers found that evolution values both diversity and fitness.

What Came First, The Chicken Or The Egg? Meet Your Inner Fish—and a few other animals left inside you. Neil Shubin's day job consists of two apparently unrelated tasks. 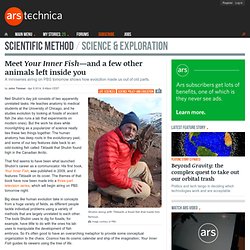 He teaches anatomy to medical students at the University of Chicago, and he studies evolution by looking at fossils of ancient fish (he also runs a lab that experiments on modern ones). But the work he does while moonlighting as a popularizer of science neatly ties these two things together. Rise of Animals: David Attenborough explores evolution of vertebrates. The first episode of David Attenborough's two-part documentary, Rise of Animals: Triumph of the vertebrates, airs tonight at 9pm on BBC 2Sir David explores the origins of the backbone by studying a tiny prehistoric animal and a living fossil living in the south of EnglandThe documentary uses CGI animation to bring long-dead creatures to life such as the Tiktaalik and famous feathered dinosaur It sees Sir David filming for the first time in China, where he sees the fossils that are changing the face of palaeontology. 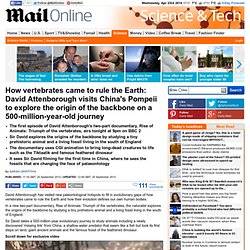 Origin of organs: Thank viruses for your skin and bone - life - 27 February 2014. NEXT time you have a cold, rather than cursing, maybe you should thank the virus for making your skin. 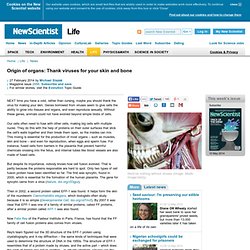 Genes borrowed from viruses seem to give cells the ability to grow into tissues and organs, and even reproduce sexually. Without these genes, animals could not have evolved beyond simple blobs of cells. Our cells often need to fuse with other cells, making big cells with multiple nuclei. They do this with the help of proteins on their outer surfaces that stick the cell's walls together and then break them open, so the insides can mix. This mixing is essential for the production of most organs – such as muscles, skin and bone – and even for reproduction, when eggs and sperm fuse.

But despite its importance, nobody knows how cell fusion evolved. Nature Magazine: Evolution Articles June 2013. Nature Magazine: Evolution Articles July 2013. Handy Genetic Switch Helps You Grow Hands—or Paws, or Fins - Blog. When an enormous four-finned fish surfaced in a South African fisherman’s catch in 1938, scientists were fascinated by its resemblance to fossilized creatures that had died out millions of years ago. 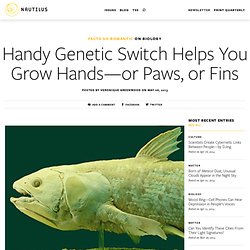 The fish, called a coelacanth, turned out to be the first descendant of those organisms ever spotted by humans. The two living species identified since then are so rare, and so elusive, that only a few specimens have ever made their way into labs. But those scant samples have been enough to hook scientists: On the family tree of life, we are more closely related to the coelacanth than to almost all other fish, which means that its genome can provide crucial information about what changed in our ancestors so they could survive on the shore.

The coelacanth’s genome has been hard to get at, as the only tissue scientists have to work with is a few rotting lumps of fish meat, many decades-old, shuttled between freezers and among researchers like jewels. Natural Selection Seems To Favor Slower Snails. May 11, 2009 Everything is coming up roses for snails with slower metabolic rates, Chilean researchers have found. This is the first instance that natural selection has chosen this trait in any kind of species. These snails have a leg up over others because they reserve more energy for other actions like growth or mating, says the findings, available in the journal Evolution. Roberto Nespolo and Paulina Artacho from the Southern University of Chile reviewed an old hypothesis called the “energetic definition of fitness”. The fin that led to the foot: Researchers find fossils showing fish evolving. 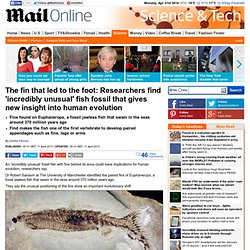 Origins of alcohol consumption traced to ape ancestor. BOSTON — The taste for alcohol may be an ancient craving. 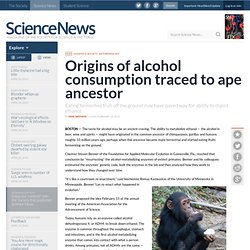 The ability to metabolize ethanol — the alcohol in beer, wine and spirits — might have originated in the common ancestor of chimpanzees, gorillas and humans roughly 10 million years ago, perhaps when this ancestor became more terrestrial and started eating fruits fermenting on the ground. The ability to metabolize ethanol might have arisen in the common ancestor of chimpanzees (shown), gorillas and humans as this ancestral ape became more terrestrial and started to eat fermenting fruits on the ground, a chemist proposes. Astonishing 3D images reveal the first four-legged land animals in amazing detail - and overturn a century of research. High resolution X-ray images expose rock-encased fossilsFindings have implications for understanding how backbones evolvedTextbooks will have to be re-written, say scientists behind the study By Lewis Smith. 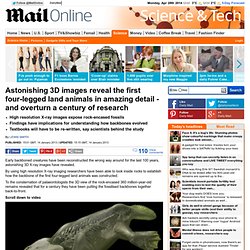 Why I Am Not Celebrating "Darwin Day" - Brainstorm. Charles Robert Darwin, the great English naturalist and author of On the Origin of Species, was born on February 12, 1809. 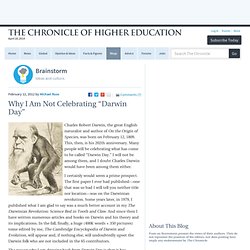 This, then, is his 202th anniversary. Many people will be celebrating what has come to be called “Darwin Day.” I will not be among them, and I doubt Charles Darwin would have been among them either. I certainly would seem a prime prospect. The first paper I ever had published—one that was so bad I will tell you neither title nor location—was on the Darwinian revolution. Is Evolution Predictable? If one could rewind the history of life, would the same species appear with the same sets of traits? 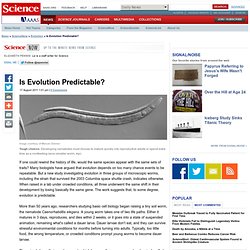 Many biologists have argued that evolution depends on too many chance events to be repeatable. But a new study investigating evolution in three groups of microscopic worms, including the strain that survived the 2003 Columbia space shuttle crash, indicates otherwise. When raised in a lab under crowded conditions, all three underwent the same shift in their development by losing basically the same gene. The work suggests that, to some degree, evolution is predictable.

More than 50 years ago, researchers studying basic cell biology began raising a tiny soil worm, the nematode Caenorhabditis elegans. Life on Earth bubbled out of a volcano in Greenland 3.8 billion years ago, say scientists. By Tamara Cohen Updated: 03:48 GMT, 28 October 2011 A 'black smoker' underwater geyser - previously, scientists thought these vents were the source of life on Earth, but a new study suggests that undersea volcanoes offered the perfect recipe for life to begin. Man's remotest relative and one of the world's oldest organisms found - in the sludge of a lake in Norway. Creature is 'new category' of organismEvolved about a billion years agoMicroscopic creature in lake in Norway, eats algae By Ruth Whitehead Published: 16:19 GMT, 28 April 2012 | Updated: 13:47 GMT, 30 April 2012 Scientists say they have found one of the world's oldest living organisms and man's remotest relative - after spending two decades examining a microscopic algae-eater that lives in a lake in Norway.

Shrinking is a much faster process, however. Large-scale reductions in size leading to dwarfism only take around 100,000 generations. Dinosaurs may have been WARM BLOODED, say scientists after study of today's animal bones. Markings on bones DON'T prove that animals are cold- or warm-bloodedOnly evidence that dinosaurs were cold-blooded By Rob Waugh Published: 18:01 GMT, 27 June 2012 | Updated: 18:01 GMT, 27 June 2012. Evolution: Videos for Students: Evolving Ideas. Why Is a Pelican Like a Whale? Pelicans and whales are not especially close relatives. What Darwin Never Knew. Simple worms are closet brainiacs - life - 14 March 2012.

The great-grandfather clock: Scientists find mechanism which controls our sleep began 2.5 BILLION years ago. Research Shows Missing DNA Makes Us Human. March 10, 2011. Bill Nye: "Creationism is not Appropriate for Children" Animal Evolution Theory Altered. October 13, 2012. How Did Insect Metamorphosis Evolve? In the 1830s a German naturalist named Renous was arrested in San Fernando, Chile for heresy. Giant Insects Ruled The Sky Until Evolution Of Birds Kicked In. June 5, 2012 Image Caption: This fossil insect wing (Stephanotypus schneideri) from the period about 300 million years ago when insects reached their greatest sizes, measures 19.5 centimeters (almost eight inches) long. The largest species of that time were even bigger, with wings 30 centimeters long.

Evolution Is A Matter Of Brawn Vs Brain. October 16, 2012. Supplementary Materials forBilaterian Burrows and Grazing Behavior at >585 Million Years Ago. Mushrooms may have stopped coal from forming 300 million years ago - and discovery could be key to creating new biofuels. Wikipedia: Geological Time Spiral. Bilaterian Burrows and Grazing Behavior at >585 Million Years Ago. Earth History And Evolution. Scientist searches for clues about the beginnings of life. First creature to walk on land 'dragged itself along' - like it was on crutches. Do some cultures have their own ways of going mad? Scientists discover possible building blocks of ancient genetic systems in Earth's most primitive organisms.

Glossy plumage of Microraptor shows feathers evolved for courtship. So THAT'S why tigers have stripes (and leopards have spots): Scientists prove famous theory 60 years on. Ancient sea sponge fossils could push back existence of animal life by 90million years. Strange animals may have their own distinct nervous system. Strange gelatinous creature gives hints of the first animals on Earth.