History of Retailing - Industry Studies, Business. Www.kpmg.com/CN/en/IssuesAndInsights/ArticlesPublications/Documents/Evolution-retailing-o-200912.pdf. A Brief History of Shopping with Shops, Stores and Supermarkets. A busy, modern-day Supermarket History and Development of Supermarkets and Shopping In most towns or villages there is usually at least one shop within reasonable distance of where people live. Men and women who keep shops are known as shopkeepers and their occupation as shopkeeping. As we know it today shopkeeping has developed through a number of different stages. The earliest form was the market that was held in important centres where roads crossed and goods could easily be exchanged. The next step forward was made when the market traders took on permanent premises. However, about 1820 shops were being started in Britain which sold many different types of goods all under one roof.

At the same time the multiple store grew up. Another type of shop was the variety store like Woolworth's or Marks and Spencer's. Supermarkets started out as simply large collective markets under one roof selling a broad range of groceries, fruit and vegetables. Faculty.quinnipiac.edu/charm/dept.store.pdf.

Retail. A retail store in the UK Shopping generally refers to the act of buying products. 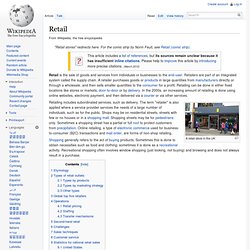 Sometimes this is done to obtain necessities such as food and clothing; sometimes it is done as a recreational activity. Recreational shopping often involves window shopping (just looking, not buying) and browsing and does not always result in a purchase. Etymology[edit] Retail comes from the Old French word tailler, which means "to cut off, clip, pare, divide" in terms of tailoring (1365). Types of retail outlets[edit] Inside a supermarket in Russia A marketplace is a location where goods and services are exchanged.

What is the brief history of retail business. CONSUMERS, SHOPS, SMALL BUSINESSES AND ECONOMIC LIFE IN THE DEVELOPING WORLD (THIRD WORLD) Market in Africa Developing world economies are very cash oriented. Cash is used for most transactions. Shopping Innovations The History of the Shopping Mall. Shopping Innovations By Mary Bellis The MallA shopping center, shopping mall, or shopping plaza, is the modern adaptation of the historical marketplace. 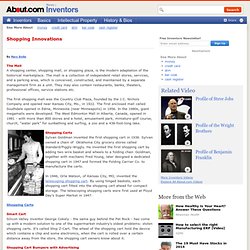 The mall is a collection of independent retail stores, services, and a parking area, which is conceived, constructed, and maintained by a separate management firm as a unit. They may also contain restaurants, banks, theaters, professional offices, service stations etc. The first shopping mall was the Country Club Plaza, founded by the J.C. Shopping CartsSylvan Goldman invented the first shopping cart in 1936. In 1946, Orla Watson, of Kansas City, MO, invented the telescoping shopping cart. Shopping Carts Smart CartSilicon Valley inventor George Cokely - the same guy behind the Pet Rock - has come up with a modern solution to one of the supermarket industry's oldest problems: stolen shopping carts. Automatic DoorsHorton Automatics developed and sold the first automatic sliding door in America in 1960.

N'est pas accessible. Early Retail Timeline - Retail Research Centre - shopperdoodledoo.co.uk. The Development of Shops and Stores in the UK This rather long page tries to do two things: give a timeline of retail businesses; and secondly to show that many staggeringly novel innovations were not all that new. 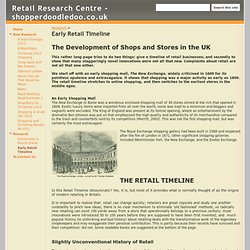 Complaints about retail are not all that new either. We start off with an early shopping mall, The New Exchange, widely criticised in 1609 for its pointless opulence and extravagance. It shows that shopping was a major activity as early as 1609. The retail timeline stretches to online shopping, and then switches to the earliest stores in the middle ages. An Early Shopping MallThe New Exchange or Burse was a wondrous enclosed shopping mall of 30 stores aimed at the rich that opened in 1609. The Royal Exchange shopping gallery had been built in 1568 and reopened after the fire of London in 1671. THE RETAIL TIMELINEIs this Retail Timeline idiosyncratic? Slightly Unconventional History of Retail 1568 The Royal Exchange shopping gallery was opened.