Optimizing Algae Biofuels: Applied Natural Selection to Improve Lipid Synthesis. IntroductionMicroalgae hold great potential as a renewable source of oil for biofuel production, but there are many inherent difficulties involved in making their use commercially viable (Singh and Gu, 2010). 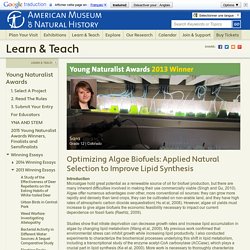 Algae offer numerous advantages over other, more conventional oil sources: they can grow more rapidly and densely than land crops, they can be cultivated on non-arable land, and they have high rates of atmospheric carbon dioxide sequestration( Hu et al, 2008). However, algae oil yields must increase to give algae biofuels the economic feasibility necessary to impact our current dependence on fossil fuels (Raehtz, 2009). Studies show that nitrate deprivation can decrease growth rates and increase lipid accumulation in algae by changing lipid metabolism (Wang et al, 2009). My previous work confirmed that environmental stress can inhibit growth while increasing lipid productivity. Engineers develop new yeast strain to enhance biofuel and biochemical production. Researchers in the Cockrell School of Engineering at The University of Texas at Austin have used a combination of metabolic engineering and directed evolution to develop a new, mutant yeast strain that could lead to a more efficient biofuel production process that would make biofuels more economically competitive with conventional fuels. 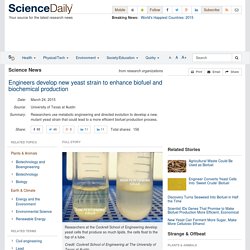 Their findings were published online in the journal Metabolic Engineering in March. Beyond biofuels, the new yeast strain could be used in biochemical production to produce oleochemicals, chemicals traditionally derived from plant and animal fats and petroleum, which are used to make a variety of household products. NESCent: Education & Outreach: Postcasts. Evolution in the News Evolution may seem like something that happened a long time ago, and as such it can be difficult for students to see the relevance to their own lives. 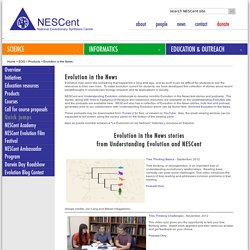 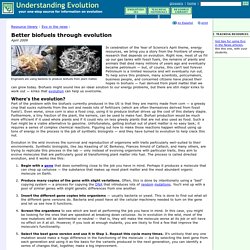 Part of the problem with the biofuels currently produced in the US is that they are mainly made from corn — a greedy crop that sucks nutrients from the soil and needs lots of fertilizers (which are often themselves derived from fossil fuels!). Even worse, since corn is also a food crop, using it to produce biofuel drives up the cost of this dietary staple. Want a new drug? Look to evolution. Resource library : Evo in the news : Want a new drug? 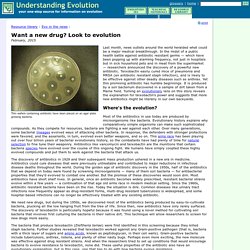 Look to evolutionFebruary, 2015 Thin wafers containing antibiotic have been placed on an agar plate growing bacteria. Last month, news outlets around the world heralded what could be a major medical breakthrough. Tracking SARS back to its source. Resource library : Evo in the news : Tracking SARS back to its sourceJanuary 2006, updated July 2013 The previously unknown SARS virus generated widespread panic in 2002 and 2003 when the airborne germ caused 774 deaths and more than 8000 cases of illness. 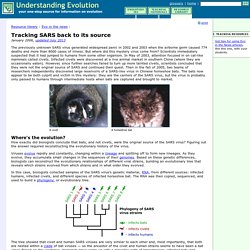 But where did this mystery virus come from? Scientists immediately suspected that it had jumped to humans from some other organism. In May of 2003, attention focused in on cat-like mammals called civets. Where's the evolution? Viruses evolve rapidly and constantly, changing within a lineage and splitting off to form new lineages. In this case, biologists collected samples of the SARS virus's genetic material, RNA, from different sources: infected humans, infected civets, and different species of infected horseshoe bat. Interestingly, viruses seem to frequently make the jump from bats to human hosts. Read more about it. Evolution and the avian flu. Ebola and evolution. Resource library : Evo in the news : Ebola and evolutionOctober 2014 The Ebola outbreak in West Africa has international medical organizations on high alert and people all around the world antsy — even those who live in the Americas and Australia, oceans away from the disease's epicenter. 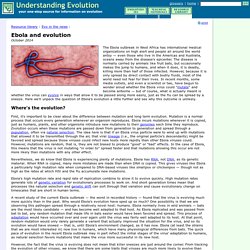 The disease is normally carried by animals like fruit bats, but occasionally makes the jump to humans, and when it does, it is deadly, killing more than half of those infected. However, because it is only spread by direct contact with bodily fluids, most of the world need not fear for their lives. In recent months, some media outlets, and even a scientist or two, have begun to wonder aloud whether the Ebola virus could "mutate" and become airborne — but of course, what is actually meant is whether the virus can evolve in ways that allow it to be passed along more easily, just as the flu can be spread by a sneeze. Genetic engineering vs. evolution. Resource library : Evo in the news : Genetic engineering vs. evolutionApril 2014 The western corn rootworm chews into a plant. 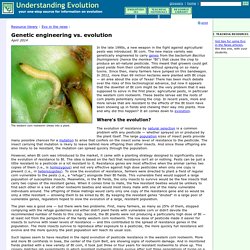 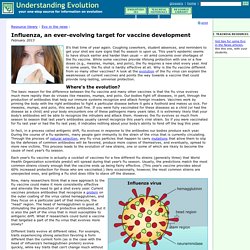 Coughing coworkers, student absences, and reminders to get your shot are sure signs that flu season is upon us. This year's epidemic seems to have struck earlier and harder than usual — all amid concerns over shortages of the flu vaccine. While some vaccines provide lifelong protection with one or a few doses (e.g., measles, mumps, and polio), the flu requires a new shot every year. Climate change causes loss of genetic diversity. Resource library : Evo in the news : Climate change causes loss of genetic diversityApril 2012. 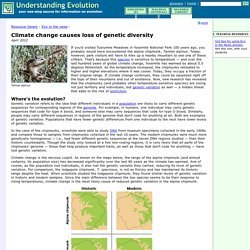 "An antibiotic that exploits evolutionary history" Resource library : Evo in the news : An antibiotic that exploits evolutionary historyOctober 2011 Where's the evolution? Around 1.8 billion years ago, a major divergence occurred among the single-celled organisms that then made up life on Earth. An early bacterium — one which could use oxygen to release energy from sugars — was engulfed by another bacterium.

Through the process of endosymbiosis, this lineage eventually evolved into the eukaryotes (the diverse group which includes animals and plants) and the engulfed bacterium evolved into a cellular organelle (the mitochondrion, the powerhouse of the cell), while the relatives of the engulfed bacterium remained single-celled and evolved into modern bacteria. "When fighting leukemia, evolutionary history matters" Resource library : Evo in the news : When fighting leukemia, evolutionary history mattersDecember 2011. The relevance of evolution. Evolution's Importance to Society. July 2005 Biology is the study of the many varieties of life.

Source: Wikimedia Commons. This century is often called the age or the century of biology. Why? From the origin of life to the future of biotech: The work of Andy Ellington. With his secure defense research facility, robotics lab, and fleet of researchers, University of Texas professor Dr. Andy Ellington might appear to be a CIA scientist building the latest intelligence gadgets for modern day 007s.

In fact, Andy Ellington studies evolution. A self-described evolutionary engineer, he uses evolutionary principles to evolve molecules and organisms that serve all sorts of functions: from warning us of a chemical weapons attack to fighting HIV to detecting cancer. Another perspective on cancer: Evolution within. Why%20is%20it%20important%20to%20teach%20evolution.pdf. Understanding evolution is important. Evolution's Importance to Society.