The Tree of Life may be more like a bush. New species evolve whenever a lineage splits off into several. 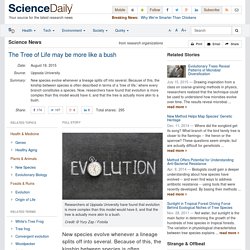 The world's first flower? Plant with no petals that lived underwater is 130 million years old - Science - News - The Independent. The aquatic Montsechia vidalii was once abundant in freshwater lakes in what are now mountainous regions of central and northern Spain. 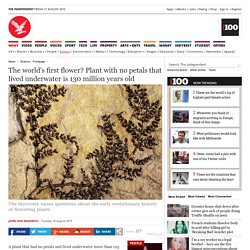 Although discovered more than 100 years ago, the true significance of the fossils has only now become apparent after painstaking analysis by scientists. Cats vs dogs: Scientists confirm that felines are better... from an evolutionary perspective - Nature - Environment - The Independent. A groundbreaking study of 2,000 ancient fossils reveals that felids – the cat family – have historically been much better at surviving than the “canid” dog clan, and often at the latter’s expense. 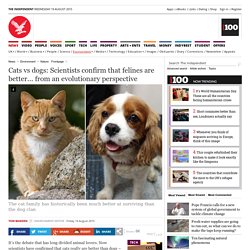 The research finds that cats have played a significant role in making 40 dog species extinct, outcompeting them for scarce food supplies because they are generally more effective hunters. But researchers found no evidence that dogs have wiped out a single cat species. The dog family – which includes the wolves from which today’s domesticated dogs are descended – originated in North America about 40 million years ago and reached a maximum diversity around 20 million years later, when there were more than 30 species on the continent. At that point, the cat family arrived from Asia. “The arrival of cats to North America had a deadly impact on the diversity of the dog family.

Darwin's finches highlight the unity of all life. Animals grow as they evolve: so says science. This week a paper has been published in the journal Science which suggests that the mean size of marine mammals has increased 150-fold in the last 542 million years. 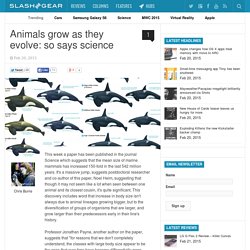 It's a massive jump, suggests postdoctoral researcher and co-author of this paper, Noel Heim, suggesting that though it may not seem like a lot when seen between one animal and its closest cousin, it's quite significant. This discovery includes word that increase in body size isn't always due to animal lineages growing bigger, but to the diversification of groups of organisms that are larger, and grow larger than their predecessors early in their line's history. Calculating evolution. Programme predicts the development of influenza viruses November 12, 2014 For a long time, prognoses forecasting the evolutionary future of organisms were considered mere speculation. 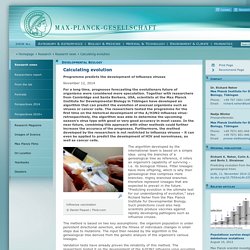 Together with researchers from Cambridge and Santa Barbara, USA, scientists at the Max Planck Institute for Developmental Biology in Tübingen have developed an algorithm that can predict the evolution of asexual organisms such as viruses or cancer cells. What's the Purpose of the Human Hymen? Q: I apologize if this question sounds slightly prurient: What is the evolutionary purpose of the human hymen, and do any other female mammals have such a membrane? 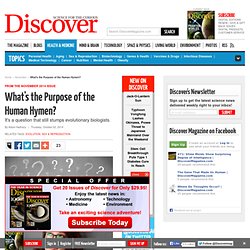 — Joel Gottlieb, Toronto, Canada A: Tough question — the hymen befuddles evolutionary biologists to this day. Does the Theory of Evolution Really Matter? Findings From Tangle-Web Spiders Support Group Evolution. As a rule, spiders are antisocial. 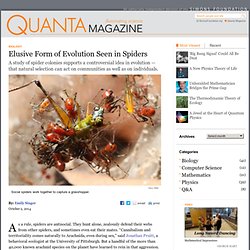 One Bacteria Species Became Two While Inside An Insect. Cicadas eat a simple diet of only plant sap. 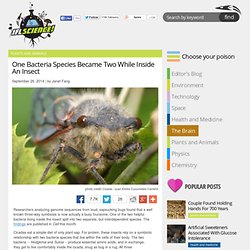 For protein, these insects rely on a symbiotic relationship with two bacteria species that live within the cells of their body. The two bacteria -- Hodgkinia and Sulcia -- produce essential amino acids, and in exchange, they get to live comfortably inside the cicada, snug as bug in a rug. All three organisms divvy up the nutritional roles, so each depend on the others to survive. Burst Of Evolution As Birds Took Wing. Burst Of Evolution As Birds Took Wing. 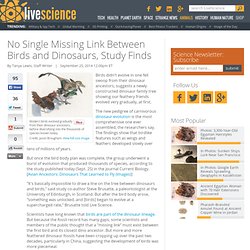 The new pedigree of carnivorous dinosaur evolution is the most comprehensive one ever assembled, the researchers say. The findings show that birdlike features such as wings and feathers developed slowly over tens of millions of years. But once the bird body plan was complete, the group underwent a burst of evolution that produced thousands of species, according to the study published today (Sept. 25) in the journal Current Biology. Medio Ambiente: ¿qué está fallando?  La encuesta europea Eurobarómetro publicada hace unos días indica que "la protección del medio ambiente es importante para la mayoría de los europeos". 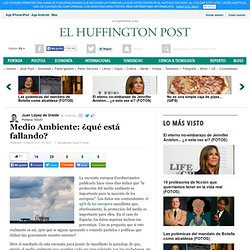 The pond-dwelling, single-celled organism Oxytricha trifallax has the remarkable ability to break its own DNA into nearly a quarter-million pieces and rapidly reassemble those pieces when it's time to mate, the researchers report in the journal Cell. The organism internally stores its genome as thousands of scrambled, encrypted gene pieces.

Upon mating with another of its kind, the organism rummages through these jumbled genes and DNA segments to piece together more than 225,000 tiny strands of DNA. This all happens in about 60 hours. Oxygen-Producing Organisms Appeared 60 Million Years Earlier Than Previously Believed. Complex life on Earth requires oxygen, though carbon dioxide and methane choked the atmosphere during our planet’s early years. Geological samples have yielded evidence of microorganisms that appear to have contributed to the oxygenation of our planet 3 billion years ago. This pushes the first appearance of oxygen-producing lifeforms on Earth back by 60 million years. Unusual Fish that 'Walks' Holds Clues to Animal Evolution.

An unusual species of fish that can walk and breathe air shows that these animals may be more capable of adapting to life on land than previously thought, researchers say. The new findings may help explain how the ancient fish ancestors of humans colonized the land, the researchers said. The evolution of the ancient fish that switched from living in water to living on land about 400 million years ago is one of the most pivotal moments in the history of the animal kingdom. These first four-limbed animals, the so-called stem tetrapods, ultimately gave rise to amphibians, reptiles, birds and mammals, including the largest animals to ever live on the planet. Flowering Plants Appeared in Forest Canopies Just a Few Million Years After Dinosaurs Went Extinct. Taking a minute to smell the flowers isn’t that hard nowadays, but angiosperms (a.k.a. flowering plants) weren’t always as ubiquitous as they are now. They appeared rather suddenly in the fossil record, definitively showing up around 132 million years ago.

Microstructure and Cross-Sectional Shape of Limb Bones in Great Horned Owls and Red-Tailed Hawks: How Do These Features Relate to Differences in Flight and Hunting Behavior? The Red-tailed Hawk and Great Horned Owl are two species of raptor that are similar in body size, diet, and habitat. Both species use their hindlimbs during hunting, but differ in foot morphology, how they approach and immobilize prey, and the average size of prey captured.

They also differ in primary flight style: the Red-tailed Hawk uses static soaring and the Great Horned Owl uses flap-gliding. The objectives of this study were to characterize the microstructure and cross-sectional shape of limb bones of these species and examine the relationship with flight and hunting behaviors. The mid-shaft of six limb bones from six individuals of each species was sampled. The degree of bone laminarity (proportion of circular primary vascular canals) and cross-sectional geometric parameters were calculated. Figures Editor: David Carrier, University of Utah, United States of America. Unusual Fish that 'Walks' Holds Clues to Animal Evolution. Scientists Have Figured Out How Lizards Regrow Their Tails, And That's Good News For Humans. When a lizard loses its tail, it grows back.

How birds got their wings: Fossil data show scaling of limbs altered as birds originated from dinosaurs.