101 Reasons Why Evolution is True. Common descent. In evolutionary biology, a group of organisms share common descent if they have a common ancestor. 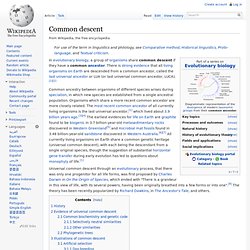 There is strong evidence that all living organisms on Earth are descended from a common ancestor, called the last universal ancestor or LUA (or last universal common ancestor, LUCA).[1][2] Common ancestry between organisms of different species arises during speciation, in which new species are established from a single ancestral population. Organisms which share a more recent common ancestor are more closely related. Universal common descent through an evolutionary process, that there was only one progenitor for all life forms, was first proposed by Charles Darwin in On the Origin of Species, which ended with "There is a grandeur in this view of life, with its several powers, having been originally breathed into a few forms or into one".[8] The theory has been recently popularized by Richard Dawkins, in The Ancestor's Tale, and others. History[edit] Evidence of common descent.

Evidence of common descent of living things has been discovered by scientists working in a variety of fields over many years. 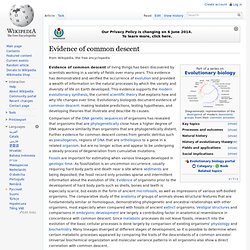 This evidence has demonstrated and verified the occurrence of evolution and provided a wealth of information on the natural processes by which the variety and diversity of life on Earth developed. This evidence supports the modern evolutionary synthesis, the current scientific theory that explains how and why life changes over time. Evolutionary biologists document evidence of common descent: making testable predictions, testing hypotheses, and developing theories that illustrate and describe its causes. Fossils are important for estimating when various lineages developed in geologic time.

As fossilization is an uncommon occurrence, usually requiring hard body parts and death near a site where sediments are being deposited, the fossil record only provides sparse and intermittent information about the evolution of life. Genetics[edit] DNA sequencing[edit] Last universal ancestor. A cladogram linking all major groups of living organisms to the LUA (the black trunk at the bottom). 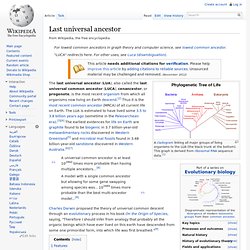 This graph is derived from ribosomal RNA sequence data.[1] A cladogram linking all major groups of living organisms to the LUA (short trunk at the center). This graph is derived from complete genome sequencing data. The last universal ancestor (LUA), also called the last universal common ancestor (LUCA), cenancestor, or progenote, is the most recent organism from which all organisms now living on Earth descend.[2] Thus it is the most recent common ancestor (MRCA) of all current life on Earth. The LUA is estimated to have lived some 3.5 to 3.8 billion years ago (sometime in the Paleoarchean era).[3][4] The earliest evidences for life on Earth are graphite found to be biogenic in 3.7 billion-year-old metasedimentary rocks discovered in Western Greenland[5] and microbial mat fossils found in 3.48 billion-year-old sandstone discovered in Western Australia.[6][7] Features[edit] Hypotheses[edit] 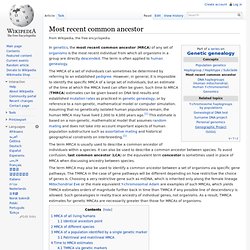 The term is often applied to human genealogy. The MRCA of a set of individuals can sometimes be determined by referring to an established pedigree. However, in general, it is impossible to identify the specific MRCA of a large set of individuals, but an estimate of the time at which the MRCA lived can often be given. Such time to MRCA (TMRCA) estimates can be given based on DNA test results and established mutation rates as practiced in genetic genealogy, or by reference to a non-genetic, mathematical model or computer simulation. The Genius of Charles Darwin. Darwin. Happiest at home with his notebooks and his microscope, he shunned the public eye. 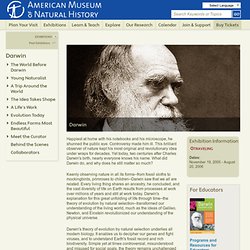 Controversy made him ill. This brilliant observer of nature kept his most original and revolutionary idea under wraps for decades. Yet today, two centuries after Charles Darwin's birth, nearly everyone knows his name. What did Darwin do, and why does he still matter so much? Keenly observing nature in all its forms--from fossil sloths to mockingbirds, primroses to children--Darwin saw that we all are related. Darwin's theory of evolution by natural selection underlies all modern biology. Charles Darwin looked closely at life.

Evolution Library: Evidence for Evolution. Peabody Museum - Tree of Life. Understanding Evolution. The bacteria that changed the world - May, 2017 The make-up of Earth's atmosphere, once the domain of Earth science textbooks, has become an increasingly "hot" news topic in recent decades, as we struggle to curb global warming by limiting the carbon dioxide that human activity produces. 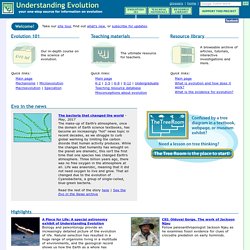 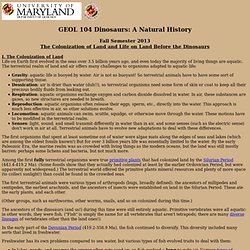 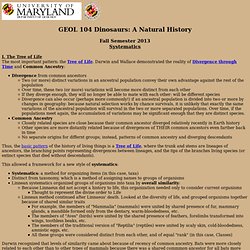 The Tree of Life The most important pattern: the Tree of Life. Darwin and Wallace demonstrated the reality of Divergence through Time and Common Ancestry: Divergence from common ancestors Two (or more) distinct variations in an ancestral population convey their own advantage against the rest of the population Over time, these two (or more) variations will become more distinct from each other If they diverge enough, they will no longer be able to mate with each other: will be different species Divergence can also occur (perhaps more commonly!) Timeline of evolution. 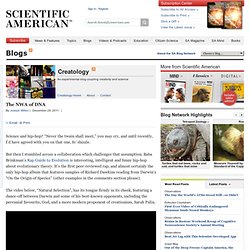 “Never the twain shall meet,” you may cry, and until recently, I’d have agreed with you on that one, fo’ shizzle. But then I stumbled across a collaboration which challenges that assumption. Baba Brinkman’s Rap Guide to Evolution is interesting, intelligent and funny hip-hop about evolutionary theory. Evolution: Isn't Evolution Just a Theory? Evolution: 24 myths and misconceptions - life - 16 April 2008. If you think you understand it, you don't know nearly enough about it It will soon be 200 years since the birth of Charles Darwin and 150 years since the publication of On the Origin of Species, arguably the most important book ever written. 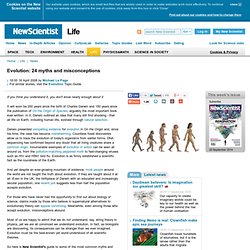 In it, Darwin outlined an idea that many still find shocking - that all life on Earth, including human life, evolved through natural selection. Darwin presented compelling evidence for evolution in On the Origin and, since his time, the case has become overwhelming. Countless fossil discoveries allow us to trace the evolution of today's organisms from earlier forms. DNA sequencing has confirmed beyond any doubt that all living creatures share a common origin. And yet despite an ever-growing mountain of evidence, most people around the world are not taught the truth about evolution, if they are taught about it at all.

History of evolutionary thought. Evolutionary thought, the conception that species change over time, has roots in antiquity, in the ideas of the ancient Greeks, Romans, and Chinese as well as in medieval Islamic science. With the beginnings of biological taxonomy in the late 17th century, Western biological thinking was influenced by two opposed ideas. One was essentialism, the belief that every species has essential characteristics that are unalterable, a concept which had developed from medieval Aristotelian metaphysics, and that fit well with natural theology.